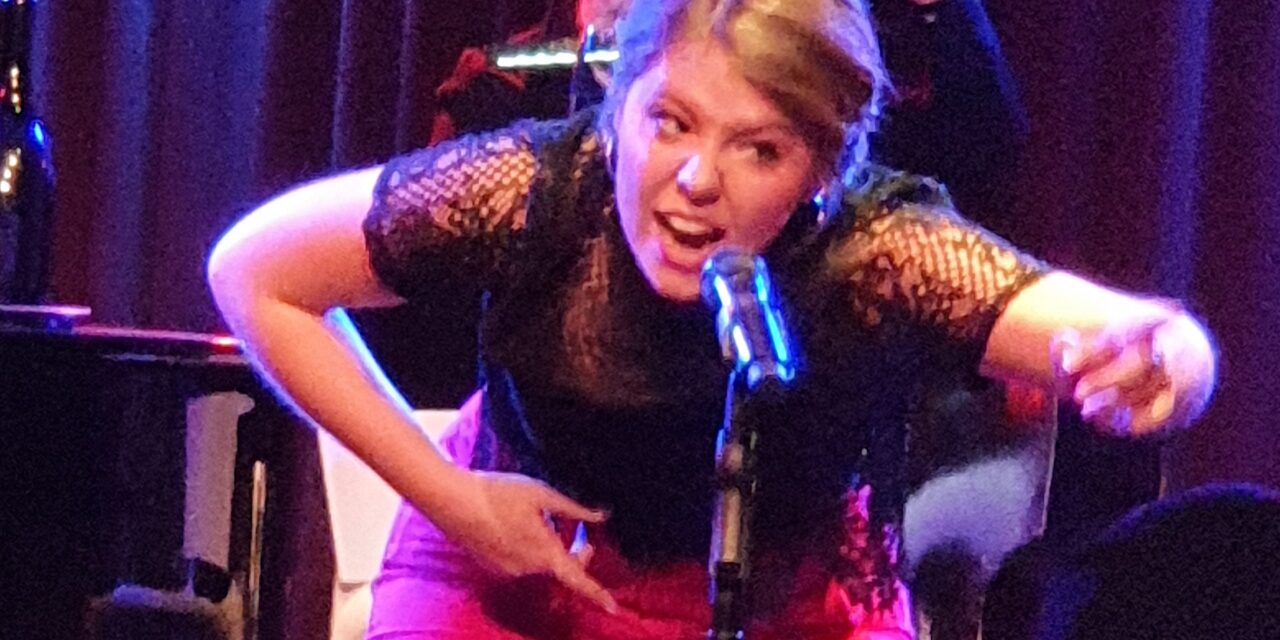 Hannah Jane is a fresh-faced young lady who has been making a name for herself in the New York cabaret scene since her first show, On My Way, in 2018.  This West Virginia native dropped her last name (Peterson) for professional purposes not long ago, and now goes by Hannah Jane, not Hannah.  Hannah Jane has been compared to the young Judy Garland, and for good reason.  Clearly a student of musical theater, she can sing in many styles, can act out a song in an accent where appropriate, and can interpret a lyric and sing from the heart.

Lady Legends of Broadway debuted in early 2020 at Birdland Theater, and on November 12, was the second performance of its restaging at The Green Room 42 where Hannah Jane was accompanied by Jon Weber (Musical Director/Piano), John Miller on Bass and Clint de Ganon on Drums.

“Step into the spotlight and celebrate a cavalcade of Broadway’s legendary ladies,” states the blurb on Amazon for the children’s book A is for Audra, Broadway’s Leading Ladies from A to Z (John Robert Allman).  With the clever device of this actual book to move the story along, Hannah Jane takes on each letter of the alphabet and the legendary ladies mentioned throughout the book, from Audra MacDonald to Liza (“with a Z!”) Minnelli, and, the decidedly manly Bob Fosse, and sings a song associated with that artist.  Some were full songs, sung straight, others were short versions, sometimes acted out or sung with accents or in character.  Still others were brief, funny snippets of songs.  She sang “I Cain’t Say No” (Richard Rodgers/Oscar Hammerstein II) from Oklahoma to represent Christine Ebersole.  Here, she put on her best hillbilly accent.

In a brilliant brief bit, Hannah Jane sang the beginning of Elaine Stritch’s trademark song, “Here’s to the Ladies Who Lunch,” with a glass of “whiskey” in hand.  Realizing the cognitive dissonance of seeing a demure woman who’s too young to drink attempting to pull off a song fit for a mature, blowsy drunk, she stopped the song and said, “I’ll get back to you in forty years.”

Some of the shorter pieces left us longing for the full cut.  For Idina Menzel’s “I’m Not That Girl” (Stephen Schwartz) from Wicked, she sang softly and sweetly, using yet another side of her pliable voice. For songs like “The Greatest Star” (Jule Styne/Bob Merrill) from Funny Girl and “Show Me” Alan Jay Lerner/Frederick Lowe) from My Fair Lady, she used the most powerful parts of her voice.

Hannah Jane even did a brief puppet act, with two goat puppets, while singing “Lonely Goatherd” (Richard Rodgers/Oscar Hammerstein II) from The Sound of Music.  Keeping with the theme of using a children’s book, an adorable little girl named Lucia Isabel Schwartz joined Hannah Jane on stage for, of course, “Little Girls” (Charles Strouse/Martin Charnin) from Annie.  This was a charming, sweet, “aww” moment.  Lucia sang her little heart out sitting on a stool, and sang well, before Hannah Jane joined her to finish the song as a duet.

Hannah Jane has a spectacular, versatile voice.  She can use it for pop, vintage songs, breathy folk songs, and has a powerful and clear soprano for reaching operatic heights.  This must be reiterated because the surprisingly poor sound at this show, which was far superior in prior years, gave the soprano part of her voice a strident quality that does not accurately reflect her vocal nuances.  Likewise, the grand piano took on the fidelity of a transistor radio for the notes above a middle C.  Let it suffice to say these were sound issues that I’m sure will be resolved.

Photos by Andrew Poretz or as indicated