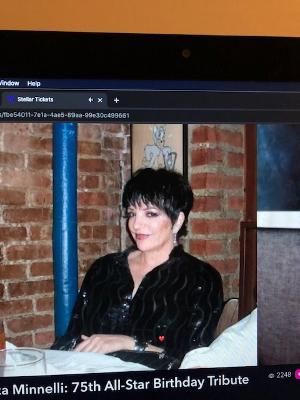 DiLella filled in all the blanks on the star’s history on stage, screen, television. . . and how the pixie cut, red lipped wonder became the muse to designers and especially to Kander and Ebb.

Wishes from near and far  – – celebrities too numerous to mention, poured out endless praise and wishes over the two hour celebration. Some of your favorites included sister Lorna Luft and family, Michele Lee, Shirley MacLaine, Stephanie J. Block, a jazzy Lea DeLaria, Mario Cantone, Susan Stroman, Chita Rivera and Lisa Mordente, Julie Halston, Charles Busch, Nicolas King,  and many who worked with Liza thru the years in so many shows, and now part of Dancers Over 40. There were heartfelt video tributes from Jason Alexander, Bernadette Peters, Nathan Lane and Catherine Zeta-Jones.

From Lily Tomlin to Kathie Lee Gifford, Jane Krakowski, Andrea Martin, Parker Posey, Barbra Streisand, Whoopi Goldberg and Carol Burnett, from Coco Peru to young Nick Ziobro, Kristin Chenoweth singing a powerful “Maybe This Time,” Andrew Rannells, Ute Lemper with a rip roaring “Cabaret” . . . but what rang loud and clear were the descriptive adjectives from so many about Liza . . .  kind, sweet, extraordinary, legendary, timeless, inspirational, no pretenses  . . . all in agreement about this astonishing icon.

Others who sang tributes included the amazing Haley Swindal with “Say Yes,” Billy Stritch who’s worked with Liza forever and played/sang “Teach Me Tonight” – and Jim Caruso whose history with Liza was a stunning revelation of their times together in Hollywood and more. Between Billy and Jim, there’s definitely so much more to be told. I can’t wait for the book – the three musketeers!

Other singing tributes included Melissa Manchester with “Come in From the Rain” and the incomparable Michael Feinstein, who met Liza at her father Vincente Minnelli’s house, giving her credit for catapulting his career, singing “Old Friend.” The unrivaled Ben Vereen took center stage with “Bye Bye Blackbird” with Fosse dancers, as only he can do.

The piece de resistance of the evening, however, was the closing act. . . New York City’s popular cabaret fav Seth Sikes in a one-of-a-kind video tribute (recorded in Puerto Vallarta – my favorite place). He had to do something extraordinary for his idol and he certainly did! Take a look HERE!

As you see, I have nothing but raves to report for Liza’s 75th Birthday Celebration. The talent was over the top amazing as were the production values.

Happy Birthday Liza . . . you are truly loved by many!

Glad to have this LP part of my collection.