A Very Happy, Song-Filled Board Meeting

A star-spangled cast celebrated the Chairman of the Board’s 100th birthday at 54 Below on January 8th. The splendid and diverse show was produced and hosted by Scott Siegel, as always with significant input from his eminence grise and producing partner/wife Barbara. Barbara was the native New Yorker who convinced Scott that the City of St. Louis was not an appropriate place for anyone as appreciative of talent as Scott was to squander his time on this planet.

54 Below tables were packed with both Sinatra and Siegel fans, and the stage overflowed with a something for everybody kaleidoscope of uncommonly attractive, present and future headliners. The icing on this cake was Scott’s interesting commentary about the songs associated with Sinatra and amusing banter about Frank’s behavior. Naturally, many of the attendees were seniors, nostalgically reconnecting the music to memories of their pre-viagra youth.

Zak Resnick, the young star of A Piece of My Heart, opened the celebration with Come Fly With Me. a tune which languished for several decades in the hills of Hollywood until Sammy Cahn lyrics allowed Sinatra to turn it into a major hit. Resnick totally wowed the two young women seated with me, thanks equally to his zesty delivery as well as his sinuous Matthew McConaughey torso.

Carole J. Bufford, spectacularly bedecked in a single shouldered a la Tarzan-ish black, fringed, flapper frock, sang Blue Moon with a sophistication she didn’t pick up in her home town of Lincolnton, GA and also closed the show with a down to earth Birth of the Blues that befitted her southern roots.

Other standouts were Jeff Harnar, mature enough to have heard Sinatra in his prime, who sang All the Way and the last song Sinatra ever performed publicly, The Best is Yet to Come, like Sinatra did, with the lyrics passing through his heart and his brain before they tripped off his tongue. 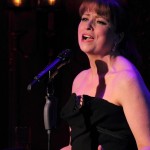 Maxine Linehan, a new American citizen, filled The House I Live In, a plea for racial and religious tolerance commissioned by Sinatra during World War II, with an immigrant’s appreciation and gratitude for the freedom and opportunities found in the US.

The very upbeat and funny Richard Kind, immediately connected with the audience by showing them how well he walked only a few weeks post hip replacement surgery, but he did give me an anxious moment when he briefly forgot the bridge to Young at Heart.

For me the pinnacle of the entire evening was newlywed Scott Coulter’s heartfelt, loving, tribute to the love of his life/husband in My Funny Valentine with lyrics written by another unbelievably talented gay guy, Larry Hart, during a time when everyone pretended the song was written about and for a woman. 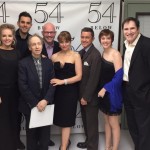 The Sinatra Celebration, in many ways, reminded me of the Siegels Broadway Ballyhoo, which ran the full length of Feinstein’s final open year before moving to the Laurie Beechman Theater and then spending the last half of 2014 at 54 Below. Broadway Ballyhoo is going global and beginning February 1st at 8 pm will be broadcast on the first Sunday of each month from the Terminus Recording Studio in Times Square via Concert Windows. Hopefully it will also return to 54 Below in the flesh.