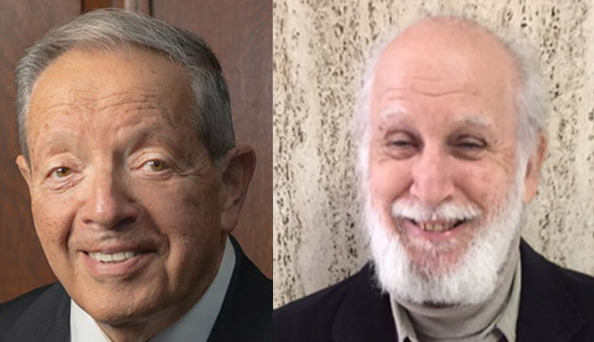 Today’s Special Guest in vocalist/raconteur Harvey Granat’s afternoon series was his customary musical partner, musician David Lahm. A pianist, arranger, and lyricist, Lahm is the son of honoree Dorothy Fields and Trustee of her estate. Rising back and forth from piano to a raised stool, the artist treated us to both music and stories. Dorothy Fields (1905-1974), widely considered America’s leading female lyricist and one of the first to be successful, wrote over 500 songs with 12 composers “…and if you have patience, we’re gonna do’em for you today,” Granat quips. Sired by Comedian/Music Hall owner Lew Fields (of comedy team Weber & Fields), Dorothy segued from youthful poetry to clever yet accessible lyrics and librettos as if destined for the profession. She was the first woman to win an Academy Award (with Jerome Kern) for the song “The Way You Look Tonight” from the film Swing Time.

Composer J. Fred Coots introduced Fields to her first collaborator, Jimmy McHugh. Songs written for the prestigious Cotton Club and performed by the Duke Ellington Band got the pair sufficient exposure to be asked to write for Blackbirds of 1928, an all black revue. “I Can’t Give You Anything But Love” debuted in the show. Granat renders it with amiable bounce. The audience softly sings along. (common and accepted.) This is followed by the equally well known “On the Sunny Side of The Street” with dancey accompaniment.

Granat recently heard a Sinatra recording of the song in which the lyric was changed to “…snatch your hat.” He asked Lahm in the latter’s capacity as trustee, whether that was entirely kosher. “I don’t think anyone who’s sane is going to prosecute Frank Sinatra for…it’s kind of a case by case basis,” came the practical response.

“It was good fortune for my mother to hook up with Jimmy McHugh,” Lahm comments, “He had a great feeling for jazz that explains why so many artists recorded those songs.” We hear a 1930s arrangement of “Exactly Like You” in which Granat grabs the air emphasizing “exactly;” “Don’t Blame Me” (for falling in love with you…) in sincere croon mode, his shoulders rising with octaves; “I Feel a Song Coming On” sung with the exhilaration of riding a bike with no hands; and a cottony “I’m in The Mood For Love,” which went to number one on the charts.

Insider anecdotes include Fields first collaboration with Jerome Kern “who was like a god to song writers coming of age in the 20s and 30s.” The song was “Lovely To Look At” for which Pandro S. Berman needed a 16 bar lyric to justify the $8000 gown Irene Dunne wore in Roberta. Fields’ assignment was completed overnight. Lahm tells us speed was a signature. His mother was an early bird, sitting with coffee, a yellow legal pad and Eberhard Faber pencils.

And are you aware that Fields originated the idea for Annie Get Your Gun inspired by the story of a WWII soldier who walked into a Stagedoor Canteen covered with sharpshooter medals from Coney Island? (When Kern died, Irving Berlin took over music and lyrics. Fields wrote the book with her brother Herbert Fields.) A number of songs from Astaire/Rogers films delight. Sheldon Harnick is quoted “…for me, one of Dorothy Fields’ special gifts was her magical ability to mix sophisticated ideas with prosaic images…How I envy the lines …We should be like/A couple of hot tomatoes/But you’re as cold as yesterday’s mashed po-tah-toes (potatoes)…” Granat performs “A Fine Romance” with the “audience” singing softly beneath.

Our host’s interpretation of “Someday” arrives gauzily romantic. The woman beside me audibly sighs. Lahm’s solo renditions of “Make the Man Love Me”: (A Tree Grows in Brooklyn) and “Close As Pages In a Book” (Up in Central Park) feature some of the most tender musicianship I’ve ever heard. Fields was as skilled with sentiment as she could be wry and nimble. “Remind Me” …not to find you so attractive…emerges an appealing ballad, without familiar bounce. Granat is wistful, Lahm almost strokes the piano keys.

For almost ten years after immense success as a lyricist, Fields wrote only librettos. Lahm has no idea why. He regales us with the difficulties of acting as trustee, keeping the integrity of the work when companies insist on rewriting lyrics or interpretations like Annie Oakley wearing a Mickey Mouse t-shirt. The usually reticent musician is warm and droll.

We close today’s festivities with a jaunty “It’s Not Where You Start, It’s Where You Finish” from Seesaw, one of Fields later life collaborations with Cy Coleman. The room collectively empties grinning.

*All Photos of Dorothy Fields Courtesy of The Estate