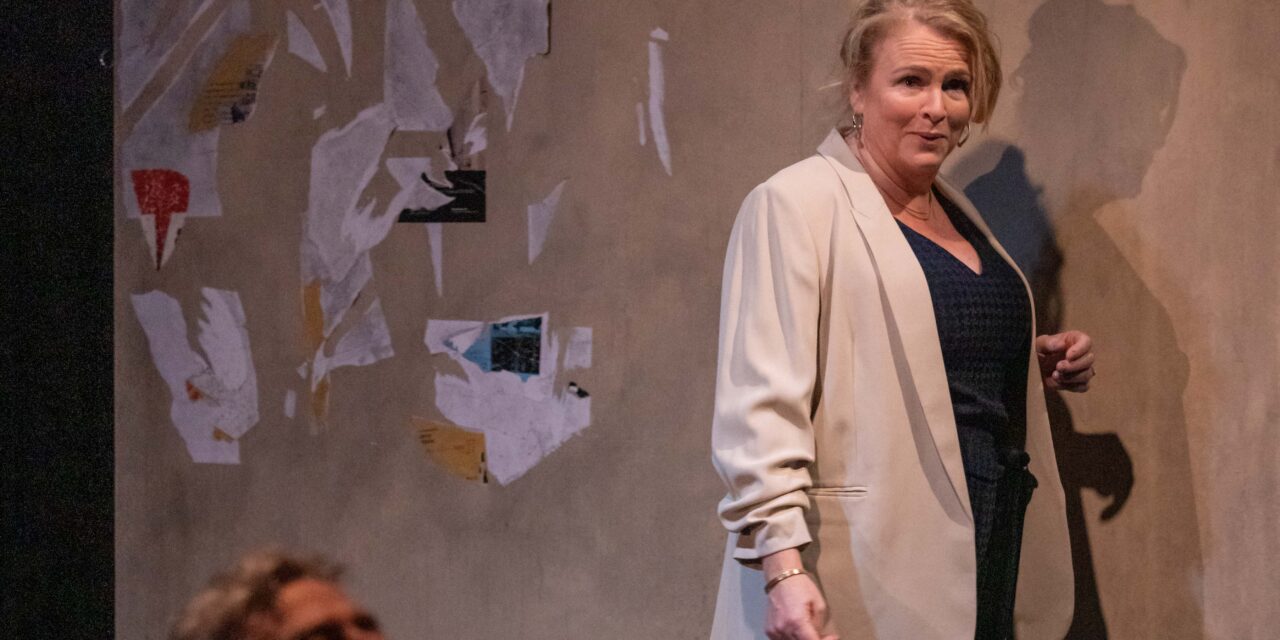 The small town Irish wedding is packed with characters. There’s Declan, the best man who goes by Hobbit because of his huge feet and who gives a “toe-curlingly awful” toast; Big Joan, who’s looking to have a good time with, well, with someone, Millennial Minnie, who won’t shut up about her blog and other youthful endeavors, Henny, a cousin of the groom who starts a brawl while everyone’s line dancing to “New York, New York,” and his flirty wife, Steph, who likes her coke a bit too much.

If “Heaven” were a movie, the wedding scene would be a boisterous one, filled with character actors and extras bringing it all to life. But in Eugene O’Brien’s equally funny and poignant two-hander, we learn about these goings on from the alternating monologues told by Mairead (Janet Moran) and Mal (Andrew Bennett).

Mairead, a social worker and sister of the bride, is vibrant and assertive but acknowledges that her forthrightness—and her drinking—can make her a bit much to bear. (Just ask her 19-year-old daughter, Siobhan, with whom she has an eternally tempestuous relationship.) Mal, a teacher, is a sweet soul but he’s often tentative, operating at a bit of a remove—some of that is the change in lifestyle since he had a stent put in a while back, but mostly his disconnect is caused by the fact that he has lived his life in the closet, desperately pushing down on his homosexual urges. He has done it so well that his wife, Mairead, doesn’t suspect.

Mairead may not know the truth about Mal, but she does feel like their marriage has been dead for years, reduced to a platonic, somewhat distant friendship. In the opening scene of “Heaven,” she reconnects with Breffni, an old flame for whom the embers still burn. As the weekend progresses, both Mairead and Mal take hesitant, and occasionally reckless, steps toward new futures, toward unleashing their truest selves.

We only hear about all these events second-hand, of course, since we never actually meet Breffni, nor the man who looks like Jesus for whom Mal is suddenly willing to confess his inner feelings. Dueling soliloquies can sometimes leave a play feeling incomplete but in this case, having the couple bare their souls to the audience makes perfect sense since they are utterly incapable of speaking honestly to each other.

Still, it could all fall flat if not for O’Brien’s sensitive and detailed writing— Mairead’s depressing description of the few shops in this nowheresville town in the opening moments feels like a twist on “Our Town”– and the agile and fully committed performances by the actors.

Moran’s Mairead can be prickly but she does love her Mal and is deeply saddened by how far apart they’ve become. During the wedding she says, “I turn to Mal and smile. He touches my arm the way he does. Like he’s not sure how to. Like he’s going in for to take hold of me arm but then chickens out or feels awkward and then just kinda brushes off it.” It would have been easy to infuse Mairead with bitterness but Moran is instead mournful and helpless—emotions that vanish once she starts downing drinks and kissing Breffni.

Bennett is excellent as the repressed Mal who is desperate to live his truth,  but he truly shines once he breaks all his own rules—he snorts a few lines in Steph’s car, starts drinking heavily and then suddenly he’s unstoppable. “The atmosphere in the room now, like they are all here in my show,” he says, speaking with the frantic and delusional confidence of the recently coked up. “This is Mal’s night. It’s like it’s all leading towards something.”

And the night is leading toward something, toward a moment of reckoning for Mairead and one for Mal as well. O’Brien’s writing avoids most predictable tropes and will leave Mairead, Mal and the audience with plenty of feelings to sort through. It is, to be sure, a wedding night to remember.

“Heaven” is presented by 59E59 Theaters and Fishamble: The New Play Company at 59E59 Theaters (59 East 59th Street) through January 29th. Running time is 90 minutes with no intermission.