Hedda Gabler and The Winter’s Tale – Bedlam in Rep 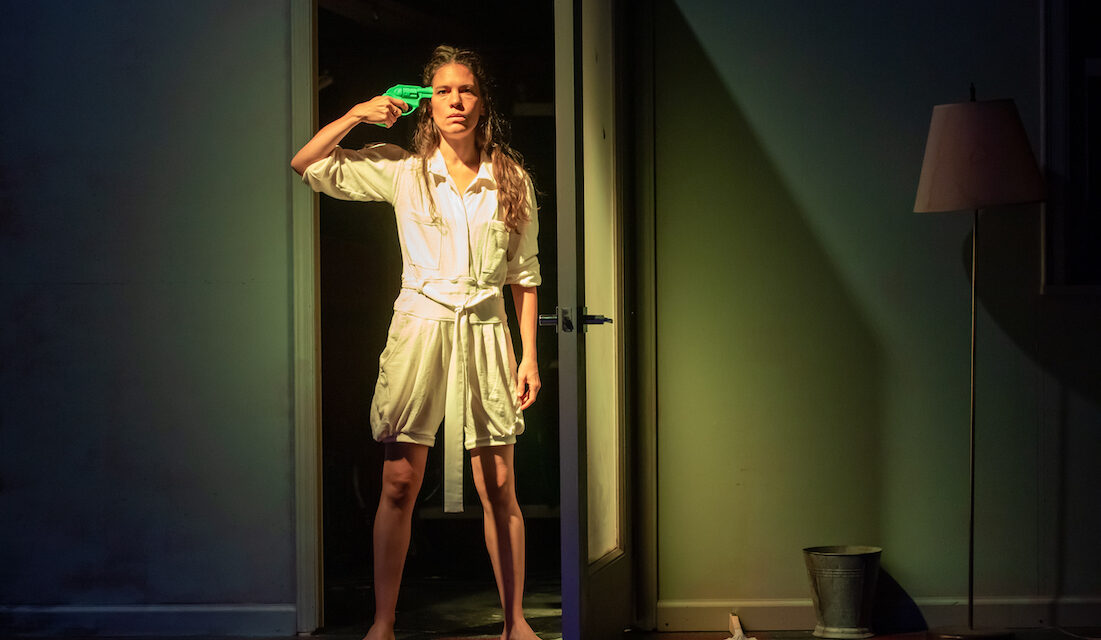 Bedlam, one of New York’s most creative and innovative theater companies, has been at it for ten years now. Bursting out of the gate that first year (2012) with outstanding, hyper-minimalist versions of Hamlet and Shaw’s Saint Joan, each played by a mere four actors, in repertory, Bedlam became the darlings of the downtown theater scene, with the late, great Terry Teachout of the Wall Street Journal declaring their Saint Joan the best revival of that play he’d seen “bar none.” Now, a decade later, artistic director Eric Tucker’s usually marvelous company—minus three-fourths of that original cast, including its co-founder, the extraordinarily talented Andrus Nichols—is once again presenting in repertory two seemingly mismatched plays in its inimitable, scaled-down style: Shakespeare’s The Winter’s Tale and Ibsen’s Hedda Gabler (through November 20 at the Irondale Center in Brooklyn). The intervening years, however, have somewhat dulled Bedlam’s sparkle, despite a strenuous reach for freshness and zazz for which they are so beloved.

While the two productions have a similar tone, Hedda Gabler is far superior, and rather palatable, thanks largely to the magnificent Susannah Millonzi who has proved herself time and time again the jewel of the Bedlam troupe. In this timeless 1891 Henrik Ibsen play about an emotionally tormented daughter of a renowned general who has trapped herself in an undesirable marriage with a man she loathes, Millonzi’s Gabler is awash in a lassitude that thinly veils her rage toward the world at large. We meet Hedda draped in a chair (doubling for a bed upstairs), practically melting around it. She moves with a dancer’s grace, remarkable for a character in the throes of depression, yet she somehow palpably conveys all of the emotions . . . forcefully. Gabler’s husband, the academic pollyanna George Tesman (amusingly played by Eric Tucker, who also directs) is desperate to engage her and keep her happy, though he remains blissfully naive that he made a monstrous mistake in marrying the most desired woman in town.

When Hedda’s former lover, and recently recovered alcoholic, Eilert Løvborg (an intriguing Elan Zafir), turns up, along with news of his literary success, making him an apparent rival to a professorship for which Tesman is vying, Hedda quietly sets about to destroy him—worst of all, by using his addiction against him. It’s an ugly, disturbing tragedy, the kind of which turn-of-the-century realist playwrights like August Strindberg, are famous for.

While both plays are naturalistic, stripped-down efforts, Hedda Gabler seems best suited for the remarkably, and sometimes inconveniently, wide Irondale Center stage (presumably a former middle school gym), largely due to Millonzi’s expressionistic and abstract choreography, which has Gabler moving about the stage in ways that seem inconsistent with the scene, but which reveal her inner torment. John McDermott’s set is effective enough, considering that most settings are mimed and unencumbered, for the most part, by literal furnishings. Daniele Tyler Mathew’s costume work leaves a little more to be desired, consisting largely of a Williamsburg hipster style, circa 2007, complete with man-buns and superbeards.

Bedlam’s other offering, Shakespeare’s The Winter’s Tale, does not fare so well. If you’re not already intimately familiar with the play, you will be lost from the very first scene and will likely not recover from your confusion . . . or boredom. Director Tucker has basically staged the play as a Bro Fest, which technically isn’t terribly far off the mark, considering the leads. The two kings, of Sicilia (played by Tucker) and Bohemia (Elan Zafir, possibly miscast), were raised together and are entitled and rich, so, sure, the conceit works. They party, drinking shots (of tequila? whiskey?) out of red Solo cups and engage in a macho competition in which they trade forceful slaps . . . with tortillas. Okay, that last part is hilarious, but that’s the only instance I found engaging about their otherwise boorish frat-boy behavior. For the most part, these characters are simply not interesting.

The ensuing conflict spurred by Leontes, King of Sicilia—becoming irrationally jealous and accusing his chaste and very pregnant wife, Hermione (a very effective Lisa Birnbaum) of having an affair with his best friend, the Bohemian King, Polixenes (and believing Polixenes had fathered both his son and their forthcoming daughter)—is a recipe for tragedy. He ultimately banishes the newborn, jails his wife, and suffers the loss of his son who dies from the stress of the situation. But the oracle that comes from Delphi to pass judgment on his accusations exonerates his wife, who “dies” (or appears to) in prison, sending Leontes into a paroxysm of grief. The first half of the play ends with the infant daughter being spirited away to a faraway land where she is adopted by a kindly shepherd and his idiot son.

The Winter’s Tale‘s most famous moment is Shakespeare’s delightful and unusually specific stage direction, “Exit, pursued by a bear.” This conveniently sets up the second half of the play, as the pursued is none other than the courtier who has taken the infant princess, now called “Perdita” (clever, eh?) into hiding. HIs evident demise at the hands of the bear sets up the ensuing mystery behind Perdita’s identity. But in this production the stage direction should merely have been, disappointingly, “opens the door to find a bear standing there.” A shame, really, because the bear costume was quite good.

Personally, I don’t count The Winter’s Tale among Shakespeare’s great plays; in fact, most companies long ignored it, or performed it rarely.  But in the last twenty or so years, his late-career, Jacobean Romantic plays (like The Tempest and, shockingly, the tepid Pericles, only half of which was written by the Bard), have become popular among younger theater companies. The Winter’s Tale, despite its problems as a play, has proven particularly popular.

One could argue that the reason the play had been ignored for so long is that after a woefully tragic first act, the play becomes, after intermission and a 17-year time gap, a goofy, disjointed romantic comedy. New characters are introduced, most gratingly a con man/thief named Autolycus. This character would have been portrayed as a clever, Elizabethan clown in Shakespeare’s earlier works, with the help of a skilled comic actor. In this production Shaun Taylor-Corbett, utterly lacks those tools. Worse yet, Tucker has allowed his scenes to be peppered with improvisation and crowd work, and the result feels like a dreary night at a second-rate, downtown improv show. Corbett’s crowd-work was both unwanted and cringe-worthy and further added to the confusion his alter ego “DJ Ped” (what??!!!) had already caused. Attempting to infuse Shakespeare with hip-hop stylings (not to mention anachronisms like “Did someone call for an Uber driver?” ugh) can only result in the embarrassment that most in the audience seemed to feel.

This production also suffers from not being able to sustain what worked so well in Bedlam’s early Hamlet production (and their two astonishing Twelfth Nights, which ran in repertory with one another in 2015): actors taking on multiple roles in one scene. The Winter’s Tale’s storyline is too complex and the dialog too convoluted to follow the actor, despite a noble effort. It simply doesn’t work here.

All these distractions lead to a bigger problem: thematically, Hedda Gabler and The Winter’s Tale are linked by strong female protagonists who are wronged and/or betrayed by the world around them and a society that sees them as second-class citizens. They are powerful, intelligent women who would fare perfectly well on their own and should never have been subjected to the rigors and whims of a patriarchal society and/or very bad men. This is the real tragedy linking these two plays. Sadly, the message washes away, mostly in the second half of The Winter’s Tale because it ceases to make sense. It’s a shame, really, because the statement would have been thunderous were it well-delivered.

The Winter’s Tale and Hedda Gabler. Through November 20 in repertory at the Irondale Center (85 South Oxford Street at Lafayette, Downtown Brooklyn). www.bedlam.org