Herb Alpert and Lani Hall – Cool as Cool Can Be 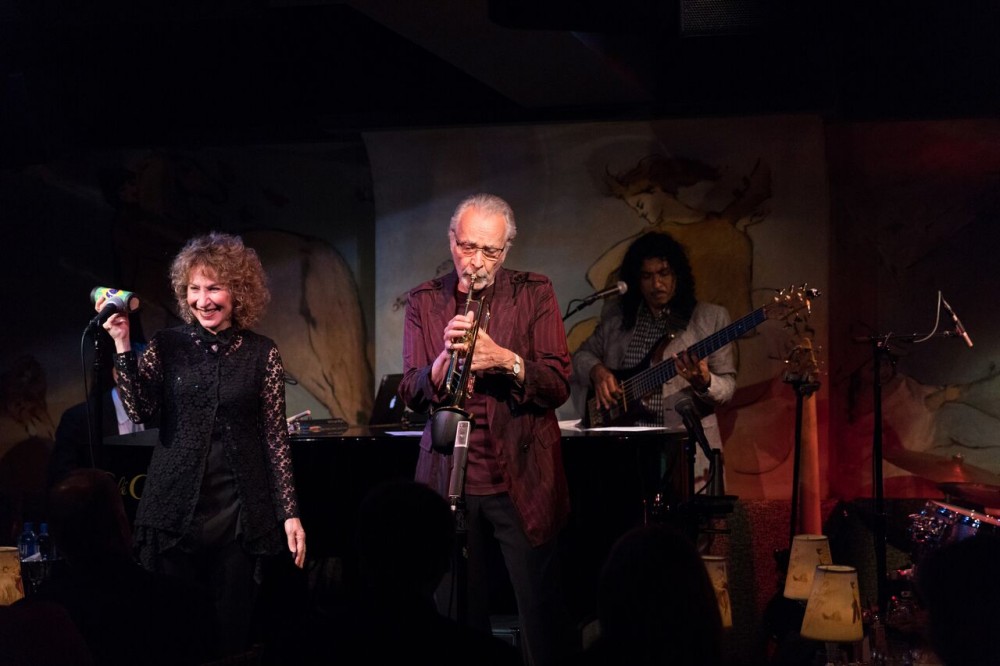 As the unexpected swinging addition to their exciting show at the Café Carlyle reminds us . . . “get your coat and get your hat, leave your worries on the doorstep – just direct your feet to the sunny side of the street . . .” or, in this case, to the luxurious Café Carlyle where the 43 years married couple, Herb Alpert and Lani Hall, are back for a fifth go-round. They’re relaxed (and so are we) feeling right at home, delivering up one hit after another in their unique style, with fresh arrangements and clever little segues.

This is the man who founded (with partner Jerry Moss) A & M Records in 1962, the largest independent record company in the world. Alpert, at 82, is hotter than ever on that sweet sounding trumpet backed by a frisky Bill Cantos on piano and vocals, along with Hussain Jiffry on electric bass and Michael Shapiro on drums (who also provide backup vocals). It’s a jazz and Latin lover’s delight as they conjure up the music from Tijuana Brass and Brasil ’66, along with new incarnations of the great American songbook specialties including “Michelle” (George Martin, John Lennon, Paul McCartney) and from their latest Volume I album “C’est Si Bon” (Henri Betti, Andre Hornez). Expect to hear your favorites – “Ob La Di Ob La Da,” “A Banda,” “ The Lonely Bull,” “Spanish Flea,” “Fool On the Hill,” “A Taste of Honey,” “Morning Sun” along with Jobim specials “Girl From Ipanema,” “One Note Samba,” and so many more that bring back loads of soul-fulfilling memories.

Lani Hall, discovered by Sergio Mendes, became his lead singer for Brasil ’66, and that’s how these two lovebirds met. She’s a really cool jazz singer who performs in Spanish and Portugese and very well known for her James Bond theme song “Never Say Never Again” (1983). Additions to the show included a multi-tempo “Besame Mucho” with Lani singing in Spanish, and major hit/audience pleaser (all invited to sing) “This Guy’s In Love With You” – – big highlight. “I’ve Got You Under My Skin” (Lani Hall) led into a burlesque rhythmic styling of “La Vie En Rose” allowing Bill Cantos full throttle ahead on piano and vocals that received audience raves.

Herb and Lani are well known for their philanthropic work. They are non-stop, performing concerts worldwide. So nice to have them here in New York thru September 16. As the song goes “just leave your worries on the doorstep. . .” and make your way to the Café Carlyle.