Here’s Love to the Music Man 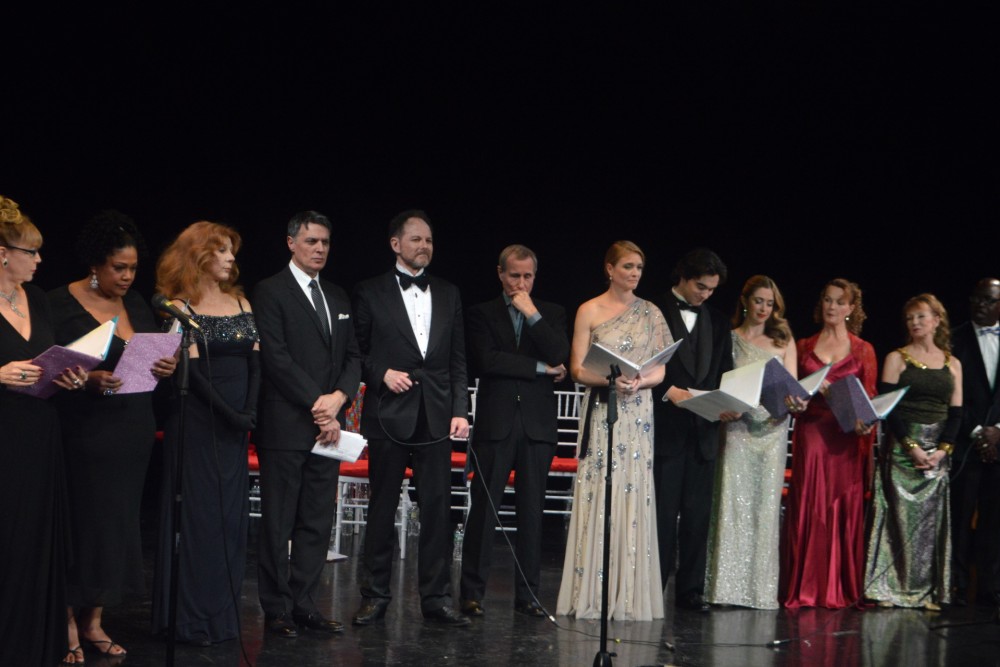 The ninth season of The Ziegfeld Society got off to a boffo start with a celebration of Meredith Willson and his best-known work, The Music Man. To celebrate the man (Google him to learn about one heck of a fascinating career) and the musical (it won the 1957 Tony Award for Best Musical, beating out West Side Story), all stops were pulled out for an ambitious production in a new space. The large stage of The Jacqueline Kennedy Onassis Theater (in the former High School for the Performing Arts) enabled Host, Writer and Director Walter Willison, and Mark York, Musical Director-pianist, to ambitiously stage an extravaganza of homage in Here’s Love to the Music Man and including Tony Award winner Jim Dale. It wasn’t quite 76 trombones, but three, which led the parade: The City Sliders, Steve Bleifuss, Nate Sutton and the alliteratively named Gina Trombetta. The parade that followed encompassed 22 numbers, most of then from The Music Man, but also a few others of Willson’s work, such as “Are You Sure?” from The Unsinkable Molly Brown, sung by Cynthia Thomas. A special treat was delivered in the form of “Carole and Paula” (Carole Demas and Paula Janis) reprising their roles from the legendary children’s TV show (it has a cult following) The Magic Garden. The duo sang Willson’s 1941 lullaby, “I See the Moon,” a tune perfectly matched to their Garden personas. The charming and talented twins, Matthew and John Drinkwater (directed by Tony winner Michele Pawk), lit up the stage with harmonicas and beautiful baritones with “My State, My Kansas, My Home” from Willson’s first Broadway musical, Here’s Love. No Willson tribute would be complete without a Barbershop Quartet (an art form Willson himself was involved in). The Gotham Four – Anderson Daniel, Rafi Hasib, BJ Hillinck and Richard Townsend – excelled at close harmony with cast members , in a vibrant “Pick-a-Little, Talk-a-Little/Good Night Ladies” from The Music Man. Among Willson’s treasure chest of music is a gem not heard since 1964, when it closed out the Texaco Star Parade TV Special tribute to the slain John F. Kennedy. “Ask Not” was led reverently by Aaron Lee Battle with cast members offering supporting vocals.Another highlight of the show was the heartfelt reading by Joanna Rush of a beautiful letter sent by the townspeople of Mason City, Iowa, written by the Executive Director of the Meredith Willson Foundation (Mason City was Willson’s home town and model for The Music Man‘s River City). Here’s Love to the Music Man was rich in solo performances. Willison, whose professional debut as a teenager was in the West Coast premiere of Here’s Love, offered anecdotes and remembrances, plus “Here’s Love” and “That Man Over There” from the musical. Willison also beautifully sang one of Willson’s biggest hits, “You and I,” which was used as the theme song for radio’s Maxwell House Coffee Hour. An amusing moment came when Willison went up on lyrics to “The Sadder But Wiser Girl.” Pro that he is, he made the moment into shtick so convincing that the gaff seemed intentional. Shana Farr was on hand to sing the original, unedited version of The Music Man’s “My White Knight.” Farr was in prime voice, as was Broadway leading man, Robert Cuccioli, who crooned another of Willson’s biggest and most covered hits (even recorded by the Beatles), “Till There Was You.” The finale was a grand one, with Jim Dale –who played The Music Man’s Harold Hill – amusing with anecdote and stirring with his interpretation of “Trouble,” imbued with the false sincerity of a snake oil salesman. The entire cast reprised “76 Trombones,” followed by a number Willson closed various of his own presentatons with, “May the Good Lord Bless You and Keep You.”