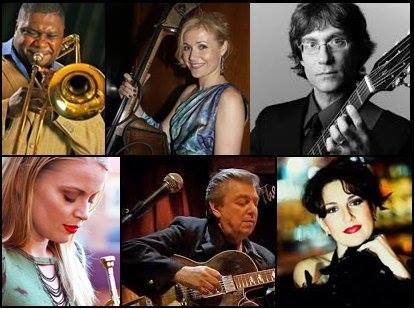 Producer Jack Kleinsinger may well have subtitled this edition of Highlights in Jazz (now in its 44 year) “Jazz Musicians Who Sing.” While not a rare phenomenon, it’s also not common, so to have Wycliffe Gordon (trombone), Bria Skonberg (trumpet), Nicki Parrott (double bass) and Alexis Cole (piano) singing and performing together was a treat indeed.

Gordon dominated the first half of the concert, opening with a slow and easy-tempoed “It Don’t Mean a Thing (If It Ain’t Got That Swing),” beginning with masterful mute work, and joyfully invoking the audience to join in on the “do-wahs.” With a slightly gravelly voice – a kind of Louis Armstrong light – Gordon followed with an uptempo “Honeysuckle Rose,” and with Skonberg, whose voice has a clear smoky timbre, sang “I Can’t Give You Anything But Love.” Nicki Parrott, one of the most soulful and compellingly animated bassists in jazz, and possessor of one smooth soprano voice, took center stage to sing (in both Spanish and English) “Quizás, Quizás, Quizás.” An emotional moment in the evening came with “Creole Love Call,” an instrumental dedicated to the great baritone saxophone player, Joe Temperley, The much-loved Temperley had passed away the day before. He was a player with a particular association to Duke Ellington; this was a number he not only loved to play but which he’d recorded with Gordon. The closer for the set came with all singing a medley of “When the Saints Go Marching In/(I’ll Be Glad When You’re Dead) You Rascal You.” Drummer for the set was Kenny Hassler, a dervish of percussion – a musician of tremendous energy who puts his whole body into his work. Virtuoso Chris Pattishall accompanied on piano, taking solo turns during most of the numbers of the evening, but shining especially bright on the instrumental number of the set, “After You’ve Gone.”

Part two of the evening featured Alexis Cole, who continues to show growth in her singing and performing. With a very controlled and modulated – and pleasing – alto, Cole is becoming less studied and more relaxed on stage. She followed two instrumentals (“Body and Soul” and “There Will Never Be Another You”) by ace guitarists Frank Vignola and Jack Wilkins (who remained onstage). Cole’s first song was a bouncy “(The End of) A Beautiful Friendship.” With Vignola’s lone accompaniment, Cole sang a beautifully evocative “Stardust;” and with both guitarists, Skonberg, Gordon and Hassler, she easily scatted to “East of the Sun.” Cole added herself to the mix by claiming the piano for the languorous Brazilian song, “Estate,” which well-suited her voice. The highest point of the evening came with two duets with Parrott on a medley of “Blue Moon/Moonglow,” and an upbeat “On the Street Where You Live.” Parrott arranged both songs with imagination and a refreshing creativity; the counterpoint and blending of both voices was superlatively inspired. The entire company (with Cole on piano) sang and played out with a rousing “Bye Bye Blackbird.”