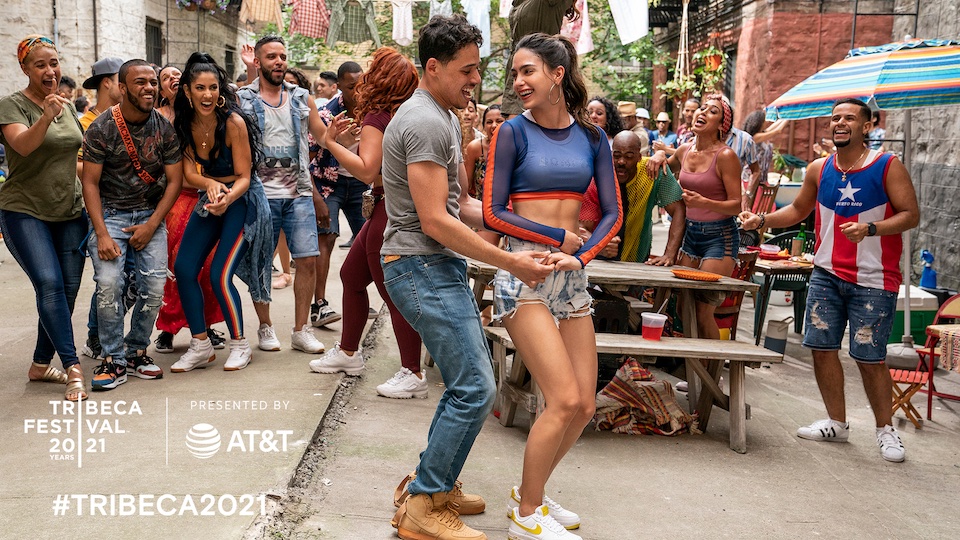 In its long-awaited adaptation to film, the award-winning musical In The Heights that premiered on Broadway in 2008, arrived to celebratory fanfare as the opening night film at Tribeca Film Festival.

It is a spectacular turn for Tribeca, now in its twentieth year. The film marks the reopening of New York City’s live events (with proper social distancing) after the nightmare of the pandemic. And it also represents the reimagining of the best of what only New York can offer in its brilliance, scope and breadth, impeccable entertainment with trenchant significance. The cast and filmmaking team, with passion and thoughtful insight, made a breathtaking love letter to Washington Heights and New York City.

In The Heights screened live in every New York borough on opening night. Currently, it is screening on HBO Max and in theaters throughout the city. I recommend seeing it on the big screen, so you can experience the sheer delight of the music, choreography and shifting, electrifying emotional vibes.

It is directed by Jon M. Chu; he has a maverick cinematic eye for colorful splendor. Quiara Alegria Hudes’ updated screenplay (she wrote the book and Lin Manuel Miranda wrote the music and lyrics of the Broadway show) vibrates with poignance and power. The story has been altered to include trending topics of vital importance that give the film a resonance for us today. Songs have been cut or repositioned. Lin Manuel Miranda wrote an additional song sung by Marc Antony (who is excellent in a cameo as Sonny’s father). There are other surprising and symbolic cameos (no spoiler alert here) and the abundant humor, uplift and characters of the stage version are deepened in the film.

Chu is all about telling Usnavi’s compelling story of his beloved Latinex community of Washington Heights and his decision to stay and not return home to the Dominican Republic. The charismatic, amazing Anthony Ramos is the likeable, mesmerizing Usnavi. We are enthralled as he relates his story in framed flashbacks of his “little dream,” his love interest Vanessa (the smashing Melissa Barrera) and the dreams of his close friends and lovebirds, Nina Rosario (the amazing Leslie Grace) and Benny (the uber talented and likeable Corey Hawkins).

Usnavi’s community and family circle are rounded out with the wild characters in the hair salon, one of whom Daniela (the superb Daphne Rubin-Vega) leads the charge. His cousin Sonny (the fine Gregory Diaz IV) provides an extra twist on the trials of undocumented dreamers, and Nina’s Dad, Kevin Rosario (the irrepressible Jimmy Smitts) whose character has been strengthened, faces economic hurdles, and is backed into a corner to help his daughter.

Olega Merediz, who originated the role of Abuela Claudia in the stage version, gives a stunning performance throughout. The blackout scene is revamped and her featured scene where she sings about her immigrant experience coming from Cuba is profound and mystical. Abuela’s song “Paciencia y Fe” is superbly reimagined with poignant, strikingly beautiful significance. Hudes has done a masterful job in making In the Heights an acute, heartfelt experience. She subtly throws down shibboleths which have arisen especially in the last five years about immigrants, dreamers and the working-class community’s ability to meld and succeed in the elite Ivy Leagues. I defy the most unemotional audience member not to be moved by “Ablanza” sung movingly by the company during the blackout or the song that affirms unity in diversity,  “Carnival del Barrio.”

Interestingly, Lin Manuel Miranda takes a back seat to the main action. However, his presence and joy are unmistakable throughout. And it is fun to see him being another version of himself, singing his character’s song on a day of mucho calor.

If you have been a fan of In The Heights, you will enjoy this adaptation and be gobsmacked at how the stage version has been evolved by Chu, Hudes, the creative team and the actors. If you have not seen the Broadway production, you will be revitalized. This film is memorable in the composition of its scenes, shots, dances, characters. It deserves to be appreciated on an artistic level and for how its humanity embraces all of us by reminding us about what is important: family, love, community, friendship, generosity.

Don’t miss In The Heights whose two + hours swiftly pass by. It is screening throughout New York City and on HBO Max.