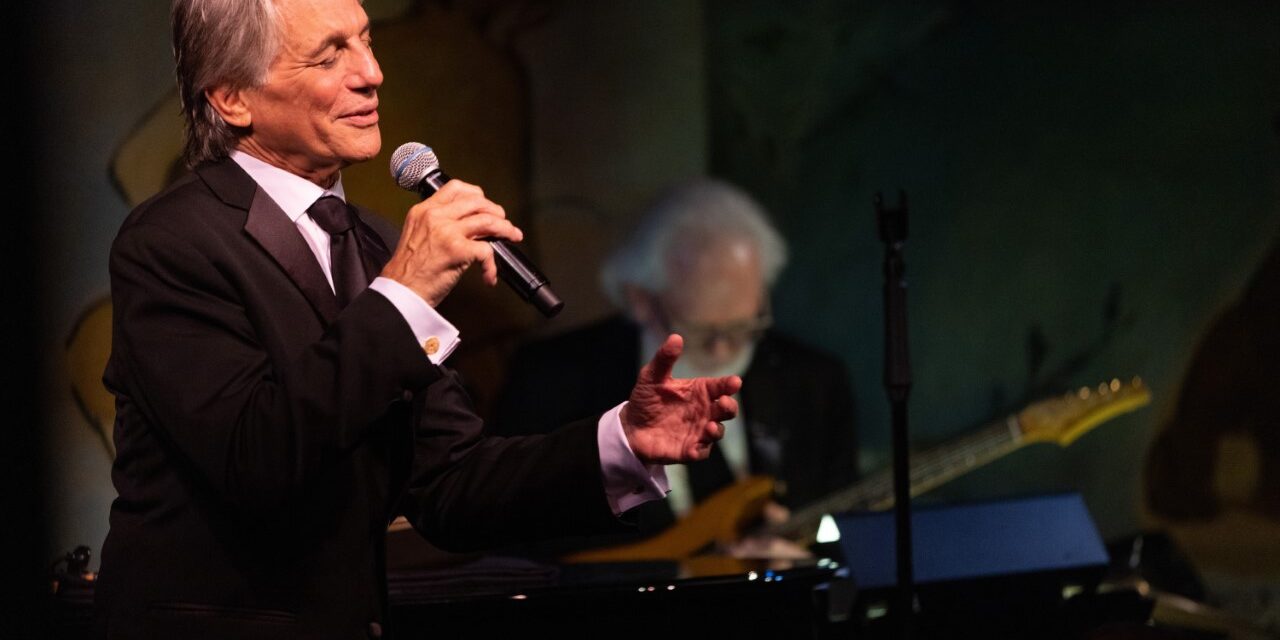 Back at one of his favorite haunts, Tony Danza has Standards and Stories that knock your socks off. He’s a man of multi-talents and regales his sold out crowd at Café Carlyle singing and swinging with many of the American Songbook tunes we love to sing. What a treat as we recall the Danza we know and love from television’s Taxi (1978-1983) and Who’s the Boss (1984-1992).

Tony Danza is a natural, with a very likeable persona. You’ll feel you’ve been personally invited to join him at home for a drink so he can tell you some stories, jokes and sing you some songs. This now gray haired sexy, raspy-voiced singer opened with an upbeat “As Long As I’m Singing” (Bobby Darin) showing off his scat abilities, segueing into “How Little We Know” (Phillip Springer and Carolyn Leigh). He intersperses singing with jokes and family history which makes him a warm and fuzzy human being you’d be happy to call ‘friend.’

I do believe he has more fun telling stories and, at times, it sounds as if he’s making it all up at the moment. This kid from Brooklyn came to the Carlyle many years back and now he lives across the street (makes life a lot easier if you’re having a run from June 14 thru 25)!

He’s got rooster and horse jokes and stories about Mom who was a typical Sinatra Bobby Soxer and from whom he learned to love ole Blue eyes stylings and songs. She only wished she could meet Frank Sinatra in person – which Danza made a reality for her once he became a TV star working on Who’s The Boss. He loves walking around NYC, loves the Yankees and to quote John Updike “people who don’t live in NY are just kidding.” We’re introduced to the Danza clan, his two sons and daughter, and grandkids, his divorce as he punctuates with . . . “I’m single and it’s nice.” Having a reduced fare metrocard also seems to please him as he waxes poetically about the three stages of life: “Youth, Middle Age and You Look Good!”

Returning to music, his soft and meaningful interpretation of Ervin Drake’s “It Was A Very Good Year,” accompanied only by Dave Shoop on guitar, produced a tapestry of emotions. Songs covered the gamut for a boy who grew up in a household with no musical instruments, including a Latin beat for Michel LeGrand’s “Watch What Happens.”

More stories unfold as he talks about Hollywood days and parties at Sammy Cahn’s house where every known star had been invited, i.e., Dean Martin, Angie Dickinson, Billy Wilder segueing into Sammy Cahn/Saul Chaplin’s “Please Be Kind,” “Until The Real Thing Comes Along” and “Second Time Around” (Sammy Cahn/Jimmy Van Heusen), all sung with an easy flair.

In 2015 he made a splash on Broadway in Jason Robert Brown’s Honeymoon in Vegas, a musical comedy that began at Paper Mill Playhouse (2013) as he revived some of the show’s songs including the funny, irreverent list song “I Love Betsy.” And then it was time to show off his other talents, like tap dancing and uke playing, on which he’s learned to play all sorts of tempos from American Songbook tunes (“Guess I’ll Hang My Tears Out to Dry”), to rock n’ roll (“Love Potion #9”) and Artie Butler’s tearful nostalgic “Don’t Remember Ever Growing Older.”

Ending the evening on an upbeat “If My Friends Could See Me Now” (Cy Coleman/Dorothy Fields) with some fancy tap dance steps, Danza remained on stage saying “sit, sit, I’ll do another song, no fake walk off” . . . offering up the little heard and sad Frank Sinatra tune “Drinking Again” (Doris Tauber/Johnny Mercer).

What a night, what a charmer! Tony Danza, an ultimate triple (no quadruple) treat entertainer, can be seen at the Café Carlyle, 35 East 76 St. @ Madison Ave. NYC (A Rosewood Hotel) thru June 25. Tickets: https://www.exploretock.com/cafecarlyle