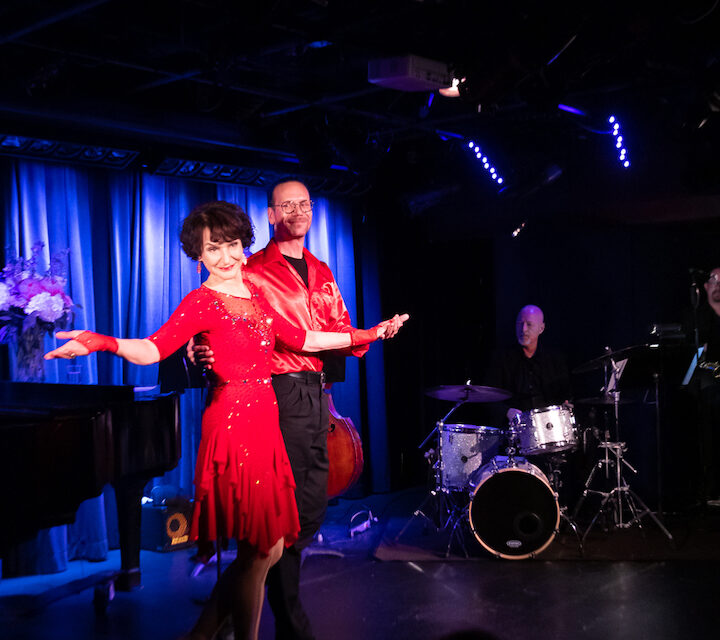 For anyone wanting a shot of “feel-good,” the place to go is anywhere Jackie Draper is performing. Her show Spreadin’ Rhythm Around, at the newly reopened Laurie Beechman Theatre, was total immersion in happy-making. And yes, there was a whole lot of rhythm in an eclectic set list that swung, swayed and bobbed along with Draper’s verve and contagious joy. She’s a delightful performer shot straight and true through with sincerity and authenticity.

Looking stunning in a bright red bespoke party frock, Draper instantly charmed with “If I Had Rhythm in My Nurs’ry Rhymes” (Jimmie Lunceford, Saul I. Chaplin, Sammy Cahn, Don Ray), followed by another jazz tune, the eponymous “Spreadin’ Rhythm Around” (Jimmy McHugh, Ted Koehler). The focus of the show was solidly on the music, with narrative just right—a backstory here, a little fact there—all connected by Draper’s sheer delight of being on stage and delivering her music. She handles genres well, versatility applied to jazz, chanson, ballads and songbook standards. The program also delightfully showcased several little-known or little-sung numbers, such as Cole Porter’s “Where Have You Been,” “Such Sweet Sorrow” (Michel Legrand, Marshall Barer) and “Sure Thing” (Jerome Kern, Ira Gershwin).

Draper isn’t afraid to venture into challenging territory either. Duke Ellington (from a riff by Harry Carney) wrote “Rockin’ in Rhythm” in 1931 as a super-charged band piece. When the great Ella Fitzgerald recorded the Ellington Songbook she scatted to the number. But jazz singer Lorraine Feather added a vocalese lyric several years ago, which Draper sang. The tempo was slowed down to accommodate her, but she comported herself well, and demonstrated she knows her way around phrasing a tune even with a harmonically tricky number such as this one. In another mashup, of Frédéric Chopin’s “Minute Waltz” with lyric added by Don Harper, Draper trilled through the drill like a Gilbert and Sullivan diva, offering solid soprano interpretation with a goodly dash of humor.

Draper also happens to be skilled at languages and her French on “Reste” (Charles Aznavour) was beautifully rendered, as was her Portuguese on “Triste” (Antonio Carlos Jobim) also sung in English in a duet with music director and pianist, Gregory Toroian. Toroian also contributed vocally to a dance number, Sam Gaillard’s “Tip Light,” with Draper and guest artist Milo Saidl tapping to Eddie Brown’s choreography.

Closing out a set of musical riches was a delightful rhythm medley of “I Got Rhythm” (George and Ira Gershwin), “Crazy Rhythm” (Joseph Meyer, Roger Wolfe Kahn, Irving Caesar) and “Fascinating Rhythm” (George and Ira Gershwin). Another rhythm song was Draper’s commentary on what we all endured during the pandemic lockdown and the jubilation of being back together again as performer and audience: Barry Manilow’s “New York City Rhythm.”

In addition to Toroian, the fine musicians supporting Draper were Tom Hubbard on bass, Ron Tierno on percussion and Robbyn Tongue on woodwinds. Spreadin’ Rhythm Around was smartly directed by Kimberly Vaughn.