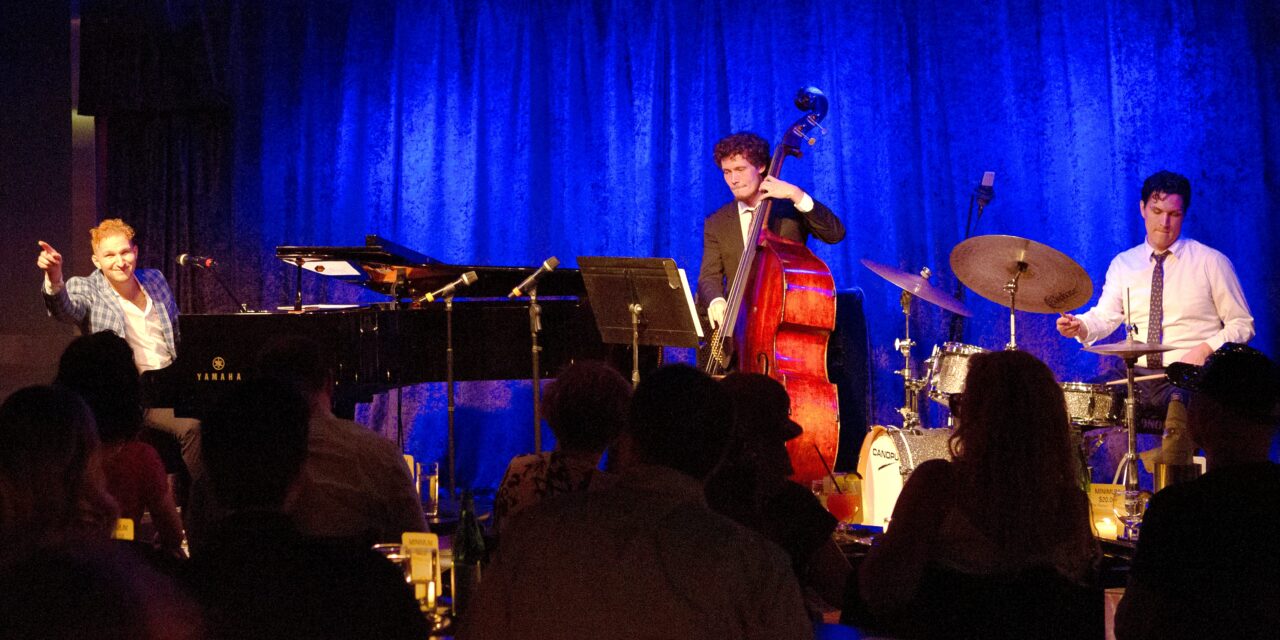 Jacob Khalil and his trio returned to Birdland Theater on August 14th for two sets.  After a strong showing in The Lineup with Susie Mosher earlier that week, it was clear he has talent.  Jacob describes himself as a Palestinian-American songwriter, pianist, and singer, but the singular word that comes to mind is “entertainer,” albeit his musical identity is not quite fully formed.  As such, we saw multiple iterations of Jacob, including jazz pianist, piano bar accompanist, and pop singer-songwriter.

Sporting a blue-checkered jacket over black pants, with a shock of curly hair, Jacob gave off a lounge singer vibe, but his skill set is far greater.  Seated at the piano, he sang a jazz waltz of “What a Difference a Day Makes” to start the set.  He saved the best of his voice for the back end of the song.  By the second number, it was clear the drummer was overpowering him.  It took an audience member to ask for more vocal volume.

Mr. Khalil took an interesting approach breaking the set up into his three “obsessions“ – – Singalong, Songwriting; and Harmony.  In the “Singalong” section, on Dua Lipa’s “Levitating,” he had the audience sing the “Yeah-yeahs” with him.  On another tune, he seemingly got lost somewhere in the piano solo, but he made up for this with a fun, audience call-and-response scat.  He sang much of Brian Wilson’s multi-part harmony masterpiece “God Only Knows” alone, but asked the audience to help with the musical mantra, “God only knows what I’d be without you.”  There were many singers present in the near-capacity house, and Jacob got his harmony.

His oddest piece here was the mash up of the lyrics and slightly modified melody of “Rocket Man” (Elton John/Bernie Taupin) sung over the chords to Stevie Wonder’s “Don’t You Worry ‘bout a Thing.” Though an interesting choice, it did not quite land.

Jacob discussed his songwriting process, which often involves leaving himself a voice memo of a song that pops into his head in the middle of the night.  He had good material here, including the premiere of “All for You,” which could easily be a John Legend pop hit.  Starting as a slow ballad, it progressed to a fast, rhythmic power ballad.  His next original, “Flame,” was even stronger.  A rhythmically complex ballad with intriguing progressions, he romantically sang it to his wife, Victoria Harding Khalil, who sat in the front row, and with whom Jacob sang a charming duet of Charlie Chaplin’s “Smile” at the very end of the show.

The “Harmony” section was the highlight of the evening.  Jacob had the band take five while the first of his musical guests, Angie Pastor sang luscious harmonies in center stage on Jacob’s original, “Gemini.” (Ms. Pastor, who also plays jazz guitar, killed at The Lineup two nights later with a sensational, self-accompanied “Skylark.”)  For this reviewer, gorgeous harmonies are like catnip, and these did not disappoint.  The poppy tune has clever lyrics and the de rigueur, unresolving chord structure of modern pop, here built around major seventh turnarounds.

Jacob told the audience he started as a jazz pianist, and saved a few jazz standards for the improvisation section.  The bossa nova hit “Girl from Ipanema” (Antonio Carlos Jobim/Norman Gimbel) had the trio trading fours.

Parts of the show seemed a bit “not ready for prime time.”  Two nights a week, Jacob is a popular pianist, singer and accompanist at Mimi’s Restaurant & Piano Bar on the east side an Italian restaurant out of “Piano Man.” The pianist will entertain the crowd, people might sing along, and some daring patrons take a turn at the mic.  At times, Jacob seemed to be doing his Mimi’s act.  An unfortunate moment came when he brought up a guest singer for a surprise solo.  He asked her, “All of Me in C, right?”  The key was wrong for her voice, and she had great difficulty finding the melody.  Once she did, it was way too high for her, though she gamely finished it rather than simply restarting in the correct key.  While this would be acceptable at Mimi’s, it was frankly surprising at a world-class club like Birdland.

Jacob Khalil is an entertaining, good-looking fellow who is appealing and heartfelt in his performance, especially when singing to his wife.  He has good instincts in reaching a crowd.  His singing is good, especially when he uses the most powerful upper part of his voice, which is at times reminiscent of John Legend and Peter Allen.  His piano playing is competent, but his jazz improvisational skills were the weakest part of his set.  If he wants to be more than a “Vegas guy,” he would be well served to find a stronger musical identity.  Still, he shows much promise, and his sold-out show in March garnered excellent reviews.  Notably, jazz/cabaret legend Marilyn Maye was in the audience.  While Ms. Maye said before the show that she had not heard him before, she invests her time wisely.  Her mere presence spoke volumes.

Photos by Rebecca Reed except where indicated