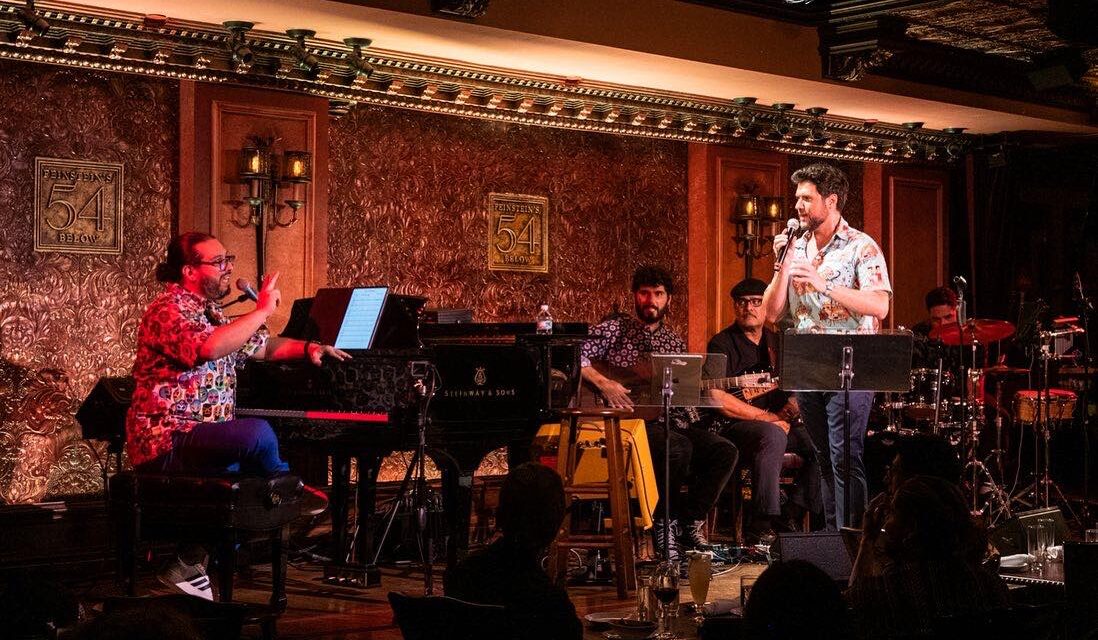 When two irresistible forces meet, the inevitable result is combustion.  At 54 Below on Monday night, combustion occurred when Mauricio Martínez, a star of Telemundo and Broadway (On Your Feet!) performed the songs of Jaime Lozano, who composed the music for the off-Broadway show Children of Salt and who released the album Songs from An Immigrant in 2020, among other credits.  Mr. Lozano accompanied on piano, along with a terrific trio.  Both born and raised in Monterrey, Mexico, Lozano recently orchestrated Lin-Manuel Miranda’s music for the movie version of In the Heights.  Mr. Martínez refers to his close friend Jaime as his brother, or hermano, though they are not related by blood.

When this reviewer first heard Mr. Martínez perform last year, at a benefit edition of Jamie deRoy and Friends at Birdland (reviewed here (https://www.theaterpizzazz.com/jamie-deroy-friends-benefit-for-the-actors-fund), he sang in Spanish, though his interpretive powers crossed language barriers.  While the opening, welcome announcement for the July 54 Below show was spoken in Spanish, the performance was nearly entirely in English, save for a few lyrics and a few lines of patter.

This was a very personal show for both men.  For Mr. Martínez, who lived with Mr. Lozano and his wife for some time in New York, and the brotherly love they share is palpable.  The two Monterrey, Mexico natives share many commonalities as immigrant musicians navigating the legal system even to legally perform in this country.  Interestingly, though they are from the same region in Mexico, Mr. Martínez, a trained actor as well as a singer, speaks perfect, accent-free English, while Mr. Lozano still maintains his strong Mexican accent.

Mr. Martínez took the stage dressed in a colorful, short-sleeved shirt with prints of Frida Kahlo paintings. This was no coincidence, for it was announced the same week that FRIDA, The Musical, with music by Lozano, is in development.

As Mr. Martínez noted, immigrant entertainers are often asked to change or “Americanize” their names, a practice that is gradually changing.  [This is, of course, not new, as, for example, Manuel Antonio Rodolfo Quinn Oaxaca (Anthony Quinn) or Margarita Carmen Cansino (Rita Hayworth) would have attested.] The star playfully taught the audience how to correctly say his name.  The opening number, “You Gotta Change Your Name” (lyrics by Noemi de la Puente) reflected this immigrant experience.  Mr. Martínez’s powerful tenor was thrilling from the outset, adding gravitas to his musical declaration, “I’ll never change my name!”

Special guest Shereen Pimentel, who co-starred with Mr. Martínez in Children of Salt, joined the star to sing a duet of “Morena, Cariño” (lyrics by Lauren Epsenhart).  Their beautiful voices blended perfectly.  Later in the show, they performed again on “DJ Can You Hear?” (lyrics by Nancy Cheser).

The opening track the Immigrant album, “The Generic Immigrant Welcome Song” (lyrics by Noemi de la Puente) was quite the tongue twister, and a fun song.  Mr. Martínez addressed his use of as music stand to refer to lyrics.  “Barbra Streisand uses teleprompters, and musicians read sheet music, so why can’t singers read lyrics?”  Mr. Lozano writes, “How I miss the taste of home” in “Mi Perú” (lyrics by Nancy Cheser) from his Present Perfect album.  In this lovely ballad, Mr. Martínez plaintively sings the rhetorical question, “New York, will you ever feel like home?”  Songs like these make real for the listener the many issues facing immigrants, especially here in New York.

You would never know it by looking at him, but the very handsome, healthy-looking Mr. Martínez is a four-time survivor of bladder cancer.  It is a heartbreaking story, for he had finally made it past the legal labyrinth of work visas to star on Broadway, but he had to leave the show and return home to Mexico.  He willingly shares these challenges, and asked for no pity.  Rather, he delivered a song written for him by Jaime Lozano and Marina Pires, “Nothing Is Broken.”  If this performance were a Broadway show, this might have been the “11 o’clock number.”  Both the lyrics and Mauricio’s singing moved many to tears.

After the show’s conclusion, rather than an encore, Mr. Lozano carried his smiling young son Alonzo (age 6) to the stage in a beautiful moment.  For the uninitiated in particular, the show was an excellent primer for the music of Jaime Lozano.  His songs fuse different genres of Latin-based music with musical theatre.  Mauricio Martínez is a powerful tenor with a dreamy voice, whose life experience, big heart and acting chops give him a unique ability to interpret a lyric.