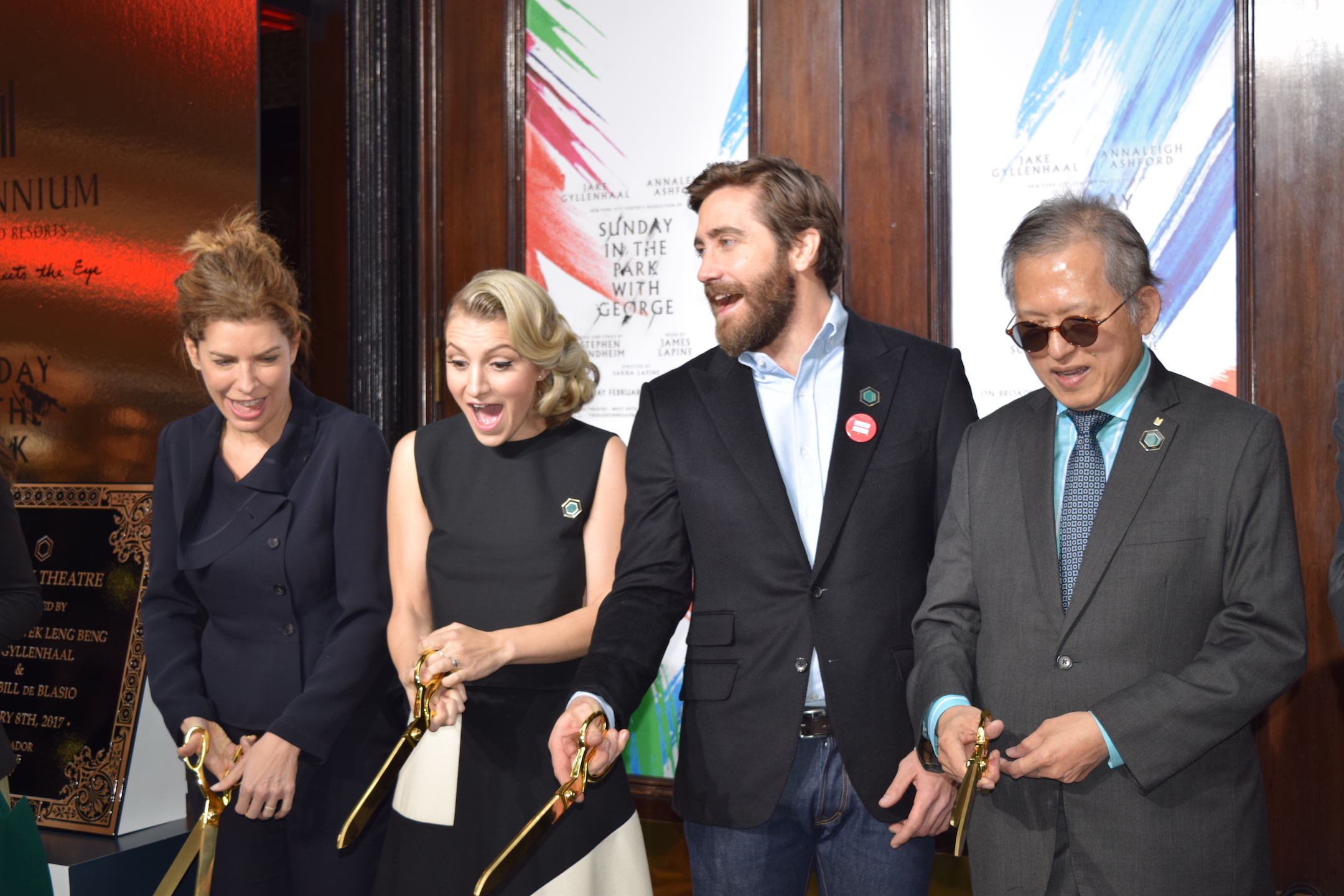 Sunday in the Park with George stars Jake Gyllenhaal and Annaleigh Ashford, and Millennium & Copthorne Hotels Chairlady Madam Cecilia Kok were front and center at the ribbon-cutting ceremony celebrating the grand re-opening of Broadway’s historic Hudson Theatre along with the leads of the first Broadway show to re-open the Hudson Theatre in almost 50 years.

Theater Pizzazz’ Mark Ryan Anderson captured it all on video with Ruby Berube at his side on photos! Hudson Theatre, which played its last Broadway performance on April 20, 1968, has undergone a multi-million dollar project, restoring the landmark venue to its former glory as a Broadway playhouse. The venue has received significant front-of-house improvements to better serve its patrons, including all new state-of-the-art seating, Ambassador Lounge premium lounge service, and increased and improved ladies’ washrooms. In addition, significant backstage and technical upgrades, including new and expanded dressing rooms, and new fly systems have transformed the Hudson into a leading legitimate Broadway theater.

Situated just off Times Square in New York on 44th Street, between Millennium Broadway Hotel and The Premier Hotel, The Hudson Theatre opened on October 19, 1903 with a production of Cousin Kate starring Ethel Barrymore. Built by Henry B. Harris, a famous Broadway producer of that period, The Hudson Theatre is one of New York City’s oldest Broadway showplaces. The 100-foot long lobby was the largest ever seen on Broadway at that time. Among the stars that have graced the Hudson’s stage are Ethel Barrymore, Douglas Fairbanks, William Holden, Helen Hayes, Edward G. Robinson and Dorothy Gish. Barbara Stanwyck and Judith Anderson both made their debuts on its stage. On September 27, 1956 the first nationwide broadcast of “The Tonight Show” starring Steve Allen originated from The Hudson Theatre. It was granted landmark status for both its internal and external features in 1987.

Hudson Theatre is presented by Ambassador Theatre Group in association with Millennium Hotels and Resorts.

Sunday in the Park with George begins previews on February 11. Opening night is scheduled for February 23 with a limited 10 week run.