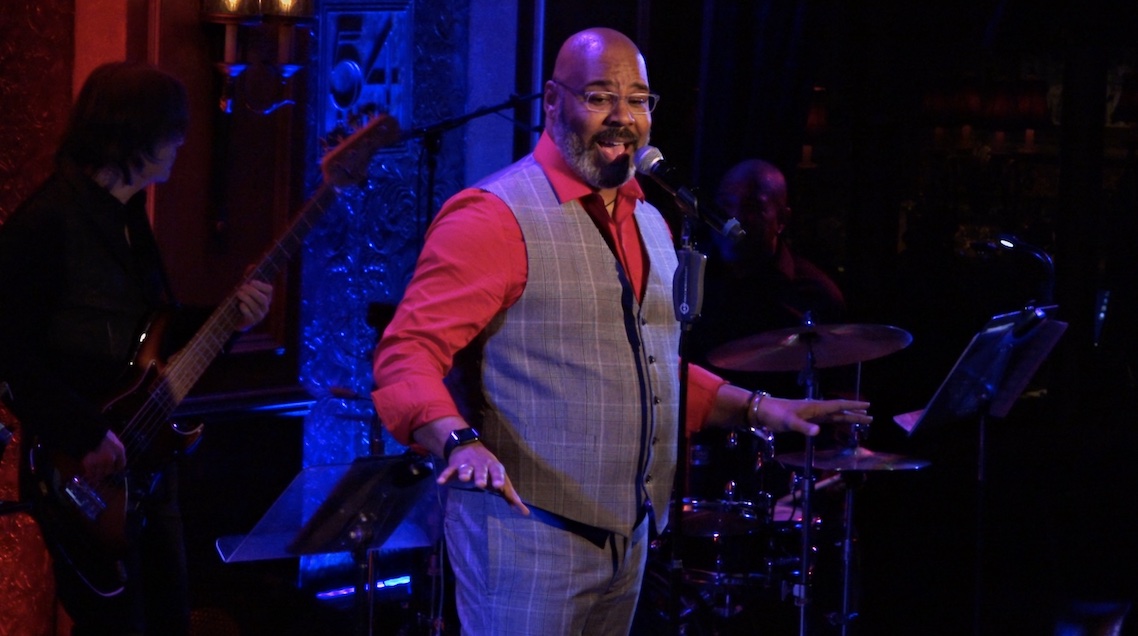 It’s the most wonderful time of the year, as the lyric goes, and, though there’s no sign of a “white Christmas” just yet, it didn’t stop consummate Broadway showman—and self-proclaimed holiday enthusiast—James Monroe Iglehart from hauling out the holly at intimate hotspot 54 Below for a cozy Christmas concert just like the ones we used to know.

Resolute in his declaration that December holidays produce the best playlist (“There’s just no music for Thanksgiving [or] Halloween!”), he takes us on a wonderfully warm and wintry musical journey, chronicling the classic Christmas music of his youth, while recounting childhood memories and family traditions that have followed him into adulthood, and shaped him into who he is today.

The set list is fairly traditional, as far as holiday concerts go, steeped in standards. Some songs are selected because they hold special meaning for Iglehart and his family, while others are longtime personal favorites of which he simply just can’t sing enough. No matter, as his robust, resonant baritone is a treat for the ears; his custom wit and captivating charm unmatched, and as he sings, “We need a little Christmas now” (and ain’t he right?!), so it’s easy—nay, effortless—to enjoy these songs afresh.

What’s more? Though it’s clear he’s enamored with the holiday and its music, unabashedly embracing its melodies, paying homage to the greats and reveling in the festive fun, in an effort to avoid monotony in a season where these songs are played everywhere ad infinitum, he doesn’t hesitate to turn them on their head, injecting each one with a glistening Iglehart touch, effectively, making each song his own.

Replete in a Santa hat and bathed in red-and-green lighting throughout the performance, he evokes his best Johnny Mathis, Ray Charles, Bing Crosby and Nat King Cole to spin classics like “The Most Wonderful Time of the Year,” “Rudolph the Red-Nosed Reindeer,” “White Christmas” and “The Christmas Song” as only he can. Particularly enjoyable is his devilishly delicious interpretation of Thurl Ravenscroft, whom he channels (uncannily!) to troll a certain Seussian Scrooge. A nod to Norm Lewis, an ode to Rankin & Bass, an (acknowledged) irreverent take on “What Child is This?” and a freestyle rap in the middle of his finale, all help to punctuate the individuality that permeated not only the material, but the atmosphere as well.

Beautifully interspersed both between and within these songs are the “family” stories alluded to in the evening’s title. These remarks ranged from his mother’s own musical past, to singing in show choir as a kid, to spotting Grinches in the shopping mall, to his unorthodox decorating technique, and—perhaps most touching—to the extraordinary adoration he has for his wife, and she for him. (Of note, stating he was never picked as soloist when the choir performed their annual rendition of “O Holy Night,” he redeems the snub entirely, with a rich, resounding version of the hymn).

But, on the subject of family, he doesn’t do it alone; his top-notch band—led by pianist John Deley, with Richard Hammond on bass, and Abe Fogle on drums—does much to add to the mystical merriment of the evening, with familiar instrumentation stirring up the nostalgia feels, and new riffs, not only showcasing their individual, excellent talents, but lovingly moving the needle forward, pushing the “traditional” into today.

Special guests also join in on the fun. First, Saint Aubyn—Dennis Edwards of Ain’t Too Proud—to provide that singer’s soulful “Silent Night” (complete with dynamic, dramatic preaching to the choir); followed by Hamilton’s Javier Muñoz igniting a friendly feud targeting Iglehart’s extreme distaste for the cold—the only Yuletide element our addict admits he can do without.

In a particularly moving moment, however, he recalls a harrowing experience upon first moving to New York, in which he, “broke, sick, and mad” over an exhaustive list of things gone wrong, tearfully calls his wife at their home base in California, who assures him that everything would turn out okay.

She showed up at his apartment at 5:00 AM the next morning, having hopped a redeye after his harried call, to provide him with the comfort and support she knew he needed in person. It was then, he shares, that he realized, “Home is not where you live . . . where you hang your hat or rest your head. Home is wherever that person who makes you feel good is. And as long as you’re with them—wherever the hell you may be—you’re home.”

And while the story is undoubtedly touching on a personal level, it’s pertinent because in a way, that’s what he did for us with this show. With his kind and generous spirit and an aura of celebration—quick to quote Bible passages and South Park songs in the same breath—he elicits pure joy and happiness with every note and spoken word. He provides a sacred space for us to collectively convene, enjoy ourselves, and forget our troubles—especially important given the terrible headlines of late, or the feeling of trauma the season sometimes stirs up in some of us. For 75 magical minutes and change, he creates a home. And at this time of year, it’s exactly what we need to make our spirits bright.