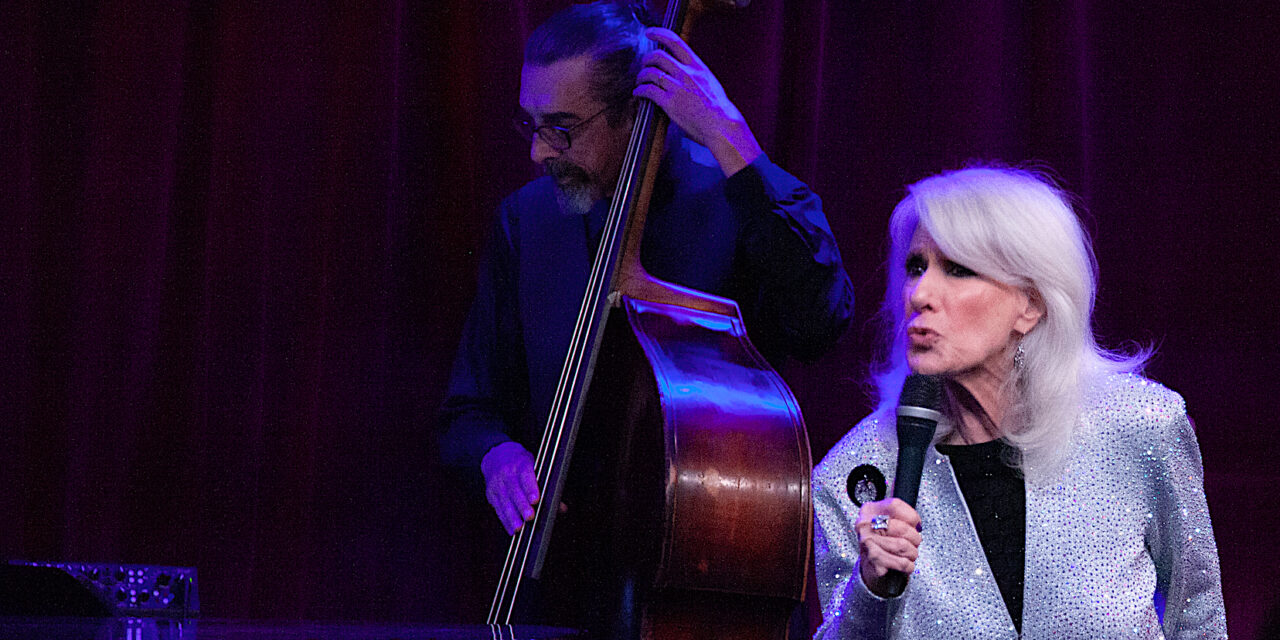 Over many years in show business as a performer, producer and host with the most, Jamie deRoy has made a lot of friends, many of whom have joined her for her long-running live and televised program Jamie deRoy & friends. In this latest edition at Birdland Jazz Club, the friends were performers wholly off the talent charts into the stratosphere. And, as has been the case for some time, the & friends shows benefit the Entertainment Community Fund (formerly The Actors Fund).

The effervescent deRoy started the evening with the most apt of songs, “There’s A Party Going On,” with music and lyric by Bryon Sommers and Ralph Fredericks, plus additional lyric by deRoy’s long-time director, Barry Kleinbort. Ron Abel music directed, his stellar piano skills providing the perfect match for every participant in the show. He was musically supported by Ritt Henn on bass, the pair at the ready to make music with five artists singing two songs each, with engaging back stories and personal reflections.

The luminous Karen Mason, winner of 14 MAC awards (yes, it’s a big deal), among other accolades, charmed as she always does, with her authenticity and humility. Her phrasing and timing on a jazzy “Pick Yourself Up” (Jerome Kern, Dorothy Fields) was indeed a pick-me-up. The late composer, arranger, pianist and songwriter, Billy Goldenberg, was a particular friend of Mason’s. She revealed that it was she who sang the demos for his musical Ballroom. But it’s from Goldenberg’s Sandbox film (lyric by Marilyn and Alan Bergman) that she sang “If I Close My Eyes,” a sweet song in which she conveyed the story with eloquent simplicity.

There are few performers who can sing a “naughty” song without a lick of offense being construed. Santino Fontana is one of them—a singer-actor of boyish charm who exudes lovability. And so with a twinkle in his eye, putting the onus on Bernadette Peters for directing him to this particular number, he offered “Making Love Alone” (Cheryl Hardwick, Marilyn Miller), a very funny if slightly racy tune about self-pleasuring. In a more traditional mode, Fontana delivered an a cappella introduction to “Who Can I Turn To” (Anthony Newley and Leslie Bricusse), entering into a dynamic rendition. He also disclosed that some time ago, the then Actors Fund helped him immeasurably with a medical issue.

A resident of Las Vegas, and therefore not seen in NYC as much as his fans would like, the ebullient Clint Holmes proved why he is a major star attraction in “Sin City.” His jazz rendition of “The More I See You” (Harry Warren, Mack Gordon), with a bass-only opening, featured plenty of swing, terrific phrasing and prime scat. But it was his own “1944,” to which he wrote the lyric to Bill Fayne’s music, that was a true heart-grabber. This ballad, a story song about his parents—a Black father in the US Army and his white English mother—and how they met during World War II, was touching and so much more. It reached deeply into the core of being, and thus you could have heard a pin drop as he told us of his family history in beautiful song.

Most anyone who has witnessed improv, for instance TV’s “Whose Line Is It, Anyway?” or Jason Kravits’ Off the Top, has to be left with head-scratching wonderment at the talent, lightning-fast thinking and on-the-spot creativity it takes to produce a funny result, let alone a coherent one. Singer-actor and improv ace of aces, Kravits, is astonishing. For example, he polled the audience for a text message, landing on “no, thank you.” From these three words he made up and sang an entire song. He improv’ed a song about Battery Park, calling Clint Holmes to the stage to help him out. Holmes jumped right in, and so a new song about the patch of land at the southern tip of Manhattan was created.

Continuing the pattern of offering a “lesser-known” song and a popular standard, Luba Mason, as the parlance goes, killed. She’s a force of nature, a born-to-the-stage performer who gives it all she’s got as standard operating procedure. With “Don’t Shoot the Hooey to Me, Louie” (Robert and Richard Sherman), she was in big fun mode with honky tonk flair. Citing the pandemic and shared travails of the last almost three years, she sang a song requested of her by Kleinbort: “I Can See Clearly Now” (Johnny Nash). With Henn switching to bass guitar, her rendition, in a masterful arrangement, was direct and true—a moving, prayerful delivery that spoke to hope and better times a-coming for all.

Wrapping up an evening full of boundless talent—collegial and lots of fun—deRoy offered what has become her signature song: “Jews Don’t Camp” (David Buskin). To hear her sing it, there’s no one else who could possibly compare. deRoy can claim ownership of it, along with kudos for unfailingly putting together friends of great talent, happy to help The Entertainment Community carry on its essential work.