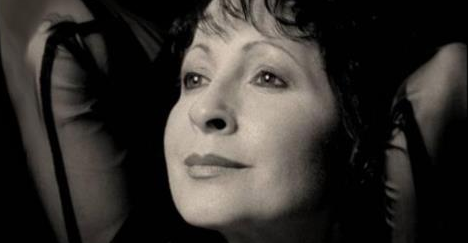 Janice Hall mesmerized the Metropolitan Room audience with the revisit of her 2010 show, Grand Illusions: The Music of Marlene Dietrich, delving into the songs Dietrich sang, not imitating her but evoking the chimera of this fascinating legendary icon.

Certainly the two women do not physically or vocally resemble each other. Dietrich was a sleek blonde, a photogenic and glamorous force of nature on screen and stage, famed for her long-sleeved, beaded “illusion” gowns. Her vocals were husky but limited, unlike Janice Hall, who enjoyed a substantial soprano opera career. Hall’s voice is now a secure and clear mezzo with a warm subtle vibrato that infuses her selections and snuggles easily onto an intimate cabaret space. Her hair is short and curly but with her long black gown with long black gloves, Hall, like Dietrich, brings a presence of dignity laced with passion.

Hall’s salute to Dietrich is part of Stephen Hanks’ New York Cabaret’s Greatest Hits Series with Associate Producer, Father Jeffrey Hamblin, MD. In an enchanting hour directed by Peter Napolitano, Hall talks about Dietrich, sharing brief anecdotes of her life and adventures that deftly connect to her songs. Creative and witty are musical director Matthew Martin Ward on piano and Ritt Henn, who adds various moods on bass and ukulele. They accompany Hall on this exotic journey from the Weimar Germany to Hollywood to live performances on large and small stages.

Dietrich’s film career was relatively short, from the late 1920’s to the late 30’s when she was labeled box office poison (with several other stars including Bette Davis). With the start of World War II, she turned to the USO, touring the front lines and drawing huge crowds from the troops. She made some films after the war, usually in supporting roles, but she made a lucrative turn into the world of nightclubs. Dietrich returned to Germany only once after the war where she was met with hostility and vowed never to perform in her homeland again. She went back only after she died in 1992 to be buried next to her mother in Berlin.

Unlike Dietrich, Janice Hall’s vocal training and experience is extensive. Her musical career included international opera and concert stages including the Komische Opera Berlin, the Salzburg Festival and the Los Angeles Philharmonic. She sang the role of Violetta in TV’s “Live from Lincoln Center” series on PBS’ La Traviata and her off-Broadway acting talent is evident in the interpretive and phrasing skill she brings to popular songs on a small cabaret stage.

Hall’s song selection moves from frothy to teary, tied into a tight narrative. “I Always Keep a Suitcase in Berlin,” refers to Dietrich’s lifelong emotional connection to her home city. Yet she also took advantage of humor, as in her audition song for The Blue Angel, choosing the perky “You’re the Cream in My Coffee” (B.G. DeSylva/Lew Brown/Ray Henderson). It earned Dietrich the role of naughty Lola in the film where she sang, “Lola” (Friedrich Hollaender/Robert Leibmann). Lolling on the piano, Hall worked the humor in Cole Porter’s “The Laziest Gal in Town,” accompanied by Ward’s bluesy piano.

The nostalgia of “When the World Was Young” (Philippe Botch/Johnny Mercer) was tender and dramatically nuanced. Hall’s full-throated French rendition of Marcel Louiguy and Edith Piaf’s “La Vie en Rose” was a nod to one of Dietrich’s closest friends and a song she often sang.   “In den Kasnen” (In the Barracks) by Philippe-Gerard/Hertha Koch/Janice Hall) feels as arresting as a slow march to death. A meditative honesty in “I’ve Grown Accustomed to Her Face” by Frederick Loewe and Alan Jay Lerner was as memorable as any I’ve heard.

Another highlight was “Das Lied ist Aus” (The Song is Over) by Robert Stolz, Walter Reisch, Armin L Robinson and Janice Hall. Hall delivered it as a smoky ballad, then put down her microphone and let rip the opera vocals that made her career.   A magical, evocative moment for a poignant song. “Falling in Love Again” (Friedrich Hollaender/Sammy Lerner) ended Janice Hall’s bewitching and perceptive look at the icon behind the illusion of Marlene Dietrich.