Jared Grimes: Christmas in the Lab 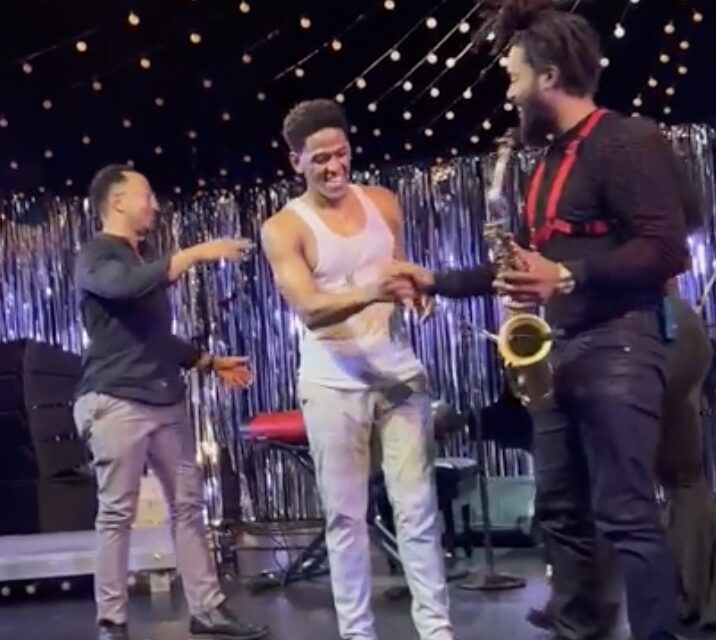 Broadway and TV star Jared Grimes has mastered a lot of talents: dancing, choreography, singing and acting. Three of those skills were on vivid display at Christmas in the Lab, part of Tinsel: A Global Holiday Festival at the Lucille Lortel Theatre. The Grimes magic happened in a transformed space—an extended stage overhung with a canopy of strung lights, emanating from a single mirror ball, and surrounded by shining mylar curtains. The dramatic setting portended a large portion of dramatic music and dance to follow. Grimes is many things, and among them he is an engaging showman. He was preceded by a musical introduction of progressive soul, reaching a crescendo of tones and chords. And thus he entered this soundscape with a first routine that blended his style of rhythm tap with robust hip-hop moves.

Since he believes “everything evolves around the music,” and true to this ideology, Grimes spun out a stream of consciousness program that navigated through dance, song and bits of philosophy voiced by him from time to time throughout the show. Basically, without taking a break, Grimes was an astonishing example of stamina, combined with a journey of exploration. Versatile and innovative, he possesses the grace of a Fred Astaire (a very early influence) with the athleticism of Gene Kelly, merged in a virtuosity all his own. In a way, he’s a one-man Cirque du Soleil, so it comes as no surprise to know that he’s choreographed routines for them.

Christmas in the Lab was an examination through movement and tap to “explore the infinite possibilities” of favorite Christmas songs. Much of the program seemed improvisational, with an extraordinary collection of jazz musicians maintaining precision in the groove and keeping pace with the star performer. Throughout the program, each was featured in the solo spotlight to shine in their individual virtuosities. Music director, arranger and pianist Mark Meadows led sidemen Endea Owens on bass guitar, Norman Paul Edwards on drums, Alfonso Horn on trumpet and Brent Burkhead on baritone sax. Of all the sidemen, it was Edwards who had a special presence in an extravagant rendition of “The Little Drummer Boy” (Harry Simeone, Henry Onorati, Katherine Kennicott Davis). Meadows displayed effective vocal ability with Grimes on a musically intricate “Purple Snowflakes” (Marvin Gaye, Clarence Paul, David Hamilton) as well as in duet on a dramatic “O Holy Night” (Adolphe Adam, Placide Cappeau/French lyric, John Sullivan Dwight/English lyric).

What’s clear about all of the elements of Christmas in the Lab, is that the show is ultimately about storytelling, be it in the musical arrangements, Grimes’ reminiscences or the message of the rhythms that his dancing produces. In fact, at one point in the program he invited the audience to connect through tapping to feel the rhythm—and tapping feet and clapping hands ensued to follow along. Totally at ease and in command of the stage, whose real estate he makes full use of, Grimes emerges as a skilled and authentic purveyor of joy. With Christmas songs such as “Once Upon a December” (Stephen Flaherty, Lynn Ahrens), “My Favorite Things” (Richard Rodgers, Oscar Hammerstein II) and “Carol of the Bells” (Mykola Leontovych, Peter J. Wilhousky), in their jazzy funk style, spirits were flying high with seasonal delight.

Tinsel: A Global Holiday Celebration continues thru December 31 – Tickets for individual shows are available at: https://www.lortel.org/tinsel