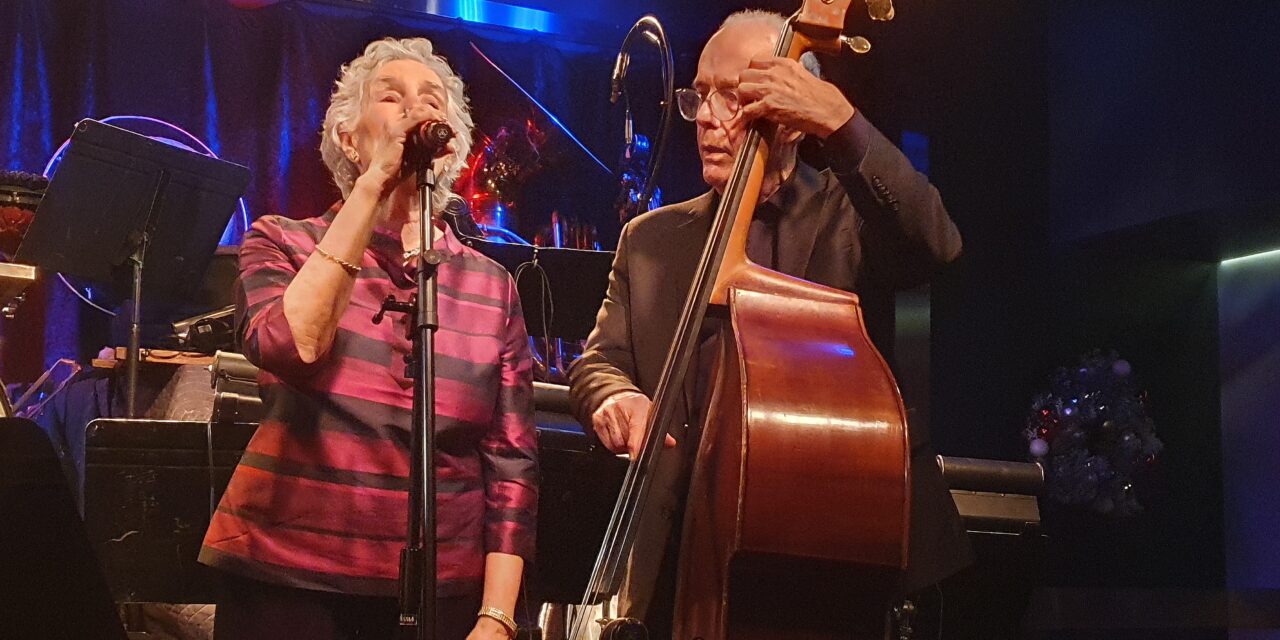 The great bassist and writer of delightfully quirky jazz tunes Jay Leonhart celebrated his 82nd birthday at Birdland Theatre on Tuesday, and Theatre Pizzazz was on hand to enjoy a smorgasbord of aural birthday treats, including many original tunes.  Jay was accompanied by the always terrific Tomoko Ohno, and joined by several guest performers throughout the 16-song, 90-minute set.  We reviewed his birthday show with his trio (including Ms. Ohno) a year ago HERE.

Leonhart’s overall style as a singing bassist and songwriter might well have inspired Bruce Miller’s Frasier theme song, “Tossed Salad and Scrambled Eggs” (sung by Kelsey Grammer).  In Leonhart’s opening tune, “Joy,” an original composition, he advises, “Misery is your mistress, and bad luck seems to be your wedded wife … time to change your attitude, and bring a little joy into your life.”  He added some scat doubling – often matching his bass notes with scat, and occasionally in counterpoint.  His performance ease belies the mastery that this requires.

Another original, “Don’t You Wish,” was introduced in 2018 on his album of the same name with Ms. Ohno.  The duo performed nearly half the album during this set.  The autobiographical song narrated his journey to becoming a bass player at age 13, after flirtations with the piano and guitar (which his brother mastered).  His lyrics could be mistaken for Dave Frishberg’s.  “Don’t you wish you’d taken up the flute?/People ask me every day/They really can’t conceive it, they really don’t believe it/that anyone would choose the bass to play.”

It’s always a kick when Leonhart performs “Me and Lenny,” about the time he wound up flying in first class sitting next to the legendary Leonard Bernstein from New York to LA.  They chatted warmly over various aspects of their lives, and of course, music.  Leonhart hoped it might be the beginning of a friendship.  “Not a goddamn word from Lenny since I left him in LA,” he sang.

Jay invited several family members up for guest spots, starting with his daughter, jazz singer and songwriter Carolyn Leonhart, a former backup singer for Steely Dan.  Carolyn has a wonderfully resonant speaking voice, great presence, and is a fine singer.  Carolyn sang “For Real” with Jay and Tomoko, followed by a swell father/daughter duet on “Down in the South,” with just Jay’s bass accompaniment.

Singer Tony Bennett once told Leonhart, “You’ve always got to do your ‘San Francisco!’” – Jay’s signature song “Bass Aboard a Plane,” about the challenges of getting this large instrument onto a plane.  Here, he elucidated just why choosing the bass is a much more challenging commitment than any other instrument.  “If you really want to cause some problems, if you really want to cause some pain, simply go down to your local airport, and try to put a bass aboard a plane.”

Jazz met Sesame Street when Jay’s sister, Valerie Leonhart Smalkin performed a charmingly funny ventriloquist act with her adorable doll/puppet called “Magdalena.”  This delightful bit culminated with “Magdalena” in a faux French accent, singing “All of Me.” As she sang “Take my lips,” Valerie removed the character’s lips, and removed the arms as she sang “take my arms.”  Jay enjoyed every second of this silliness.

Jay performed his “Dodgers” song about his wistful envy when the gal he married revealed that she regularly saw the Dodgers play at Ebbets Field in Brooklyn.  He’s still married to that gal, Donna, who is an accomplished singer.  Donna, who has great instincts and phrasing, joined her husband for “I Could Write a Book” and “I’m Old Fashioned.”  Their love for one another is palpable.

Young jazz sensation Anaïs Reno (covered several times by this reviewer) was a surprise guest near the show’s conclusion, singing Duke Ellington’s “Sophisticated Lady” with great skill and plenty of sophistication. Had there been any birthday cake served, this would have been the icing.

Leonhart’s “They’re Coming to Get Me” (from Don’t You Wish), is filled with stream-of-consciousness rhyming couplets about a fellow who is awaiting alien visitors to take him to their land.  “They want to do experiments in breeding, some genes and human chromosomes they’re needing.  Don’t be shocked when I have disappeared.  I volunteered, and they’re coming to get me.”

The set concluded with “When I Was a Little Boy,” a song Leonhart wrote about his siblings, three of whom were present.  He performed this song, which he had not sung in years, with just his bass as accompaniment.  The number cleverly includes the names of all six Leonhart siblings, “Jay, Jean, John, Beau and Val,” in the chorus.