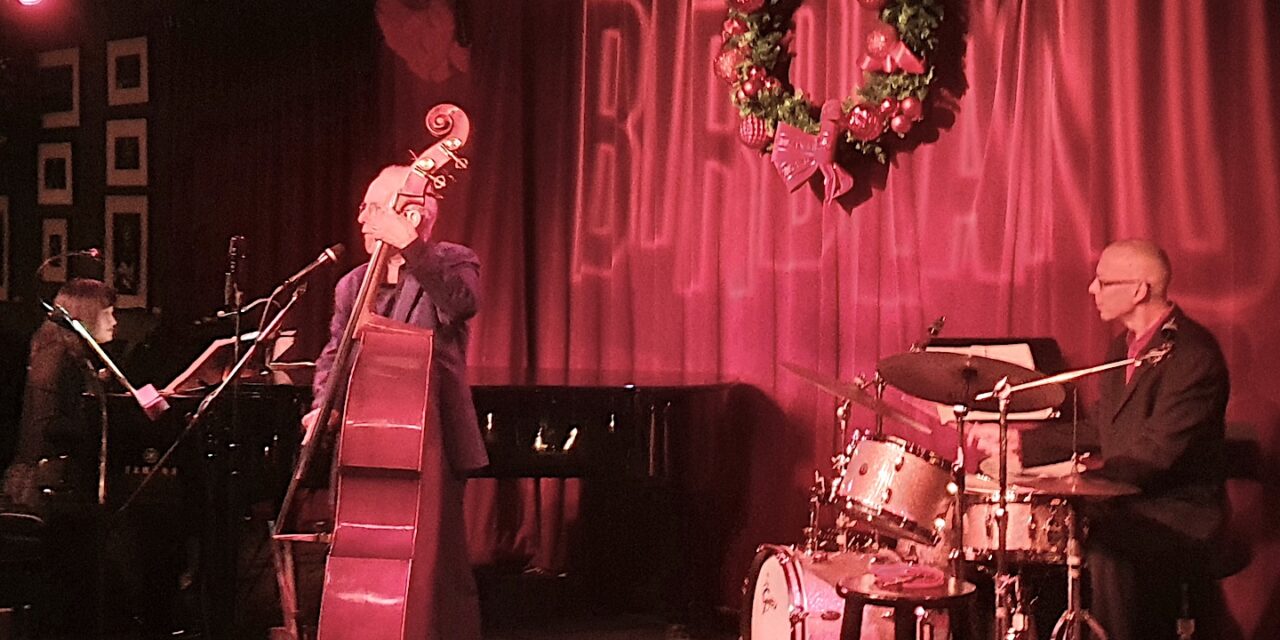 Jay Leonhart is known equally well among the cognoscenti for his sideman skills as a double bassist and as a songwriter and singer of funny, bass-centric songs.  The well-recorded Leonhart has performed with the likes of Judy Garland, Bucky Pizzarelli, Carly Simon, Frank Sinatra, and Sting, and was named three times by the National Academy of Recording Arts and Sciences as the “Most Valuable Bassist.”  Leonhart is noted for his clever songwriting, typically witty, biographical short tales with endearing, funny stories to set them up, with titles like “Bass Aboard a Plane” and “Me and Lenny.”  For the duration of the pandemic, since March 2020, Leonhart has done a daily “Live from 585” show on Facebook, often starting out walking near his Upper West Side neighborhood, telling stories and performing songs, many by request, from his home studio, with only his bass for accompaniment.

Where better to celebrate his 81st birthday (of three days earlier) than at the early show at Birdland, where Leonhart has been a staple for many years.  His 11-song set of primarily original compositions was a delight for the substantial audience.

Leonhart’s lyrics are consistently whimsical and funny, delivered with punch, and tight arrangements.  His personality and humor permeate every note.  His opening tune, sardonically entitled “Joy,” he advises, “Misery is your mistress, and bad luck seems to be your wedded wife … time to change your attitude, and bring a little joy into your life.”

Leonhart turned what must be quite the challenge for a touring bassist – flying with his instrument – into a funny story song, “Bass Aboard a Plane.” “If you really want to cause some problems, if you really want to cause some pain, simply go down to your local airport, and try to put a bass aboard a plane.”  Security “wants to give a bass a colonoscopy,” he sings, over complex bass slides.

Leonhart noted, “Sometimes when I’m playing a song, I remember why I wrote it.”  A highlight of the evening was a Leonard Bernstein trilogy.  First up was his composition, “Me and Lenny,” about the time he wound up flying in first class sitting next to the great Bernstein.  They chatted warmly over various aspects of music, and Leonhart hoped it might be the beginning of a friendship.  “Not a goddamn word from Lenny since I left him in LA,” he sang.  He did, however, receive a poster signed by Bernstein after sending him a recording of this song.  He moved on to “Cool” from “West Side Story,” enabling Leonhart to include a currently de rigueur Sondheim tribute into the mix, and a luscious ballad arrangement of “Some Other Time” (Leonard Bernstein/Betty Comden/Adolph Green) to complete the trilogy.

Leonhart relayed an epic, almost dishy story about a time he was a last-minute and unannounced replacement for the legendary bassist Ron Carter (recently reviewed here) for an opera star who was, to say the least, unhappy with the sight of Leonhart and upset at not being told of the change.  The star was extremely rude and nasty to Leonhart, and the engagement lasted but one miserable night.  He turned this disaster into a delicious piece naming the innocent Carter but sparing the diva in question from any identification.  Leonhart’s sliding, expressive notes made clear his disappointment over the incident.  He felt sorry for whomever would replace him, singing, “I wonder who the lucky soul would be.”

This reviewer’s guest for the set, master pianist and walking music encyclopedia Jon Weber, weighed in with his thoughts on the evening: “Jay’s astonishingly full-sounding trio played in 4/4 but were all over the map harmonically. Clever turnarounds and interludes galore kept me on the edge of my seat. They read each other’s minds. Jay plays such a tremendous variety of rhythms and hemiolas – while singing! Vito and Tomoko picked up on every single one – while quoting ‘spare parts’ (as Teddy Wilson called them) of other songs upon the fertile chord changes of Jay’s original songs – which comprised most of the night. I heard Tomoko Ohno quote ‘Love Letters,’ ‘Witch Hunt’ (Wayne Shorter) and several Ellington tunes in her exquisite solos. Vito Lesczak even recognizably quoted Elmer Bernstein’s ‘Magnificent Seven’ main title on his drums.”