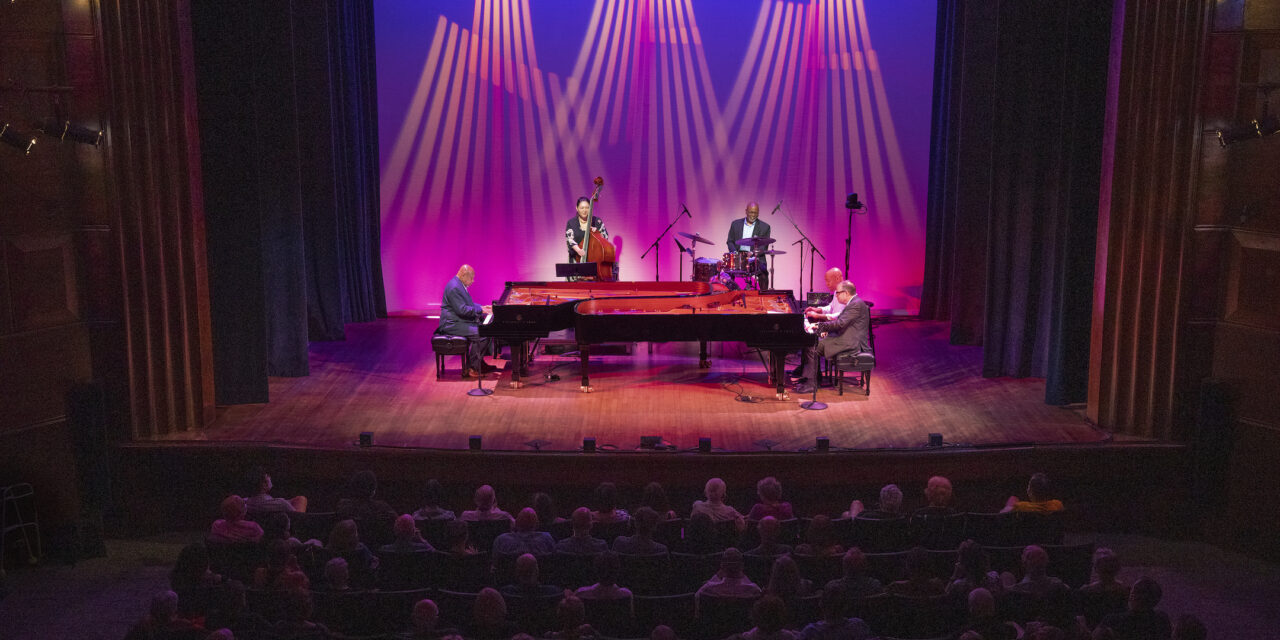 Since 1984, under the artistic directorship of pianist, Dick Hyman, Jazz in July at 92Y has been presenting prime jazz concerts, with 2004 being the year when Hyman was succeeded by pianist Bill Charlap. It seems musically poetic then, that one of this year’s four concerts was piano-centric, featuring Charlap with veteran NEA Jazz Master Kenny Barron and Aaron Diehl, one of his generation’s most exciting pianists.

In this magical program of three generations of masters, this “jazz piano summit” was sheer bliss. Barron, 79, came up in the bebop era, much influenced by his time with Dizzy Gillespie. In that band he encountered Latin and Caribbean rhythms, which added lyricism to his improvisational skills—honed under multi-instrumentalist Yusef Lateef. Charlap, 55, has been playing piano since the age of three. He studied classical music as a foundation for jazz, with an especial natural affinity to the style of the late Bill Evans. An early prodigy, Diehl, 36, was greatly influenced by Wynton Marsalis, who acknowledges his love of the “Ellington Ethic.” Diehl also studied with Barron, closing the generational circle. With two pianos on stage, the trio delivered breathtaking solos and wondrous duets. For most of the program, rhythm was represented in bassist Noriko Ueda and drummer Lewis Nash.

Charlap and Diehl thrilled with pianist Dave Brubeck’s 1955 classic homage, “The Duke,” sticking close to the original Brubeck Quartet arrangement—clean playing as per the Maestro Ellington (in contrast to versions such as George Shearing’s, which extended the tune with improvisation). Nash, a virtuoso drummer, who makes of his instrument a source of sound deliriously nuanced, did just that with mostly cymbal work on the number. Nash also astounded in a drum duet with Diehl on jazz pianist Bud Powell’s 1949 composition, “Tempus Fugit” (also known as “Tempus Fugue-it,” although the work is not a fugue—but the title is dual pun, reflecting the speed at which the number is played). Here Nash applied extensive brushes to the hard-driving tempo.

Charlap took the keys for Oscar Pettiford’s “Bohemia After Dark.” Pettiford was a virtuoso bassist, cellist and composer, whose innovations, like contemporary Jimmie Blanton’s still resonate and inform modern acoustic bass players today. Like Blanton, Pettiford worked with the Duke Ellington Orchestra for three years, and like Blanton, died too young, at age 37. Taking the solo lead in “Bohemia After Dark,” Ueda demonstrated why she’s a leader in her field and master of her instrument, with creative playing on and off the melody. With Barron, on “How Deep Is the Ocean” (Irving Berlin), her playing was intensely organic, conjuring up a feeling of oceanic flow and depth. Diehl is known for mastery across musical genres, and to illustrate the point he performed one of Roland Hanna’s preludes. Hanna started and ended his piano career by playing and composing classical music (chamber and orchestral, plus ballet), being enamored of and a practitioner of jazz in-between.

This piano paradise of music written largely by virtuoso jazz pianists, and played by three of the same, ended with all hands on deck and Barron’s own work, “And Then Again.” With Barron on lead piano there was no doubt of his ability to make bebop lyrical with playing so elegant as to seem effortless. Manning the second piano, Charlap and Diehl alternated, with the finale featuring four-handed playing in full with Barron, Ueda and Nash. Thus ended a remarkable concert, a luminous piano tapestry, and another jewel in the crown of artistic director Charlap.  His Jazz in July programs never fail to present prime material, with amazing players, and with hosting full of charm and delightfully informative narrative.