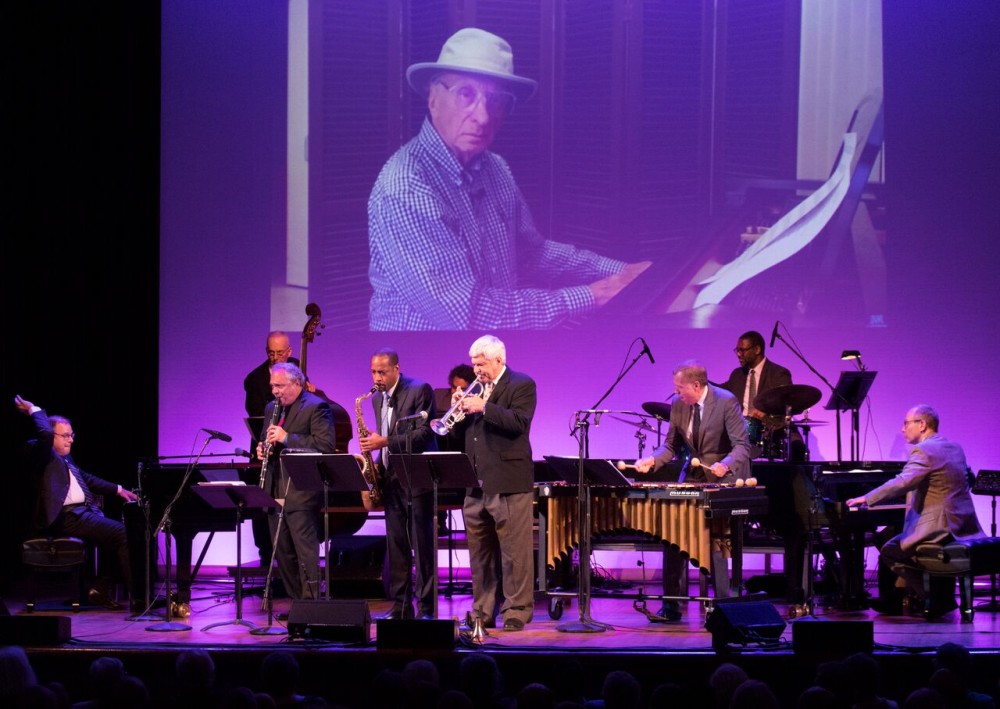 Dick Hyman via Skype & The Band

Possibly there could have been no better way to kick off the 92Y’s annual Jazz in July series than to honor its original Artistic Director, Richard “Dick” Hyman, with a rip-roaring, jazz party of a tribute. Hyman ably headed Jazz in July for twenty years before handing over the baton to pianist Bill Charlap in 2004. On this 2017 series inaugural concert, it was Charlap’s pleasure to present a proclamation to Hyman, via Skype, from New York City Mayor, Bill de Blasio, declaring July 18 as “Dick Hyman Day.” Not so incidentally, the honor included a 90th birthday acknowledgement to the now legendary Music Director, pianist, organist, electronic musician, arranger, composer, jazz historian, and National Endowment for the Arts Jazz Master. With the evening devoted to Hyman, Charlap (a distant cousin of Hyman’s, incidentally) assembled a stellar cast of musicians to play the master’s music. In addition to Charlap and Ted Rosenthal on pianos, the band featured Howard Alden (guitar). Dennis Mackrell (drums), Ken Peplowski (clarinet), Walter Blanding (tenor sax), Randy Sandke (trumpet), and Chuck Red on vibes (a terrific choice to bring texture to the group’s ensemble work). A special mention goes to bassist Jay Leonhart, whose playing on the upright bass solidly anchored the music through all variations and combinations of play. From the band’s opening number, “Sweet Sarasota,” a straight ahead Hyman swing tune, to the Brubeck-like “I Hope Gabriel Likes My Music,” to the melodic, upbeat “Swing Is Here” with it’s playful ending, it was apparent that these cats were in complete sync and ready to play hard. These are a community of musicians who not only know each other from past gigs, but some have also played with Hyman. The happy result is a special understanding and respect for the material, especially in interpreting Hyman’s many moods and his versatility. To prove their own versatility, the entire complement also swung the classic “Stompin’ at the Savoy” (Benny Goodman/Chick Webb/Edgar Sampson/Andy Razaf) with a groove somewhere between Webb’s driving beat and Goodman’s mellow approach.

Hyman’s ability to take early jazz music and infuse it with modern ideas was displayed in two variations on themes, played by Charlap — Hyman’s improvisation transcription of Scott Joplin’s “The Entertainer” and 1917’s “(Back Home Again In) Indiana” (James F. Hanley/Ballard Macdonald). With Ted Rosenthal, Duke Ellington’s 1928 “Jubilee Stomp,” with its fast tempo and heavy beat, was arranged as a fierce stride piece. The stride style, popularized in the 1920s by James P. Johnson, is often a test of mastery. While the right hand plays the melody line, the left plays a single bass note or octave on the strong beat and a chord on the weak beat. By the time Charlap and Rosenthal ended their wizardry in playing the piece, it was clear the audience had been thoroughly caught up in the exhilarating performance. Also thrilling were piano duets of Hyman’s onomatopoeic “Rap #3” and his swinging “Bird in the Roost/Deep Groove.” Singer Sandy Stewart, Charlap’s sophisticated mother, offered three numbers, each delivered with tremendously empathic support on piano by her son. The standard “Nobody Else But Me” (Jerome Kern/Oscar Hammerstein II) and a lesser-known work by the duo, “All in Fun,” plus Kern and Dorothy Fields’ “Remind Me” were a testament to the power of storytelling in song. As a woman of a certain age, Stewart’s phrasing and vocal control were potent allies to her mature range and abilities. Without raising her voice more than was necessary, Stewart hit her targets with emotional force and affecting depth.

Special moments dotted the Dick Hyman Forever! evening, including, via Skype, an interview with Hyman and video tour of his Venice, Florida studio, followed by the master himself playing a mezmerizing improvisation on George and Ira Gershwin’s 1927 classic, “ S’ Wonderful.” An extraordinary treat was the screening of a 1952 television clip (from the Dumont Network), featuring the only TV appearance ever made by the legendary jazz innovator, alto sax player Charlie Parker. With Dizzy Gillespie on a standard trumpet, Sandy Block on bass, Charlie Smith on drums, and Hyman taking a grooving piano solo, the group swung the bebop standard “Hot House” (Tadd Dameron). The finale was a fitting end to a beautifully-paced evening of stylistic variety played by creative combinations of musicians. Citing Hyman as always a “modernist,” Charlap and company – with Hyman on piano via Skype – laid down a cooking “Minotaur.” This number charted in the US top 40 in 1969 and represents Hyman’s foray into electronic music and the Moog synthesizer. It was possibly as good as it gets, and a terrific way to play out for an amazing man who, at 90, is still on the top of his game in every way.