Jean Louisa Kelly: Anything Can Happen 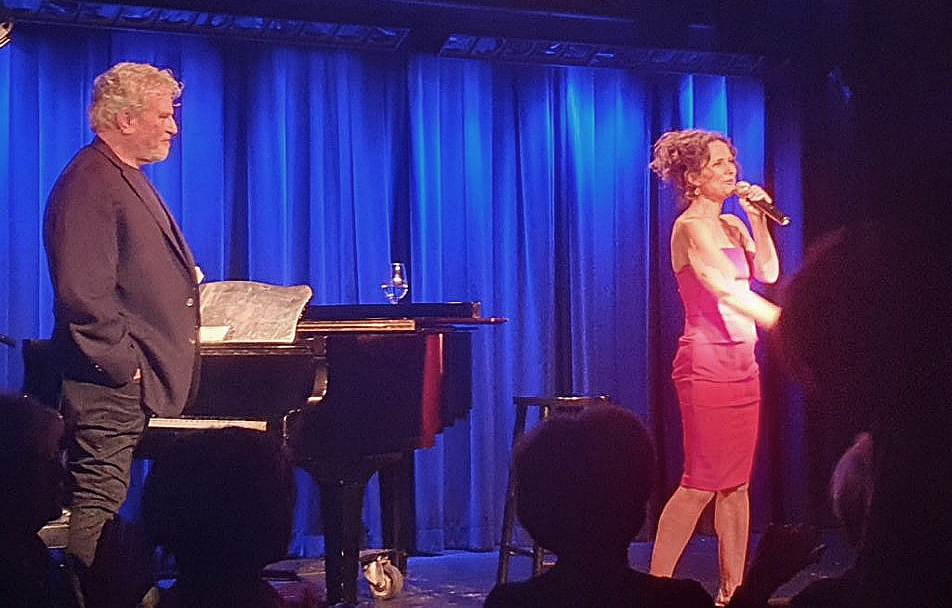 Film, television and stage star Jean Louisa Kelly is a performer who has been in the public eye since her teens.  She made her film debut in the 1989 hit Uncle Buck, opposite the late John Candy.  You may remember her captivating performance of “Someone to Watch Over Me” Mr. Holland’s Opus, or her six seasons as Kim Warner on television’s Yes, Dear.  If you were really lucky, you saw her as Snow White in the original cast of Into the Woods.  Most recently, she played Val Kilmer’s wife in Top Gun: Maverick.

Ms. Kelly took some years largely away from the limelight to raise a family.  She has now taken her considerable talents to the cabaret stage, and unveiled her New York debut show at The Laurie Beechman Theatre at the West Bank Cafe to a sold-out room. The show was also livestreamed.

The beautiful star took the stage looking radiant in a form-fitting red dress, her curly hair tied up behind her.  Her only accompaniment was her musical director, the Emmy- and Grammy-winner Paul Bogaev.

With a snippet of the wistful “Maybe” from Annie and then a robust “Some People” (Gypsy), Ms. Kelly began telling her story, much of which seemed to involve alcohol.  At times, she was self-deprecating, as in the funny “When I’m Drunk I’m Beautiful” (from Prettybelle, by Jule Styne and Bob Merrill).

The aforementioned “Someone to Watch Over Me” was especially meaningful to fans of the film, and the star was simply splendid here.  She then told the very funny story of meeting her “someone,” husband James Pitaro.  She narrated it like a film-noir voiceover, to great effect.  She made her intentions clear with “You’re the One That I Want” from Grease, which included a duet with Paul Bogaev on the counterpoint lines.

Ms. Kelly’s renditions of “Soon It’s Gonna Rain” and “They Were You” (from The Fantasticks) were beautiful, thoughtfully arranged and phrased.  Mr. Bogaev provided harmony on the latter tune.

Perhaps Ms. Kelly was a bit nervous about her marriage to Jimmy, as she broke into Sondeheim’s comedic “Getting Married Today” (from Company).  This fast-talking patter song is a challenge – one verse contains 68 words to be sung in about 11 seconds!  The star was well up to this daunting task, with not a missed word or breath.  Brava!

Appropriately, she followed this song with “Jimmy” from Thoroughly Modern Millie.  The show is as much a love letter to her husband as it is her life story.

Perhaps the most powerful song of the evening was “A Change in Me” from Beauty and the Beast.  Ms. Kelly was at her most vulnerable here.

Ms. Kelly closed the show with the title song, “Anything Can Happen,” from the Broadway show Mary Poppins.  The song fairly well sums up the star’s life philosophy.

From her opening number, to her final bow, Ms. Kelly seamlessly wove carefully chosen Broadway songs with her autobiographical script.  (Even her big number from Mr. Holland’s Opus is, of course, from the 1926 Gershwin show, Oh, Kay!)  She took us on a journey from her early teens, to her stardom, to meeting the love of her life, and to today.

This tightly written show was impeccably performed and quite polished.  It was, perhaps, too polished.  There was the sense that every note and gesture was as scripted as the story, rehearsed until flawless.  In that regard, Ms. Kelly does not yet share the authenticity and vulnerability of the greatest cabaret stars.  Still, she has a lot going for her in terms of talent, charm, and appeal.  An evening with Jean Louisa Kelly is one well spent. A replay of the livestream is available for streaming through the end of February HERE.