In Conversation With Jeanna De Waal 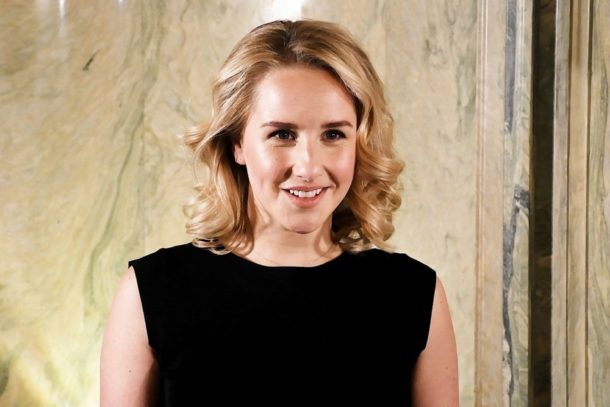 Covid-19 may have shuttered Broadway, the West End and tours across the world.  But it didn’t extinguish the dream actress Jeanna De Waal and her sister Dani had five years ago.  That dream, of bringing the Broadway experience to people of all stripes and abilities.  Broadway Weekends evolved from multi-day in-person camps for those triple threats with day jobs or school, into Zoom-based classes of all types.  Taking advantage of the time and medium allowed the De Waal’s and their team to pivot and broaden the scope of Broadway Weekends at Home to include working professional performers teaching some 25 classes a week to enthusiasts of all ages and backgrounds via Zoom.

Now anyone can log on to Broadway Weekends at Home (via Facebook or Instagram) and experience a spectrum of classes – from specific show choreography, tap lessons, acting through song, Shakespeare, reading music among others.

The idea for Broadway Weekends may well have fomented as De Waal and her sister arrived in New York for family theater trips.  Traveling in from their London-based theater arts boarding school, the sisters and their parents took in as many shows as they could.  Quickly learning they could cram in one more show by tucking their baggage in a theater’s coat check.  Jeanna earned a role in the West End production of the Queen musical We Will Rock You and de-camped for New York at the age of 22.  In New York, she appeared in Kinky Boots and American Idiot.  As Covid-19 emerged she was starring as Princess Diana in Diana on Broadway.  Earlier in her career she participated in (by her count) 100 musical workshops and readings and found “the most exciting part was the rehearsal room where the production was still our’s.  Once you perform before an audience, they take ownership.”

Capitalizing on that excitement, the De Waal’s started Broadway Weekend.  These camps have 100 or so participants from all backgrounds and ages learning choreography, songs, and scenes taught by actual Broadway and West End performers – culminating in a performance in an off-Broadway theater.  Over the past few summers, hundreds of accountants, marketing managers, doctors, nurses, and other people have achieved their performance dream via Broadway Weekends – the first camp dedicated to performance led by actual artists.  “Professional programs exist,” said De Waal, “But it’s a whole other world to learn a dance from Wicked from someone who actually performs it eight times a week.”  The retreats are intense with five days of master classes and rehearsal.  “Acting is hard.  It’s a tough business that can wear you down.  But teaching makes me overjoyed…while there are challenges to being an accountant or another profession, (our attendees) love singing and dancing and I’m fueled by the participant’s energy and enthusiasm.”

The Weekends quickly expanded with pop-ups occurring in cities across American in conjunction with performers from the national tours of “Mean Girls”, “The Band’s Visit”, “Come From Away”, “My Fair “Lady” and “Once on This Island.”  While the Corona Virus put those plans on hold, De Waal and team embraced the technology of the moment Zoom – to Broadway interactive classes in your home.  “Now people of all abilities, ages, and experience can participate,” said De Waal.  They quickly established a Facebook group (Broadway Weekends at Home) as well as an Instagram account to help over 5,000 people enjoy these free classes led by Broadway, West End, and national tour artists.  “There’s so much more to theater than watching and receiving a story,” remarked De Waal, “I love exploring theater through experiential learning and listening.”

And that’s exactly what Broadway Weekends at Home allows.  While the Broadway Weekends allow participants to learn a show, experience the rehearsal process and perform.  At Home, gives you a free hour-long chance to hone and acquire new skills like a few dances from Mean Girls, acting through song, singing technique, as well as stretching and yoga.  These intensive bursts of education are joyful and inspiring and fun.  Participation is infectious as people clearly want to learn new skills and get fulfillment while enthusiastically challenging themselves while bridging a theater loving community across the world.  “For my own education, I marked success singing one note higher, standing on one leg longer.  These are achievements that deserve meditation and focus,” commented De Waal.  And her stated goal is to allow Broadway Weekends at Home to bring that experience to as many theater lovers and students of all ages, anywhere in the world.

Now Broadway Weekends at Home is expanding by reaching out to community theater, schools, colleges, businesses whose employees want to hone their salesmanship by participating in master classes with theatrical professionals.  De Waal and team are working with a Portland based school whose production of Mamma Mia was scuttled by Corona to link those students with a professional company.  In a special Zoom the students and professionals will compare notes and talk about the performance experience.  Private master classes are available for any organization or individual who want to work with the best in the world artists and bring valuable Broadway skills and experience into your home without flights.

**It was just the beginning of February that TheaterPizzazz had the pleasure of meeting and interviewing the cast of Diana and Jenna De Waal at a press meet prior to previews!