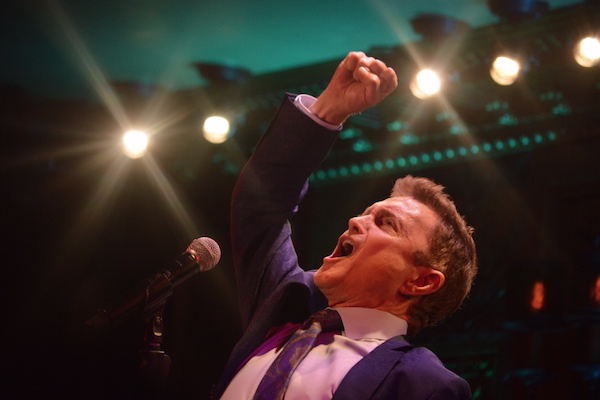 It was a night of intense feeling, and a debut at Feinstein’s/54 Below of stratospheric proportion on November 10th.To say that love filled the air at Jeff Harnar’s I Know Things Now would be a huge understatement. It was a magnificent show about life and love in its many forms, delivered with love to an admiring audience who supplied multiple standing ovations at the end of it. If these superlatives seem to overflow—well, you had to be there. Harnar and I Know Things Now created magic.

The musicals of Stephen Sondheim, to paraphrase Bette Davis, aren’t for sissies. His works are complex musically, but even more so tricky when it comes to lyrics. Sondheim’s words are deep. Sure they can be vocalized without working up a sweat, but to translate their powerful meaning takes intelligence and the skill to put Sondheim’s intention across. This Harnar accomplished, combining acting ability with charismatic energy and a creatively flexible mind. Surely the spirit of that great master of lyric interpretation, Mabel Mercer, hovered over Harnar with delight as he made every word, every gesture, every phrase and musical note count—most particularly, in his stunning rendition of “Send in the Clowns.” When this number became a huge hit in 1973 and it seemed every entertainer on a stage was singing it, Mercer, at the end of her fabulous career, knocked them all out of the park with an interpretation so powerful it could have stopped clocks. With Mercer’s, Harnar’s version is definitive.

I Know Things Now is sung-through. With a brief introduction, Harnar announced, “the music and words are Stephen Sondheim’s, but the story is mine.” And so, without text, the song choices—their arrangements and flow within the whole— became an autobiographical arc and window into Harnar’s world. Many of the songs were introduced by women in the various works sourced. In Harnar’s context they not only demonstrated gender fluidity, but spoke to the same-sex reality of life. His “Getting Married Today,” with its rapid-fire delivery was like a Gilbert and Sullivan patter song and very impressive (as well as amusing). This tune was part of a medley—“The Little Things You Do Together/Marry Me a Little/I’m Calm,” a device used throughout the show. These intelligent combinations, such as “Children Will Listen/The Ballad of Sweeney Todd,” offered observations and commentaries on the living of life in all of its pushes and pulls, ups and downs, defeats and glories…in other words, a full range of emotions.

The circle of life was completed with the bookending of “I Know Things Now/More.” A coda of “Being Alive” and “Old Friends” was an encore acknowledgement of the pandemic that caused us all to be isolated from each other for 18 months, and the gratitude of being together again in person. Deep thoughts all… but Harnar offered a cherry on the sundae, a capper that turned to celebration: Rick Crom’s parody “Sondheim’s Oklahoma,” a staple of Harnar’s vast repertoire.

All through the odyssey and journey of I Know Things Now was the musical support of pianist-music director Jon Weber. He’s a much-sought-after accompanist and arranger, with good reason. Weber has an incredibly flexible and adaptable style of playing. He “gets” the vocalist’s objective and plays accordingly—on top of a platform of a solid jazz sensibility. His creative ideas, intelligent riffs and exquisite timing was a joy to hear. Weber and Harnar made a perfect pairing for I Know Things Now. Also deserving a laurel wreath is director Sondra Lee, whose knowledge and keen eye vis-vis musical theater performance helped Harnar shape a magnificent show.