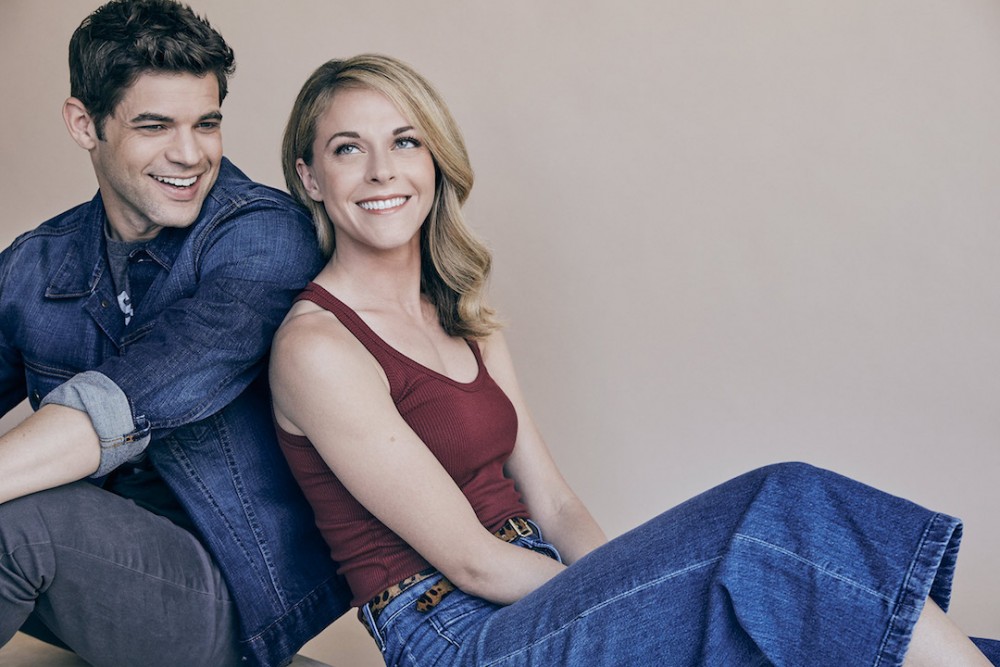 The husband and wife team of Jeremy Jordan and Ashley Spencer put on quite a show at Sony Hall – and it certainly wasn’t your mother’s cabaret. The appealing couple was in millennial mode, as a throng of appreciative and vocal peers cheered them on. From their first duet, “Automatic,” it was clear that the mood of the show would be energetic, cannily geared to this specific audience – and loud.

The conceit of “Starring Opposite You” was that the two have never done so in almost a decade of togetherness. This outing served as a “dream come true” to correct that deficiency. Each has had significant presence on the musical theater stage, especially Jordan, with several turns on Broadway. Their “Miscast Medley” featured ten musical theater numbers including “Moving Too Fast,” “When You Got It, Flaunt It,” “Raise A Little Hell” and “Santa Fe.” Another mega-medley, the “90s Throwback Medley” of 12 numbers, included pop chart hits such “I Don’t Want To Wait,” “Closing Time,” “Barbie Girl” and “Ironic.” A three-song “Waitress Medley” was a crowd pleaser as was the compact closing “Future Roles Medley,” ending with “Suddenly Seymour.” These medleys only scratched the surface in a nearly 2-hour show packed with extensive narrative and music. The presentation was polished, as one might expect, and well paced, with the couple singing duets and individually.

As to the narrative, it was very personal and included slideshows of the couple in both professional and private moments – for example, childhood photos, pictures of their dog and of their wedding. For the “leading lady of his life,” Jordan sang his own composition, “Ashley’s Song.” The couple’s togetherness was demonstrated again in the encore number “You’re All I Need To Get By.” Jordan, Spencer and their audience are individuals raised on social media, so the intimacy and the “we’re all in this together” dynamic is natural to them – and probably expected. This style of performance is very different from that of older generations of performers who maintain a certain distance even in what appears to be a very personal show. For those to whom social media is a part of life, this kind of peer-level presentation is natural. For older generations, this approach may not work.

Another phenomenon of the millennial generation is that, when it comes to singing, the loud power voice is apparently preferred. Jordan and Spencer delivered those goods, mostly in their medleys. The ambience of Sony Hall encourages this performance style. Located in the basement of the Paramount Hotel, the space is large and somewhat cavernous – a mixture of cabaret and stadium. The high-tech nature of the venue supports cutting-edge lighting and a sound system with decibel levels that could be heard on the moon. But the pair also demonstrated an appreciation for nuance and vocal dynamics in their solos. Spencer’s “Can’t Help Loving That Man of Mine” and “Embraceable You” were sensitively delivered. Jordan’s “Bring Him Home” not only showed an appreciation for the lyric, but also demonstrated his excellent vocal range.

Backing up the two on some number were Sean Doherty and Jillian Soares. Music director, Benjamin Rauhala, chose to play a keyboard rather than a piano, further emphasizing the rock concert nature of the show. He was supported by excellent musicians Eric Davis on guitar, Mairi Dorman-Phaneuf on cello, Shannon Ford on drums and Alan Stevens Hewitt on bass.