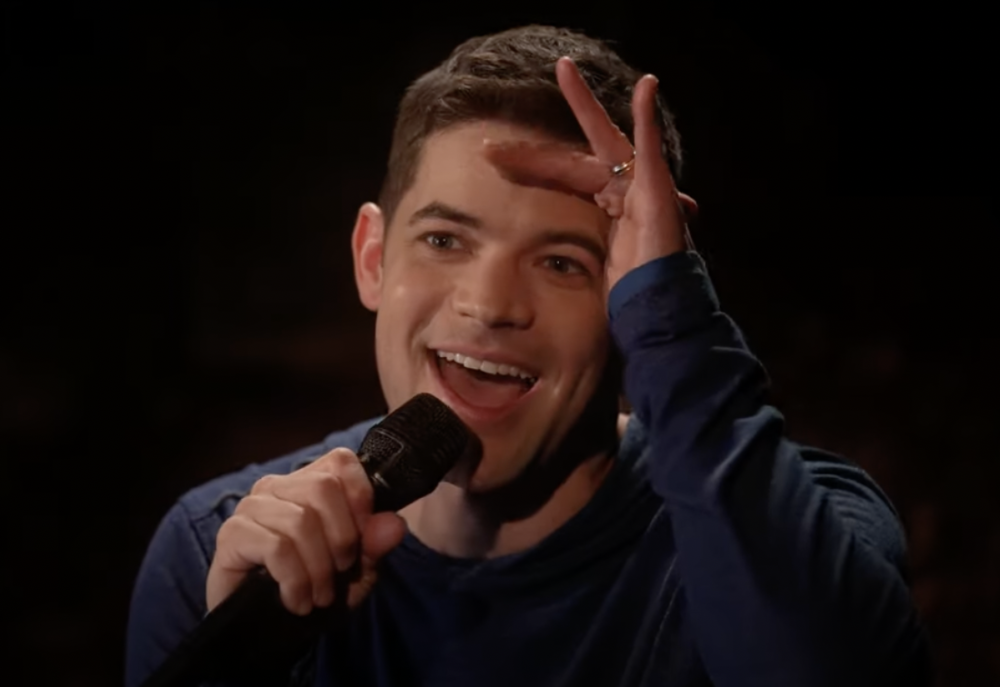 The first time I watched Jeremy Jordan perform, he was a mesmerizing 27-year-old Broadway star-in-waiting, playing Clyde Barrow in Broadway Musical, Bonnie and Clyde. Audiences, including the one that surrounded me, loved it. They stood up, cheered and applauded, but Bonnie and Clyde closed 29 days after it opened. Why? It was ambushed by Broadway critics who weren’t as entranced as regular audiences by Frank Wildhorn’s melody packed rockabilly-blues-gospel score. The first time I wrote about Jeremy Jordan was three years later when I was so entranced by his bewitching one-man show at 54 Below I called him The Future of Broadway, thought he might be the next Hugh Jackman. Lots of water and appearances have passed under the bridge since then including Jordan’s starring in Newsies, on TV’s Smash, etc. etc. Let’s not forget the pandemic which has kept everybody inside and in sweats or pajamas for the past year plus.

In that interval Jeremy has become a dad, totally in love with his 2-year-old totally precious daughter, Clara, a real charmer. She’s the focus of his new Virtual Cabaret Show at 54 Below entitled Jeremy Jordan: Carry On.  Carry On allows Jordan to investigate and display all his considerable emotional baggage, in the hope that exposing it will allow him to free Clara from similar negative experiences. I certainly hope so. And yet, despite the calamities that beset him, he has carried on, becoming a remarkable performer. His joy in his daughter has allowed him to start writing very appealing songs.

Carry On originally opened with Jeremy Jordan at 54Below before a live audience on the eve of the Pandemic and then, like most artistic ventures that required a living breathing audience clapping in place, was furloughed for about a year while the plague ran amuck. Today, Carry On, has returned via the internet. Jordan and his remarkable band are back on stage at 54Below, but the audience is still at home. For how to watch it, see details below.

Carry On opens with a tracking shot of Jeremy Jordon in leather shoes, jeans, a Mark Zuckerberg grey t-shirt and a dark hoodie, the outfit he also performs in, pulling a non-descript wheelie behind him. The wheelie contains souvenirs of the high and low points of his life. I’m an old lady and still recall sophisticated outfits worn by individual performers and audiences alike when they were out for a night on the town, but Jeremy Jordan belongs to a considerably younger generation, who are less formal and whose less demanding outfits make their talents shine even more.

The show opens with a song he wrote, “Carry On,” when the former song with the same title that opened his pre-pandemic one-night-stand presented him with music rights problems. Almost every song in the show is a love song to Clara, his daughter. His wife, who he describes as pretty much perfect, remains anonymous. He never refers to her by name. Tsk. Tsk.  Actually, his wife is a dancer and singer and absolutely gorgeous.

She appears in the family photos shown after the credits.

Many of the songs in his program swing with a Country and Western rhythm and vibe and are composed in a minor key, a combination which is very appealing. Sometimes, he swallows the lyrics, so if you, like me, are unfamiliar with a tune, you never quite manage to make out all the lyrics. The words to a song are what give it meaning. The music gives it emotion.

Jordan’s life was happy and very sad, and you’ll hear him tell about these events in a most interesting and touching way. Most of the songs in his program are very appealing, and quite appropriate for the event that he connects each one to. I particularly liked an Allison Krause hit, “When You Say Nothing at All,” and “Santa Fe,” from Newsies, a Broadway hit in which Jordan starred. I would have preferred hearing a medley of songs from Bonnie and Clyde, or Smash rather than tunes from Disney shows. Jordon closes Carry On with “Flesh and Bone,” an appealing melody with words and music by him.

Jordan’s love, and his hopes for his child, come through completely. But as someone who somehow raised a son who does work that he selected and loves without my advice and still calls me to talk to me, I want to give Jordan some advice. The best thing you can teach Clara is how to handle and respond to failure which she will encounter more than she encounters anything else. If she can do that, the world will be hers.

Jeremy Jordan: Carry On premieres online Thursday May 6 at 8 PM ET & continues On Demand May 7 to June 17. Tickets are $35 with VIP tickets at $50 and can be purchased at www.54Below.com/Jeremy