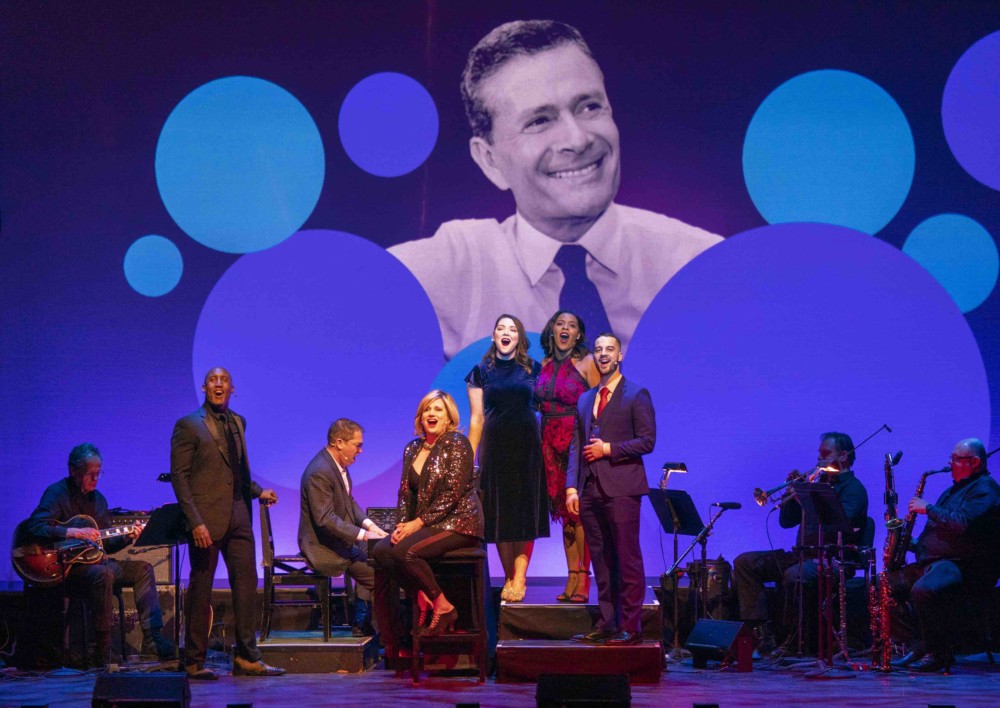 Since Jerry Herman passed away on December 26, 2019, I have attended many wonderful tributes for this legendary man of music who is considered one of Broadway’s greatest composer/lyricists. From Hello, Dolly! to Mame to La Cage aux Folles, no one has written “showtunes” with as much exuberance as Jerry Herman, whose joyful scores have sent us from the theater humming for more than 50 years. On February 22-24, 2020, the renowned 92Y’s Lyrics & Lyricists Series presented one of the most comprehensive, heartfelt, and remarkable tributes called Jerry Herman: You I Like.

What made this concert so special was the connection that the night’s musical director, Andy Einhorn, had with Herman: Einhorn served as conductor, musical director, and musical supervisor for the recent Tony-Award winning revival of Hello, Dolly! with Bette Midler and later Bernadette Peters. Andy not only conceived and music directed this tribute, but also was an extraordinary host as his admiration and passion for the man and the material was evident. He is quoted in the program as saying: “Jerry Herman was joy personified. He wrote shows that sparked joy, brought out positivity in the face of adversity, granted his characters second chances, and reinforced the love of family. He left a piece of himself in everything he wrote, and this program will celebrate these treasures.” 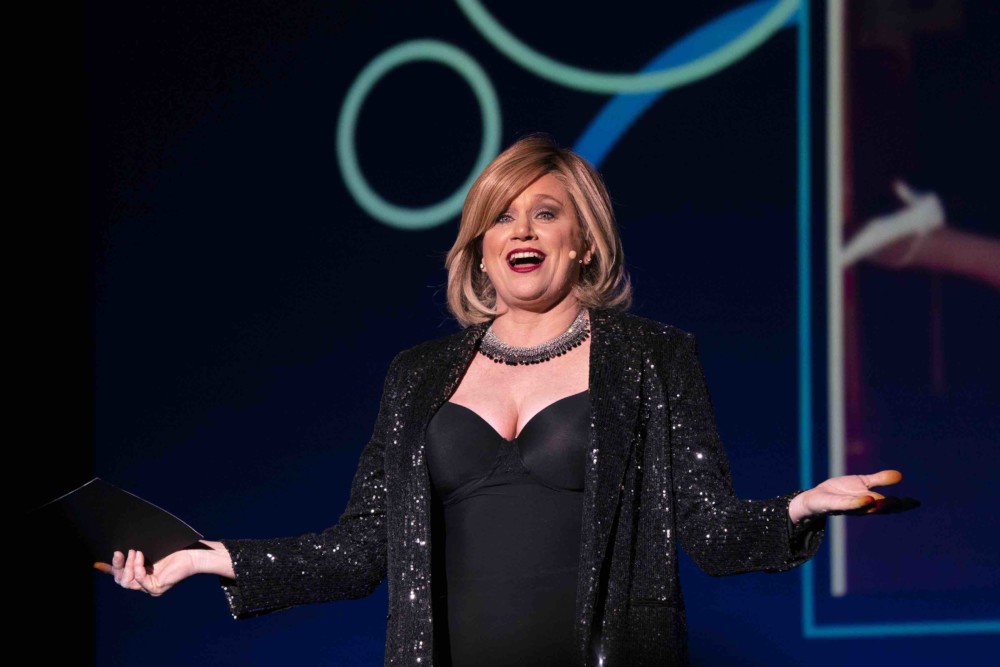 Cady Huffman, whose first Broadway role was in the original production of La Cage aux Folles, beautifully directed the proceedings and also joined a first rate cast that included Quentin Earl Darrington, Bryonha Marie Parham, Andrea Ross, and Ryan Vona. These fine vocalists were supported by lush orchestrations and arrangements— led by Einhorn— with Chad Smith on woodwinds, Jeremy Miloszewicz on trumpet, Scott Kuney on guitar, Mark Vanderpoel on bass, and Perry Cavari on drums. The lighting by John Kelly and sound design by Danny Erdberg was superb as well as the terrific projections by Dan Scully.

The concert opened with a glorious overture of Herman’s music that served as a prelude to the program and featured hand-picked songs from many of his remarkable shows. From Mame, Bryonha, Andrea, and Cady sang the exuberant “It’s Today,” and Bryonha and Andrea duetted on “Bosom Buddies.” Usually sung by a woman, Quentin’s “If He Walked Into My Life” was extremely moving, and Andrea knocked it out of the park as Mame’s pregnant protege in “Gooch’s Song.”

Of course, Hello Dolly! was represented: Cady sang “It Takes a Woman,” Ryan took a turn with both “Put On Your Sunday Clothes” and “Love, Look in my Window” (which was cut from the original show). The anthem to living life fully, “Before The Parade Passes By,” was well performed by Bryonha.

La Cage aux Folles was a groundbreaking show when it opened in 1983 and we heard Cady’s “Look Over There,” as well as a rousing “I Am What I Am” along with Quentin’s remarkable pantomime transformation in “A Little More Mascara.” 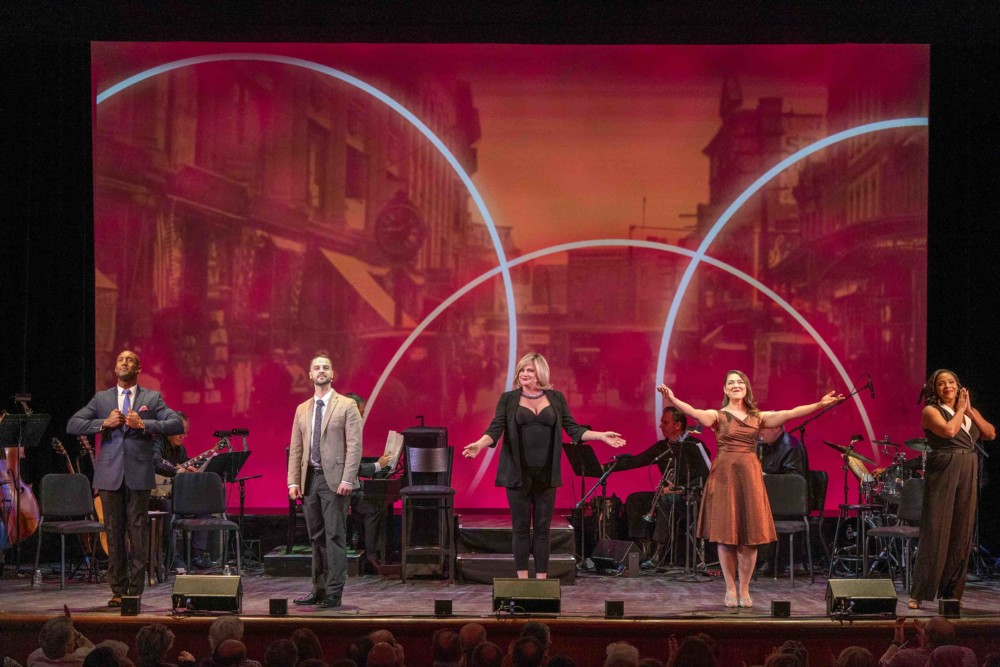 The Grand Tour opened in 1979 and the evening featured several songs from it, as Quenin opened with “I Belong Here,” Ryan sang “You I Like,” and Bryonha took on the lovely “Marianne.” There were just so many highlights in this tribute, such as when Bryonha sang “Shalom” from Milk and Honey (1961) and when the company performed “Time Heals Everything” and “I Won’t Send Roses” from Mack & Mabel. A thrilling medley featured the pairing of “It Only Takes a Moment” from Hello, Dolly! with “Let’s Not Waste a Moment” from Milk and Honey— sung by Andrea— as well as Ryan’s great rendition of “I Don’t Want To Know” from Dear World.

As the show came to and end, we saw a film clip of Jerry on the screen singing “I’ll Be Here Tomorrow” from The Grand Tour as the entire cast joined in the song. There is no doubt that the songs of Jerry Herman will be here for many tomorrows, as his legacy is like no other and his contribution to musical theater is extraordinary and singular.  The audience all joined in singing “The Best of Times” (La Cage aux Folles) as we saw Jerry’s lyrics on the screen telling to “hold this moment fast and live and love as hard as you know how, because the best of times are NOW!”

Part of the Lyrics & Lyricists Series at 92Y