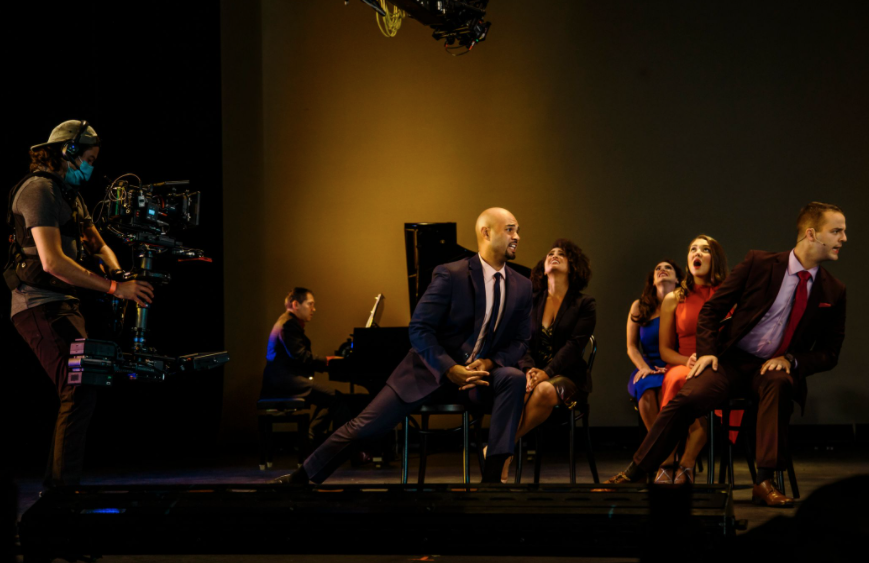 There can never be too much of Jerry Herman – composer/lyricist of the Golden Age of Broadway Musicals, the good old fashioned showtunes! Sadly he left us just last year in December at the age of 88 but his legacy of the grandeur of musicals – – Hello, Dolly!, Mame, LaCage aux Folles, will live on forever. His off- Broadway wonder Mack and Mabel along with other not-as-well- known musicals like Dear World (for which he wrote lyrics), Milk and Honey and Parade, each produced memorable songs of comedy and sentimentality.

BIG congratulations to Andy Einhorn (musical director/supervisor Broadway’s Hello, Dolly!) who conceived and musically directs You I Like: A Musical Celebration of Jerry Herman, directed by Mark Ciglar (Producing Artistic Director Danny Feldman). The production is a fund-raiser streaming event thru February 7 on the PasadenaPlayhouseLive platform.

The cast is flawless!

There’s no doubt about Jerry Herman spreading love and optimism in his positive, uplifting music as Andy Einhorn provides insightful history and comments. But the piece de resistance is being an audience member for approximately one hour and 45 minutes and hearing 25+ songs of the best music ever written.

Too numerous to mention, here are some highlights: Lesli Margherita and Andrea Ross “Bosom Buddies”(Mame); Lesli Margherita “Look Over There,” “I Am What I Am” (La Cage); Ryan Vona “Confession to a Park Avenue Mother” (Parade), “Put On Your Sunday Clothes” (Hello,Dolly!), “I Don’t Want to Know” (Dear World); Leslie, Andrea, Ashley “It’s Today” (Mame) – spectacular harmonies; Ashley Blanchet “Gooch’s Song” (Mame), including big belly; Nicholas Christopher “If He Walked Into My Life” (Mame) and “Movies Were Movies” (Mack and Mabel); Andrea Ross “Time Heals Everything” (Mack and Mabel) segueing to Nicholas Christopher “I Won’t Send Roses” (Mame); Andy Einhorn’s arrangement for Ashley Blanchet “It Only Takes a Moment”/Let’s Not Waste a Moment” (Hello, Dolly!/Milk and Honey); Andrea Ross’ memorable “Before The Parade Passes By” (Hello, Dolly!) and “You I Like” (Andy Einhorn, Ryan Vona, Nicholas Christopher).

Without a doubt “The Best of Times” (La Cage) has become an anthem that fittingly closed the show with the entire cast. Sadly, Jerry Herman vowed, after writing La Cage aux Folles, never to write another Broadway musical.

The exceptional production values of the video are the work of Nathaniel Peterson. In the opening night chat were some of Broadway’s best including Donna Murphy, Jerry Zaks, Laura Osnes each lauding this tribute and the marvelous singers.

You’ll be thrilled to see this and happy to help the PasadenaPlayhouseLive available thru February 7.