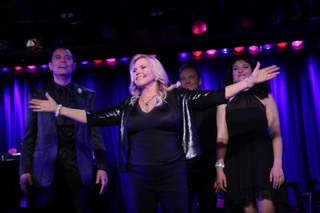 Led by actress/singer Jill Senter and featuring Rob Langeder, Lyle Smith Mitchell and Sophia Tzougros, Celebrate the Moment is a revue, an honest-to-god revue. It features singing, dancing, and rousing musical arrangements. And most importantly it features an ebullient ensemble so in sync with each other and yet so individually defined that the evening is constantly surprising and entertaining.

They open with “New York Medley” which manages to incorporate ten composers and lyricists in three minutes, and continue the upbeat through “Fly Me to the Moon” ( Howard) and “I Feel the Earth Move” (King). Jill introduces her own song “Celebrate the Moment” and then speaks lovingly about her uncle David Kapralik who was the head of Columbia records in the 60s and a songwriter as well. The ensemble then performs some of his songs in “The Hits of David Kapralik” medley. They’re pretty impressive hits: “I’m Everyday People”, “Dance to the Music” and “Ride Sally Ride,” for example. It was a fitting tribute.

Jill sang a medley dedicated to her son, “Day by Day” and It’s a Wonderful World.” (Schwartz/Thiele,Weiss). Throughout the evening you root for Jill, she’s the kind of presence that encourages simpatico and optimism. 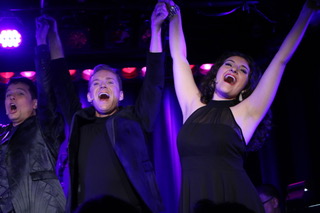 The first solo was Sophia Tzougros’s haunting rendition of “Starting Here, Starting Now,” (Maltby Jr/Shire) followed by Rob Langeder creating an entire world with his strong, gorgeous performance of “Anyplace I Hang My Hat Is Home/Who Says You Can’t Go Home?” (Arlen/Mercer; Sambora/Bon Jovie). Lyle Smith Mitchell then took the stunning risk of singing Lady Gaga’s “I’ll Never Love Again” from the movie A Star is Born and took it totally for his own brilliant performance.

Jill and trio got back on board for “Summertime,” (Gershwin) and “You Gotta Taste All the Fruit.” (Fain/Bergman). Rob gracefully charmed Sophia with “On the Street Where You Live” (Lerner/Loewe) and Sophia picked up the next moment with an emotional outpouring of “Losing My Mind” (Sondheim);  Lyle broke out of it all with “I Will Survive” (Perren/Felaris). The evening came to a close with Jill Senter’s inspiring original song “Stronger,” a beautiful solo moment with Jill simply and beautifully performing “Moon River” (Mancini/Mercer) and a group finale of “Disco Medley” with fun and beat abounding. 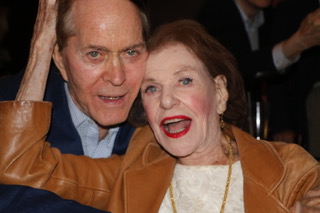 Steve Ross and Joan Copeland at the show

The solid cohesiveness of this evening is only possible if the Director and the creative Musical Director are not only gifted but in sync. Director Walter Willison and writer, arranger and conductor Elliot Finkel have together chosen and crafted the material so well that it flows from moment to moment to maximum effect; and they have clearly worked well with the performers to communicate their vision for the show. This is a very professional show with a lot of heart and soul. And, you have to add more kudos to a great band that supported and added excitement to every moment: Marty Fischer (drums, contractor), Ken Rizzo (bass), Robby Kirchhoff (guitar), Dan Rosengard (sinth), Ralph Olsen (reed 1),Spencer Bruno (reed 2) and Larissa Blitz (violin).