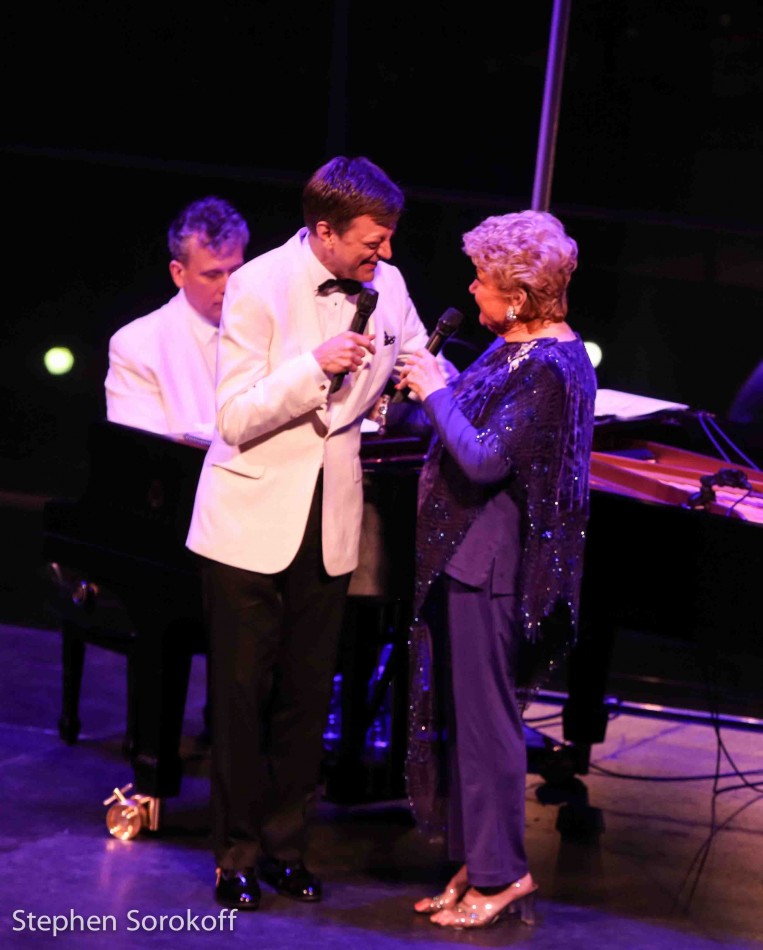 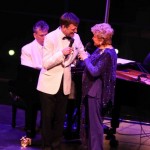 New York City residents know one of the great places to take out-of-towners is Jim Caruso’s Cast Party Monday nights at Birdland, an open mic event that attracts major Broadway and cabaret stars as well as some “others” as Caruso phrases it.  There is a great house band often led by Billy Stritch and it’s always a fun evening.  Lincoln Center’s American Songbook series invited Caruso to bring Cast Party to the Allen Room and the result was “Jim Caruso’s Cast Party Goes to the Movies, with Billy Stritch” on March 7. 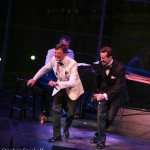 While the lights were still up, Jeffry Denman appeared on the stage and started a tap dance to  the rhythm of “Hooray For Hollywood” as, one by one, the members of the great band appeared:  drummer Daniel Glass, bassist David Katzenberg, and Billy Stritch, musical director on piano, and Caruso himself.  Right away there was an exuberant “When There’s A Shine On Your Shoes” performed by Caruso and Denman!  Then Caruso explained the history of Cast Party saying he had invited some of his most frequent participants this evening.  They were Christina Bianco, Denman, Natalie Douglas, Marilyn Maye, Jane Monheit, and Clarke Thorell.  Throughout the evening Stritch and the band were flawless!

The whole evening was exhilarating, every performance a knock out, but there were some very special star turns.  Among them were Thorell’s resonant voice singing Disney songs “Whistle While You Work’ and “Give A Little Whistle” (while he whistled), and a sumptuous duet with Bianco on the first Academy Award winning song, “When You Wish Upon A Star.”  Bianco followed that with a special “Ladies in the Movies” medley using her extraordinary range to run the gamut and to present spot-on impersonations of Julie Andrews, Idina Menzel, Marilyn Monroe, Streisand, Shirley Bassey, Adele and Celine Dion. 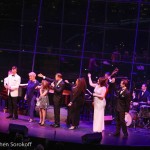 Natalie Douglas saluted her idol Lena Horne.  The 1943 movie,“Stormy Weather,” she said was loosely based upon the life of Adelaide Hall.  Douglas’ “Stormy Weather” was rueful first but then she belted the second chorus with the trio going full blast!  Later she saluted Peggy Lee by rocking “He’s A Tramp,” with the band doing the dog howls!

The most amazing part of the evening was Caruso and Denman, saluting the Arthur Freed unit at MGM, doing “I Guess I’ll Have To Change My Plan” from “The Bandwagon.”  It was a perfectly synchronized number without a single mis-step as they danced side by side, back to back, face to face – pure joy!  Immediately after that tour de force, Caruso demonstrated another aspect of his talent by singing one of his early audition songs, slowly and plaintively, “If I Only Had A Brain.”

There were several selections from Harold Arlen-Ira Gershwin’s score for Judy Garland’s “A Star Is Born.’  Stritch led Monheit, Caruso, and Thorell in a great rendition of the “Gotta Have Me Go With You” and also did the entire “Lose That Long Face,” which was awesome.  And the amazing Marilyn Maye, elegantly entered beginning with the lyric “Good riddance, good bye” singing an exceptionally brilliant “The Man That Got Away” to cheers.

Staying on the stage, Maye did her wonderful “Rainbow” medley:  “Look To The Rainbow,” “Over the Rainbow,” “Make Me Rainbows,” and “The Rainbow Connection.”  Maye has done this medley many times in her acts but this night was exceptionally special, especially “Over the Rainbow” which was different from Garland’s but completely captured the hope in the lyrics with extraordinary phrasing and choices.

What could possibly close such an exciting evening?  The entire cast singing very special lyrics to Bob Hope’s signature song “Thanks For the Memory.”  Lined up on the stage, one by one, two by two, they sang in honor of the night, and it was the perfect finale.  Congratulations to Lincoln Center’s American Songbook for presenting Jim Caruso’s Cast Party in the American Songbook series. www.jalc.org   www.americansongbook.org 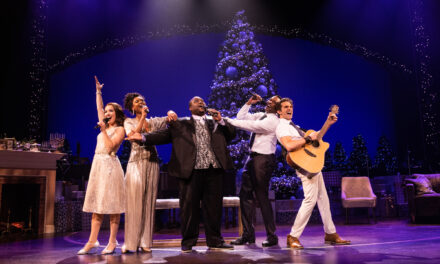 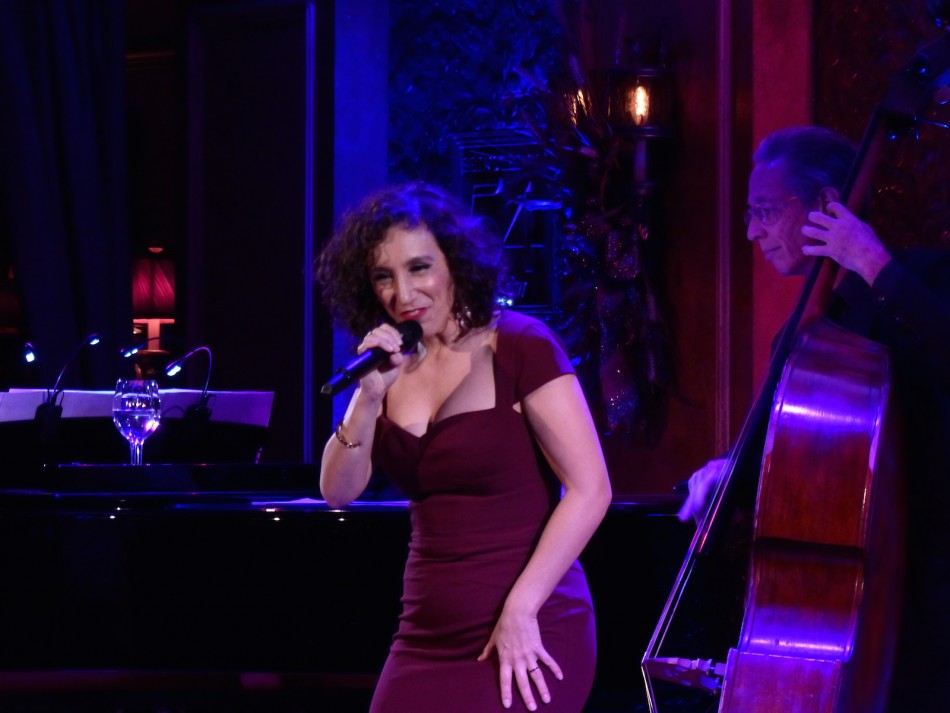 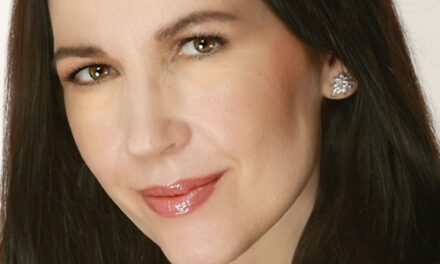 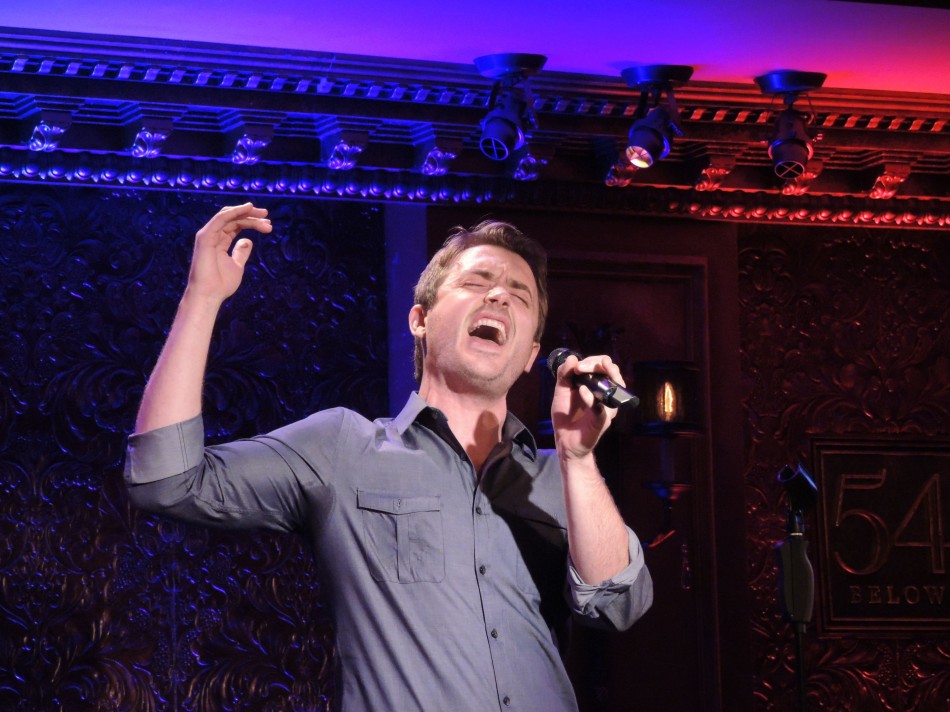