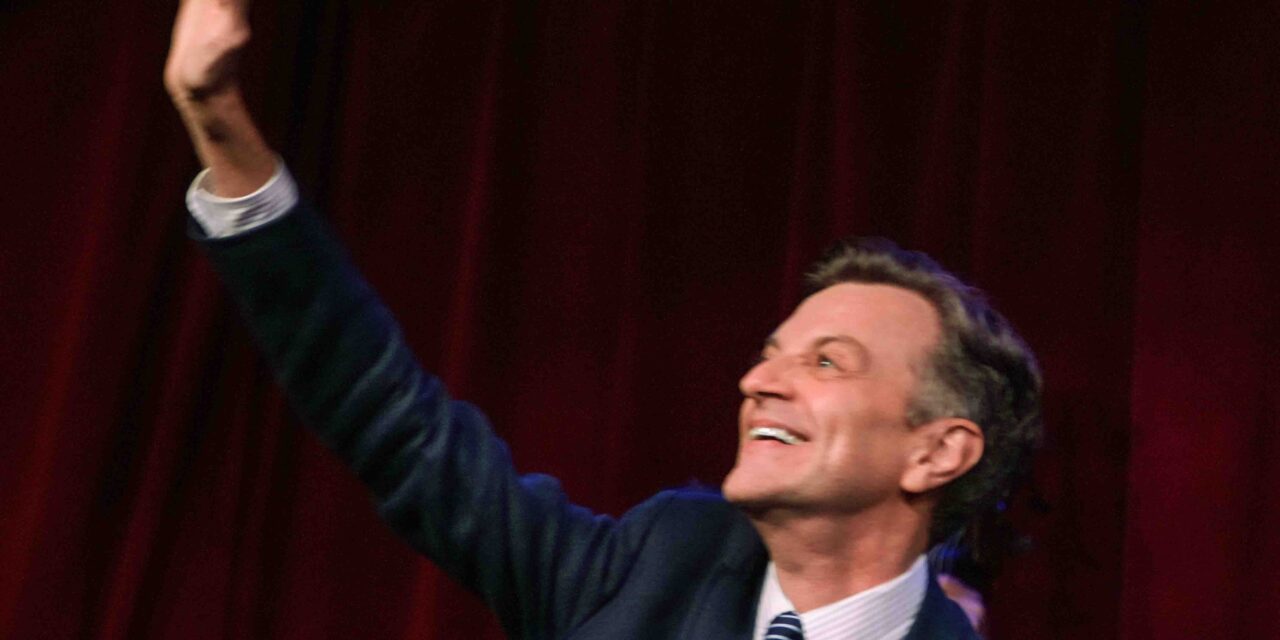 Birdland is not only home to some of the greatest jazz performers.  The venue also hosts Jim Caruso’s Cast Party every Monday night, which the show’s quite website accurately describes as “a hilariously impromptu open mic/variety show where showbiz superstars and up-and-comers deliver jaw-dropping musical performances and razzle-dazzle.”  The anniversary event celebrated 19 years, most of them at Birdland.  It was an entirely full house, and for the first time was live-streamed, with excellent video and sound quality.

Featuring Daniel Glass on drums, Steve Doyle on bass, and the “nine fingers of Billy Stritch,” Billy opened with a torchy “Teach Me Tonight” (Gene de Paul/Sammy Cahn) before host Jim Caruso joined in for “We’ve Got Elegance” (from Hello Dolly) with special lyrics for a Cast Party theme song.  The funny, seemingly never-aging Caruso has a droll demeanor and exceptionally quick wit.  This edition was really a “closed mic,” with a long list of preselected Cast Party favorites, new talent, and a big surprise.  The performers ranged from good to spectacular, with far too many to cover in this space.  Here are some highlights.

Singer Natalie Douglas, a popular fixture at Birdland for many years, was the first performer up, with a peppy “Love for Sale” (Cole Porter).  She has performed regularly at Cast Party since 2003.

Jonathan Hoover, an Internet sensation for his hilarious Patti LuPone impression and his “Inappropriate Patti” Instagram account, killed with the “missed opportunity” of Patti singing “Don’t Rain on My Parade” from Funny Girl.

Surprise guest Julie Benko was quite the gift.  Ms. Benko, Beanie Feldstein’s understudy for Fanny Brice in Funny Girl, recently had something of a “Shirley MacLaine” career jump thanks to many opportunities to play the role.  She will take over the part in August, though she joked that Jonathan Hoover should get the nod.  Contractually prohibited from singing songs from the score, she blew the house away with another Fanny Brice tune, “Second Hand Rose.”  Husband Jason Yeager accompanied the rising star, while John Manzari, currently in the Funny Girl ensemble, tap danced his way through the break and to the end of the song.  Ms. Benko and Mr. Yeager have a show at Birdland, one night only, on August 29th.

Sharon McNight, a cabaret icon, did a risqué, burlesque-type song, “Everybody’s Girl” (John Kander/Fred Ebb) from Steel Pier.  Her delivery is priceless, getting big laughs with lines like “You know, the other day, I was walking across the cow pasture.  I was so tired …. I ran.”  Hysterical!

The amazing Susie Mosher created an entirely improvised, stream-of-consciousness song as only she can.  Susie runs “The Lineup with Susie Mosher” every Tuesday night downstairs at Birdland Theater.  A more curated version of Cast Party, the show has performers booked weeks or months in advance.

Singer, songwriter and pianist Nicole Zuraitis, with her gorgeous and sultry voice, sang “Do I Move You?” a Nina Simone blues song.  The answer to that musical question is a big yes!

Gabrielle Stravelli, another Birdland favorite and a spectacular jazz singer, sang “The More I See You,” with husband Pat O’Leary taking over the bass.  She and Billy Stritch traded scats and harmonies towards the end of the number, giving it something of a “Jackie and Roy” vibe.

The wonderful Marta Sanders, an old-school entertainer with a big voice, who brings to mind the late Rose-Marie, sang “Panache.”  She warned Jim, “It’s gonna build.  Then we’re gonna strip it.  Strip it, baby!”  She’s funny, with enough presence for two stages.

Two tap dancers in one night!  Rick Hinkson brought out the red tap board for Luke Hawkins, a tall, handsome Broadway dancer and choreographer.  Luke and Billy did an unrehearsed but terrific medley of songs from Singing in the Rain, singing “whatever lyrics I can remember,” with vocal help from Billy, but the dancing was the lucky star here.  Luke did a “call and response” of his happy feet and Daniel Glass’s drums.  Bravo!

Aussie jazz pianist and music director Matt Baker, an equally fine photographer, played a fast, swinging arrangement of “Cheek to Cheek” (Irving Berlin).  It’s been a joy hearing Matt’s skills grow over the years, and his voicings are just brilliant.

Prodigious singer-songwriter Christine Lavin, a Cast Party favorite, appeared in her trademark pigtails and granny glasses and a pair of light-up batons in lieu of her usual guitar.  She announced a reading of a musical based on her songs at the York Theatre.  “I’m 70 years old and I’ve been a folk singer all my life and now, suddenly, the doors are opening!”  Her repartee with Jim about “Men’s Night” at a yarn store was so much fun.  “Can we all go to Knitty City?”  Her piece, part comedy rap and partly sung, “What gets a man really all aglow?  The Victoria Secret fashion show!”  Her lyrics are funny and clever, and her timing impeccable.  Mid-song, Christine called up the statuesque singer Ann Kittredge to “show them how women walk in high heels.”  “Yeah, women walk, but can they do this?” At that, Christine twirled her batons like a cheerleader.  She is a hoot!