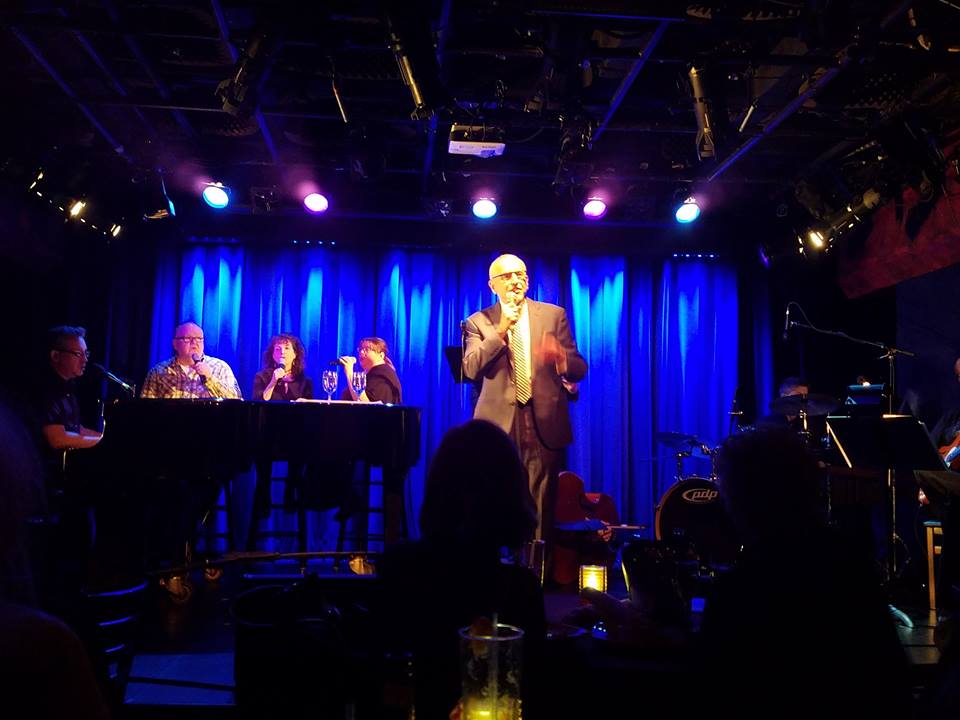 Jim Speake, who just won the LaMott Friedman Award at the MAC Awards this year for his recording of “Sweet Life The Show” chose to do a show celebrating this win at the Laurie Beechman Theatre on April 12 with the full complement of the musicians and singers who supported him on the album. It was a very special night under the direction of Lennie Watts and the music direction of Steven Ray Watkins and the band included Watkins on piano, Donna Kelly on drums and percussion, Matt Scharfglass on bass, Peter Calo on guitar and backup vocals by Rachel Hauser, Karen Mack, and Watts. All these names are familiar to cabaret fans, and the sold out house was full of other singers and songwriters. Most of the songs were developed in his participation in workshops conducted by Watts and Watkins.

The album and the show included several songs by Cy Coleman. One of the most moving was the one he wrote with Carolyn Leigh “It Amazes Me,” sung with a great feeling of discovery. Later on in the show, he did the wonderful “Colors of My Life” with lyrics by Michael Stewart, from Pocahontas.

Speake told of growing up in Mississippi and how popular he was when he got his first car, a red Corvette convertible, and  was able to take all his friends to the drive in movies. The song he sang to describe this was Messina and Loggins “Your Mama Don’t Dance,” and it was rocked by his band and the vocalists. One of his great rarities was “Not The Boy Next Door,” the song Peter Allen wrote with Dean Pitchfork, sung as a heart-rending ballad.

Speake told us of wanting to find the music for a song Neal Sedaka had featured on one of his LPs. Kim Grogg was a connection to Sedaka and Sedaka not only sent him his music, but it was full of personal notations and instructions signed by him! The song was “A Lonely Christmas in New York,” and was full of New York lyrics about how specific Christmas is in this City. It was a thrill to hear this rarity and the song obviously meant a lot to Speake from the way he sang it.

Speake’s Sondheim song was the one from Dick Tracy that Madonna sang, “Back In Business” with full vocal complement by his singers!

Speake announced before his closing number and Thank You’s that purchases of his CD would benefit Broadway Cares Equity Fights AIDS. Then his final number, after acknowledging everyone at the Laurie Beechman, was the wonderful farewell anthem, “Here’s To Life,” (Artie Butler/Phyllis Molinary.) Many cabaret singers sing this song but Speake’s performance was a standout.

Lennie Watts was the Artistic Director of the CD. Paul Rolnick was the mix engineer and additional vocal engineer.

The recording is available on CDBaby.com and iTunes. Speake’s website is www.jimspeake.com