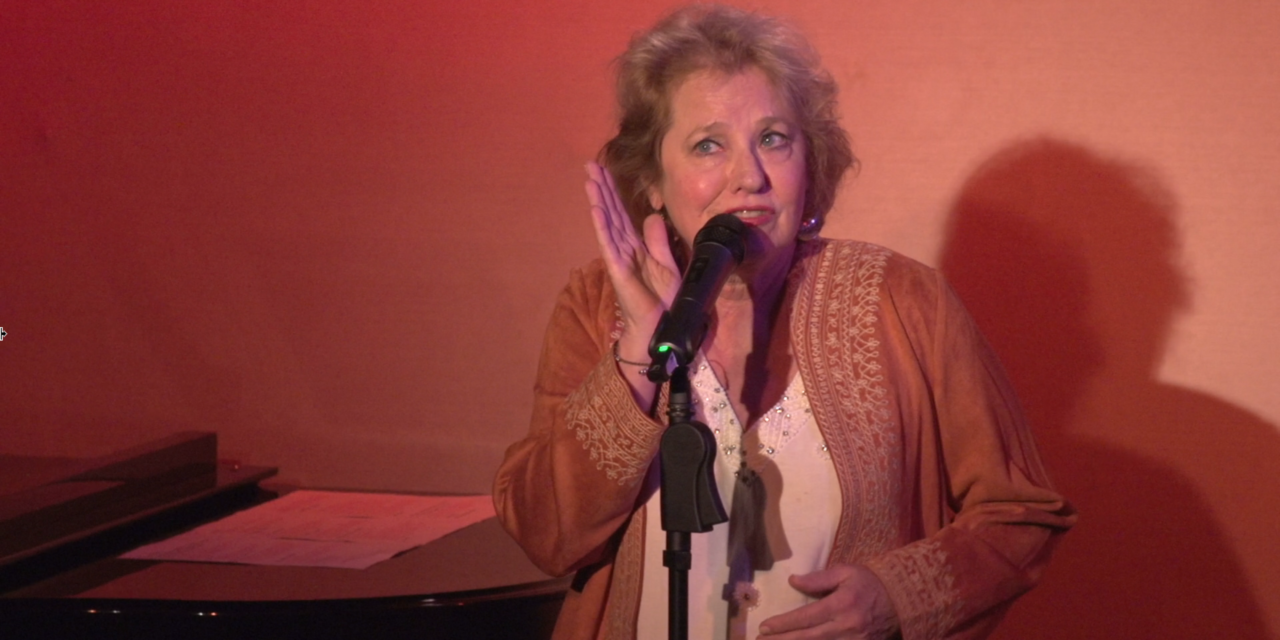 Remember those 60’s shows like Hullabaloo! and Shindig! that had exclamation marks as part of their titles?  Well, Jo Brisbane does!  This Kansas City writer and performer’s Mod Hollywood! sold out in its summer debut at The Provincetown CabaretFest.  The show is a campy romp through movies songs from the 1950s and 1960s.  With the help of director Lennie Watts and music director and accompanist Tracy Stark, Ms. Brisbane presented a fun Saturday afternoon show at Don’t Tell Mama to a full house of adoring fans and friends in the Brick Room.  Some folks, like the lovely couple seated next to me, traveled from Kansas City for this show.

Ms. Brisbane came to the stage dressed in a long copper and gold jacket over a cream-colored blouse, all of which beautifully complemented her hair and skin tone.  A small Oscar replica stood guard on the piano.  She is a comedic performer who can carry a tune, and it is her timing and mimicry that are her strongest suits, which skills she used to her advantage throughout the show.  Ms. Brisbane’s sincerity and delivery are effective, making up for some intonation challenges on the handful of “straight” songs.

The opening number, “Que Sera, Sera” (from The Man Who Knew Too Much), was initially sung straight, before Ms. Brisbane affected various character voices.  She followed with the bluesy title song, “Town Without Pity,” the Gene Vincent hit from the movie of the same name.

There were stories and anecdotes for every song, most of which Ms. Brisbane performed with humor or camp.  Several, including “Alfie” and “Charade,” were performed entirely straight.  She spoke of actor Steve McQueen as a “rockabilly wannabe” ex-con seen lip syncing Glenn Yarbrough’s vocal of “Baby the Rain Must Fall.”  Tracy Stark contributed harmony on the choruses.  Ms. Brisbane is at her most appealing in numbers like these, where she is playful, cute and funny.

Ms. Brisbane’s terrific “Beach Movie Medley” introduced funny bits of familiar character tropes to songs like “Beach Party Tonight” and “Where the Boys Are.”  Ramping up the humor, Ms. Brisbane showed off her physical comedy skills when gamely climbing onto the piano for “What’s New, Pussycat!” where singer and pianist traded meows throughout the song.

The familiar melody of the title theme to the French film “A Man and A Woman” (with altered lyrics by Jo Brisbane) somehow led the singer into various jokes about the retired actress and singer Claudine Longet and her accidental shooting of boyfriend, ski legend Spider Sabich, for which she received a minimal sentence.  “Perhaps because I’m French.  I’m beautiful, and I’m French.”  This number was laugh-out-loud funny.

The biggest highlight was Ms. Brisbane’s performance of the rarely performed title song to Hush… Hush, Sweet Charlotte.  Her sweet and tender rendition ultimately matched the insanity of Bette Davis’s character in the film, in an over-the-top moment when Ms. Brisbane bared a giant cleaver, approaching Ms. Stark in mock anger and “chopping off” her hand.  She held up the “bloody” rubber hand with a wild-eyed look, while Ms. Stark held out her seemingly hand-free arm.

A diverse set of songs closed the show, including a fun “Trouble” (mimicking Elvis but not impersonating him), and a strong “Goldfinger.” Jo Brisbane’s Mod Hollywood! (don’t forget that exclamation mark!) is a fun show that will entertain you and leave you laughing.

Jo Brisbane’s Mod Hollywood! Tunes from a Town Without Pity was performed on November 5 at Don’t Tell Mama.