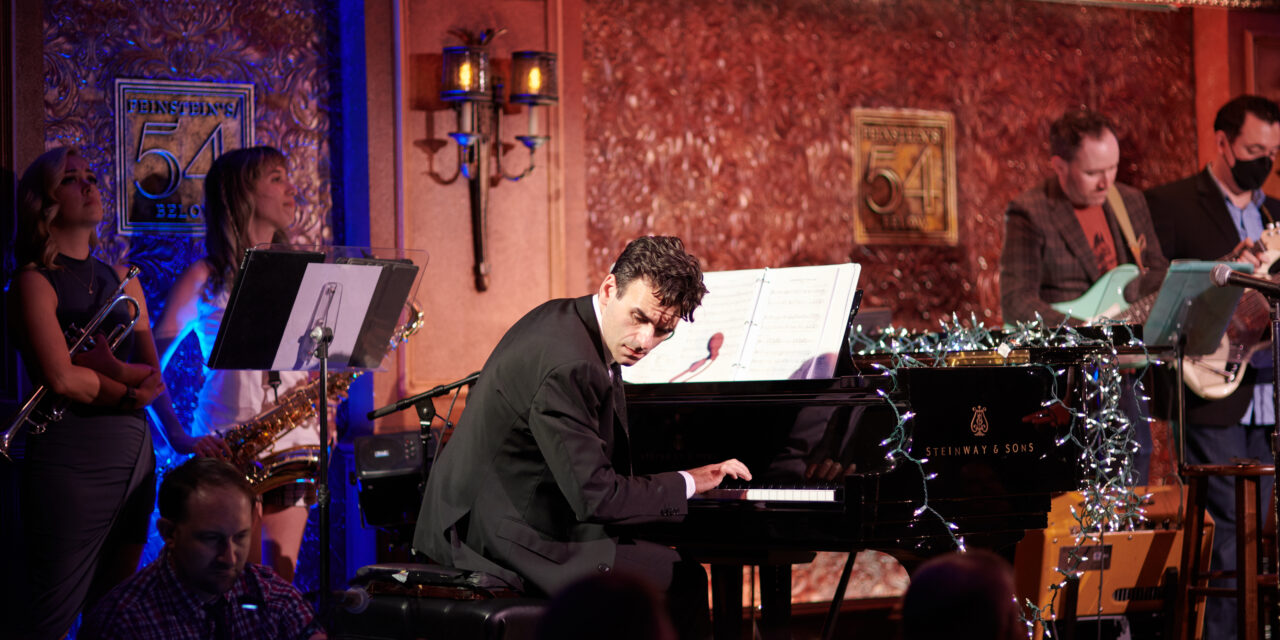 Joe Iconis is a prodigious songwriter and playwright primarily known for his successful, campy musical plays, notably Be More Chill, and funny, if not silly, story-based songs.  For many years, his sprawling, joyous “Joe Iconis and Family” shows at 54 Below have utilized his “family” of performers from his shows, as well as his wife, Lauren Marcus.  His new, epic album, called simply “Album,” contains 44 of his original songs.  At 54 Below on July 11, the final performance of a four-night run, Joe’s “Rogues Gallery” performed 14 of them.

A major challenge for this performance was the latest Covid wave, which had several performers and musicians drop out over the run, at least one only hours before showtime.  This led to some creative last-minute changes, including having a friend who “sort of” plays trumpet join in for an important part, and substituting several songs not originally planned for the evening.

Mr. Iconis, an accomplished pianist, accompanied the band on all songs.  He told stories of his life and songs.  You might not expect, from his description of his young self, the man you see today.  The tall, handsome Iconis, with a shock of black hair and a Superman spit curl, is a joy to watch.  He is quite animated, reveling in the performances of his creations.  If these songs are his babies, he is clearly proud of his “babysitters.”  He opened the show solo with the eponymous “Album,” which he also sang, before the band and cast members joined in.

“I hung my Barbie with wire
Then I set her hair on fire
Hey, she looked better that way.”

“My Best Friend’s a Skeleton” (Eric William Morris and Jeremy Morse) was an unplanned and unrehearsed addition to the evening, which Mr. Morse hadn’t performed for eight years.  With Mr. Morse in a full-body skeleton suit, this wonderfully silly number killed, so to speak, and brought the house down.

“Haddonfield, 15 Years Later,” written for the television show Smash, never made it to the air.  It is a sweet, poignant song that Jared Weiss performed beautifully.  “Find the Bastard” (from Bloodsong of Love, here featuring Eric William Morris), a song of revenge against the man who stole the singer’s wife, brought out the entire ensemble.

“The Goodbye Song” (from Two-Player Game) is a gorgeous ballad written for Joe’s late brother, who died of cancer.  Jason SweetTooth Williams rendered it passionately and emotionally.  The ensemble returned to end this song and the show.

George Harrison famously said of the ukulele, “You can’t play it and not laugh!”  The same could be said of Joe Iconis songs.  An evening of “Joe Iconis & Friends” will leave you positively giddy.