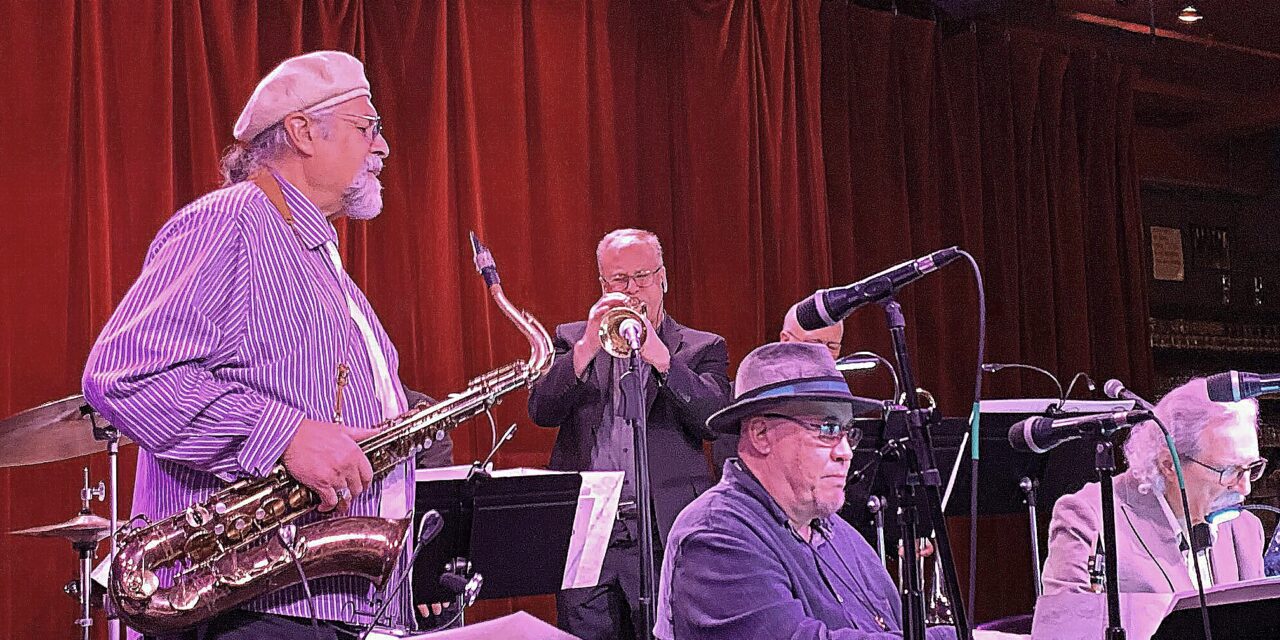 The set consisted largely of long-form arrangements of his original material and Tadd Dameron classics, with Lovano and his superb rhythm section providing the power driving the arrangements, with ample room for all the cats to play.  Drummer Otis Brown III was on fire throughout.  He, pianist James Weidman and bassist Cameron Brown seemed to be having the time of their lives, and their musical chemistry with Lovano was palpable.

The soft-spoken Lovano – his sax does most of his speaking – was dressed in a periwinkle and white shirt, casually tied white tie, and a beige beret, his gray ponytail tied behind it. The band opened “On a Misty Night” (by Tadd Dameron, introduced by John Coltrane in 1957) from Lovano’s 52nd Street Themes album, which garnered a Grammy in 2000.  (He has an additional 13 Grammy nominations.) With Cameron Brown’s pulsating bass line and a double-time rhythm, the band was off to the races, with the saxes and trombone trading fours, with especially tasty licks by tenor Ralph Lalama.  “Misty Night” was an exhilarating number from its hot start to the perfectly executed crescendo-decrescendo finish.

Lovano barely slowed it down for a swinging “If You Could See Me Now,” another Tadd Dameron composition from the same album and an early signature song for Sarah Vaughn.  The star played a long, provocative section entirely solo, before the lush ending by the ensemble.

Arranger and composer Tadd Dameron, in his brief 48 years, was one of the biggest contributions to bebop in particular, and was well represented in this set.  Dameron’s “Mating Call,” from the album of the same name with Coltrane, featured a long, wild drum solo by Otis Brown III before Lovano came in free form.  There was something almost tribal here, with leader Lovano wordlessly leading his men into musical battle with a call and response, deftly using only riffs and silent signals.

Lovano turned to his own material with “Cool.”  This was his most melodic piece to date, played in what might be described as a “saunter” pace.  The players traded a series of two-bar phrases that were a wonder to behold, with the alto players swapping their saxes for flute and clarinet, and an extensive bass solo by Cameron Brown.  The melodic denouement brought the piece to a rather satisfying conclusion.

The arrangement for the Thelonious Monk tune “Ask Me Now” seemed to have shades of Ellington, with a melody so familiar, that song you’ve heard before but can’t quite place.  (Perhaps because the song had a second life fasciotomy, “How I Wish,” with lyrics by Jon Hendricks, recorded by Carmen McCrae.)

The set concluded with “Deal” (Willie “Face” Smith”), also from 52nd Street Themes.  The fast blues was a showcase for Lovano, Weidman and Scott Wendholdt on trumpet, and was the icing on the musical birthday cake for this celebrated artist.