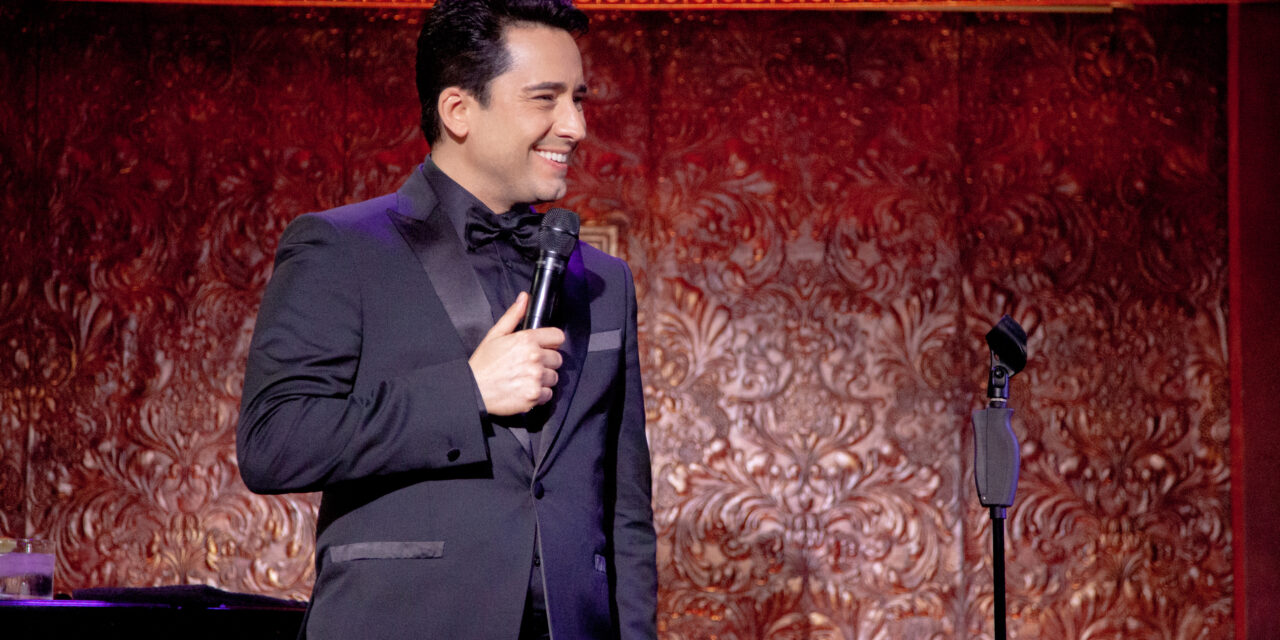 John Lloyd Young is a dynamic entertainer and actor.  The Tony and Grammy winner is also a multi-Platinum recording artist.  Best known for his portrayal of Frankie Valli in Jersey Boys on both stage and screen, he has a powerful bari-tenor voice and a killer falsetto.  The handsome young star has a huge, loyal following, yet his air of accessibility makes him feel almost like a friend.

In the first set of a nearly week-long residency at 54 Below, the star performed a variety of vintage soul and pop hits, a few songs associated with Franki Valli, and one of his own original tunes, which the sold-out crowd of devoted fans who came from far and wide to sees him – one couple came all the way from the UK! — ate up.  He also had a large livestream audience.

Mr. Young was accompanied solely on piano by the brilliant music director, vocalist and composer Tommy Faragher, who opened the show solo with the Ray Charles’ hit, “What’d I Say.”  Mr. Faragher lent his own strong, bluesy voice to harmonize with the star on several songs in the set.  He was terrific on a solo medley mid-show.

The handsome star entered the stage wearing dark shades, with an all-black ensemble of a tuxedo jacket and bowtie, dress shirt and jeans, along with a million-watt smile, the combination of which gave him something of a Tom Cruise vibe.  He opened with a strong medley of “So Amazing” (Luther Vandross/Marcus Miller) and “Sweet Love” (Lionel Richie), followed by a soulful rendition of The Platters’ hit ”My Prayer” that sent shivers down the spine.

Mr. Young’s rendition of “Hurt” (Jimmie Crane/Al Jacobs) was inspired by the Little Anthony and the Imperials recording, but his booming voice and interpretive skills gave it a power closer to Elvis Presley’s 1976 recording.

When he performed the Mel Carter hit “Hold Me Thrill Me Kiss Me” (Harry Noble”), he worked the room like a singing mayor, going from table to table, sometimes getting on a knee to serenade the women (leaving behind nothing but puddles with glasses and pocketbooks where these women sat), and shaking hands with the men.  (He has a firm grip.)

Mr. Young sang a song composed by Tommy Faragher, for which he wrote the lyrics.  (The title was not announced and was omitted from the press set list, but appears to be called “Don’t Be Afraid.”)  It was a good, poppy song, and would bode well for a songwriting partnership between the two.

The star’s patter throughout was filled with delightful behind-the-scenes stories and some impressive name dropping, sometimes of stars who have written songs for him, sounding as excited to mention the names (“We’re now friends!”) as it was for the audience to hear them.  He brought you in front of the camera with him as he described how it felt to be directed by the legendary Clint Eastwood in Jersey Boys.  His “chipmunk” story involving Eastwood was hilarious.

In an evening of many highlights, perhaps the most surprising was his stunning take on the oldest song in his repertoire, the 1929 Tin Pan Alley tune “Mean to Me” (Fred E. Ahlert/Roy Turk).  Performed as a slow and torchy blues, using his falsetto, it was heavily influenced by Nell Carter’s arrangement from Ain’t Misbehavin’.  Clearly,Mr. Young can kill with material from the Great American Songbook.

Mr. Young’s renditions of Jersey Boys songs were reason enough to love the show.  This set included “Can’t Take My Eyes Off of You” (Bob Crew/Bob Gaudio) and “My Eyes Adored You” (Bob Crewe/Kenny Nolan), along with two encore songs, “Working My Way Back to You” (Denny Randell/Sandy Linzer) and “Sherry” (Bob Gaudio), with the latter getting tremendous audience support in the form of claps and a singalong.

Photos (except as noted): Stephen Mosher