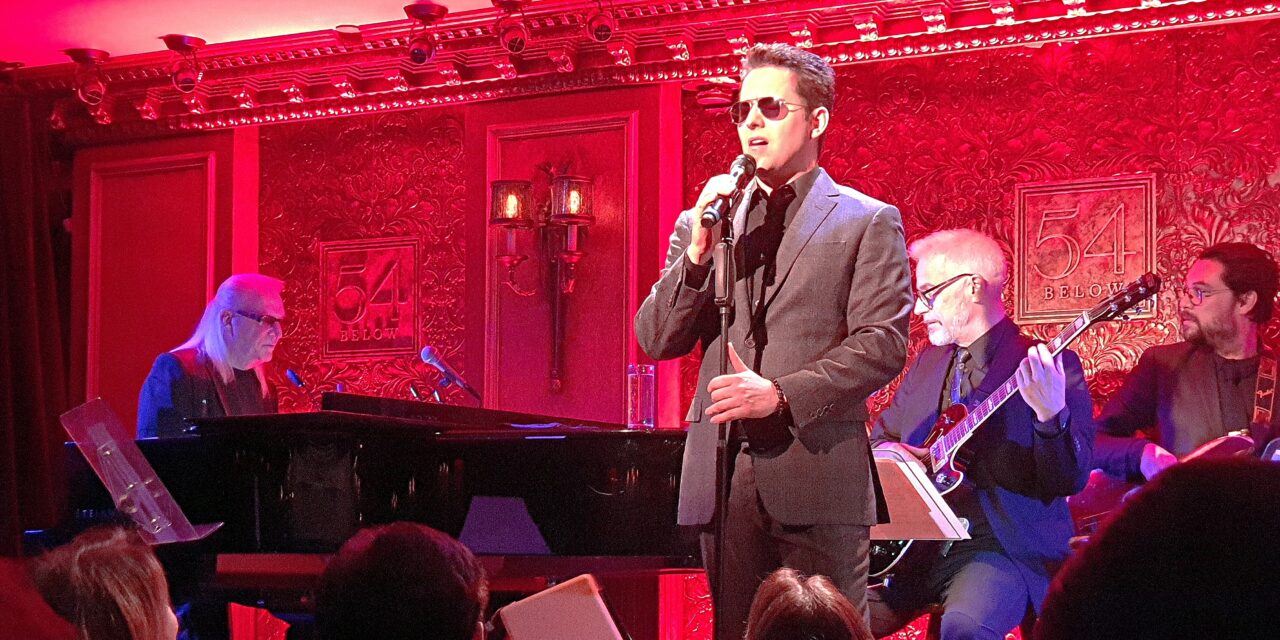 Broadway, film and pop star John Lloyd Young returned to 54 Below for a four-night residency, with a livestreamed final performance.  The Jersey Boys star had a new backup band, led by that long-haired genius Ron Abel on piano.  Sean Harkness, New York’s most versatile guitarist, was on board, along with rhythm ace Mark McLean on drums and Derek Nievergelt providing fine chops on an electric bass.

The set list was similar but not identical to Mr. Young’s August 2022 show we reviewed (click HERE).  With some new arrangements or modifications by musical director Ron Abel, the overall vibe was “new and improved,” though his previous band was also excellent.

The dynamic star, dressed in a gray suit over a black shirt and wearing his trademark shades, opened with a powerful 1950s ballad, “My Prayer,” made famous by The Platters in 1956.  His rangy voice was exceptionally beautiful here, and his big-note finish was thrilling.

Mr. Young went way back into the Great American Songbook for the Kalmar and Ruby standard “Nevertheless.”  After visiting classic Broadway for Rodgers and Hammerstein’s “I Have Dreamed” from The King and I, the star switched gears a bit with his excellent take on Roy Orbison song, “Only the Lonely.”  He stayed in a 50’s/early 60’s rock vibe with a set of four songs from his debut album, My Turn, all fan favorites he typically plays at all his shows.  In fact, John is a throwback, one of those extremely popular stars with an earned devoted following, and true talent that doesn’t require Auto-Tune or processing to sound as good live as he does on records.  The final tune of the segment, “Can’t Take My Eyes Off You,” is the linchpin of the show as he pivots to his Frankie Valli persona, the first sighting of which serves as a de facto “on switch” for the Jersey Boys devotees.  From this moment, the man could do no wrong.  Though when he first held out his mic to the audience, indicating he expected them to sing his part, there were “crickets,” so it took a little prompting.

Mr. Young gave himself a breather by giving his band an instrumental on Ray Charles’ “What I Say,” before launching into a pair of Jersey Boys songs, “Walk Like a Man” and the poignant “My Eyes Adored You.”  The many Jersey Boys fans in the audience (who are arguably bigger fans of the show than of The Four Seasons) were ecstatic. John regaled the audience with “behind the scenes” stories of the making of the film, which he promised to dole out throughout the residency.  Though these stories were familiar from his August show, he tells them, sotto voce, as if for the first time.

Turning back from Brill Building pop classics to Tin Pan Alley, John sang the bluesy, 1929 hit “Mean to Me” in an ethereal, 50s-style arrangement modeled on the late Nel Carter’s. He described this as the song in which he found his falsetto by copying Carter in the same key. This falsetto, of course, led him to nailing the Frankie Valli part in Jersey Boys.

Mr. Young closed out his set with a triple encore that included two more Jersey Boys blockbuster hits, “Working My Way Back to You” and “Sherry,” enlisting the audience to be his “Four Seasons.”

Attending more than one John Lloyd Young show is a strong guarantee of seeing familiar faces, including Jersey Boys expert Howard Tucker, and various people who’ve formed a community through their mutual love of this performer. John will often acknowledge fans by name. One of them, a Japanese woman named Yuki, surprised him with a gift at this show, which happened to be her birthday.  When he made the rounds of 54 Below during “Cara Mia” later in the show to shake nearly everyone’s hand or kiss his adoring female fans on the cheek, he seemed to recognize this reviewer from the August show, and gave me a hug mid-song.  While there weren’t many surprises in this show compared with the previous engagement, it was nonetheless eminently entertaining, and Mr. Young gave his faithful fans their money’s worth.