John Pizzarelli must have been voted “best all-round boy” in high school. The jazz guitarist, singer and leader seems to cover every aspect of entertainment in his shows, from jazz to pop to comedy, with a huge helping of standup, wit and shtick. He’s a delightfully old school entertainer with plenty of charm and substance to spare. Yes, the stories and conversational humor are tremendous fun, but Pizzarelli also is on top of historical back story and provenance, and he makes sure to give the songwriters credit for their work.

The Swing Seven earned their title with their opening and closing numbers. The former, a jivey uptempo “Just You, Just Me” (Jesse Greer & Raymond Klages), featured solos by trumpeter Tony Kadleck and the alto sax of Andy Fusco, as well as an extended and excellent scat by Pizzarelli. “Goody Goody” (Matt Malneck & Johnny Mercer) closed this feel-good variety show with stops-out swing jazz. Pizzarelli has a voice that can be described as intensely pleasing – he knows how to put over a song, be it swing, a ballad or a humorous ditty. In the latter category, several novelty songs were on offer, including “Rhode Island Is Famous For You” (Arthur Schwartz & Howard Dietz) performed solely with the fine rhythm section of Konrad Paszkudzki on piano, Andy Watson on drums and Mike Karn on double bass; and the cheerfully nutty “I Got Out of Bed on the Right Side” (Arthur Schwartz & Johnny Mercer). On the opposite side of the coin, the seriousness of Richard Rodgers and Oscar Hammerstein’s “You’ve Got to Be Carefully Taught” was communicated in a creative, gentle and effective version as if arranged by the collaboration of James Taylor and Mr. Rogers. 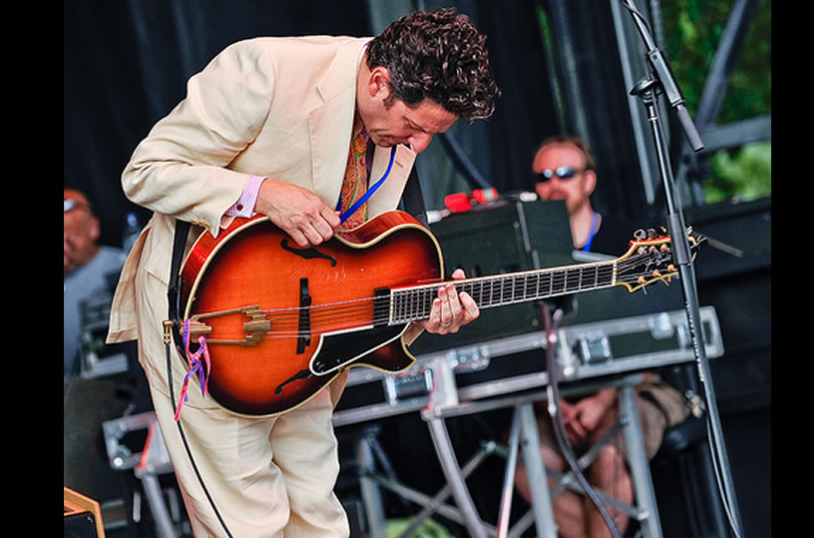 Homage was paid to George and Ira Gershwin with several numbers, including a slow and easy “I’ve Got a Crush on You” and a hard swinging “Lady Be Good” with solo turns by all the musicians, including Kenny Berger on reeds and the trombone of John Mosca. Johnny Mercer was honored with the novelty song “Jamboree Jones” performed in a Dixieland style, and with “Dearly Beloved” (Music by Jerome Kern) in the west coast style of Chet Baker and Gerry Mulligan. Pizzarelli is a Jersey boy and proud of it, so it was inevitable that a suite of songs by that “other famous singer from New Jersey,” Frank Sinatra, be featured.

Traditional big-band style arrangements included the toe-tapping “You Make Me Feel So Young” (Mack Gordon & Josef Myrow) and a slow and easy “In the Wee Small Hours of the Morning” (Bob Hilliard & David Mann). One of Pizzarelli’s many assets is that he chooses to perform music off the beaten path, such as a jazzy version of a lesser-known Sinatra-sung tune, “Ring-a Ding Ding!” (James Van Heusen & Sammy Cahn). In matters New Jersey, Joseph Cosgriff’s “I Like Jersey Best,” the penultimate song of the evening, proved an absolute high point. In this segment, the personable Pizzarelli was at his best, engaging the audience with savoir faire and an enthusiastic nod to really having some fun. As to this wonderful ode to the Garden State, never mind the superbly clever lyrics, or that Pizzarelli has made the tune an unofficial NJ State song, but his delivery of it took the proverbial cake. In a tour de force, Pizzarelli sang chunks of the song in the style of: Paul Simon, The Beach Boys, Bob Dylan, Billie Holiday, Lou Rawls, James Taylor, Dean Martin, Johnny Cash, Bobby Darin, Roy Orbison and that other Jerseyite, the Boss – Bruce Springsteen. New Jersey’s all-around boy, John Pizzarelli, sure knows how to put on a darn good show – a sure-fire pleaser for folks from all kinds of places in the world.