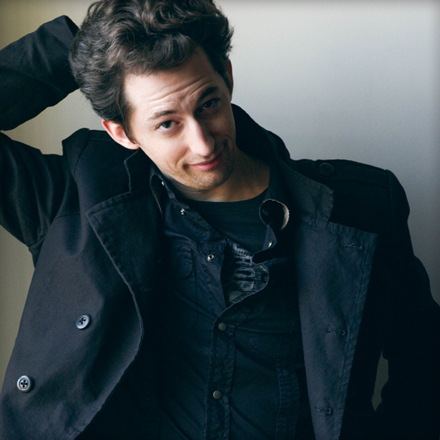 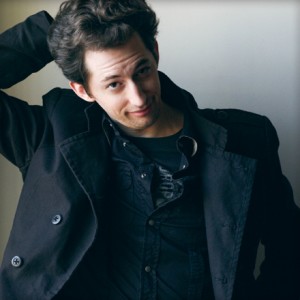 I was absolutely enchanted by Josh Grisetti when I stumbled on him playing the young Carl Reiner in York Theater Company’s Enter Laughing. Such get-up-and-go! Such style! Such sweetness! And I enjoyed him also in It Shoulda Been You, even though I found the plot manipulated and manipulative. So when I learned that Josh would be making his Cabaret debut at Feinstein’s/54Below I couldn’t wait to see what he’d do.

Backed by a big, brassy seven-piece band and appropriately outfitted in grey slacks, a white shirt, black tie and a grey vest, Josh opened the show with the peppy “You’re Never Fully Dressed without a Smile,” from Annie, reminiscent of a young non-dancing Joel Grey. He quickly informed us that this was night two of his first solo show at Feinstein’s/54Below and suggested we lower our expectations because he would be talking without any prepared script. Uh Oh!

His next remark struck me as curious, maybe even rude and disrespectful. He said that he found cabaret shows boring, adding he would attempt to alleviate boredom by intermittently reading random observations sent to him via social media. The first one seemed utterly pointless. Another one said that people spend two weeks of their lives kissing and one year looking for lost objects, an amusing bit of information, but disruptive.

Let me say here that I believe Josh Grisetti is a very talented guy, but I felt his show was distressingly ungainly. I found his non-scripted comments awkward and clumsy. I’m not a fan of gorilla cabaret. I really expect a well-crafted performance.

He spoke about his life. He’d graduated from the North Carolina School of the Arts and then The Boston Conservatory, where he switched from being the class clown to becoming an actor. And he was incredibly lucky. As a result of a showcase, he got an agent, got the part as the understudy to Noah Racy in Where’s Charley at the Goodspeed Opera Company which got him an instant equity card through a fluke in the regulations. After Josh told his agent that he wanted to act on TV, voila!, he was a regular in an ABC series, The Knights of Prosperity which ran for a season – long enough to pay off all his college loans! He was certainly happy about that!

Then came the lead in Enter Laughing at the York Theater which bound him for Broadway after Neil Simon saw him perform and selected him to play Simon’s alter ego Eugene in a revival of Broadway Bound. Poor ticket sales prevented that show from opening, but Josh eventually made it to Broadway in 2014 as the ex-boyfriend who gets the girl in It Shoulda Been You.

I enjoyed the final quarter of his show, particularly his delivery of “Send in the Clowns,” which made me feel there was a sadness in him that would have allowed him to play the son, Henrick Egerman, in A Little Night Music. His “That’s Life,” was just terrific and “Give My Regards to Broadway,” made me hope I’d soon see him as George M. Cohan. I found Josh Grisetti enjoyable and talented but his show was off-putting. I’m accustomed to see performers in cabaret that are really concerned about entertaining an audience. I felt he cared more about acknowledging his friends, dropping names and amusing himself.