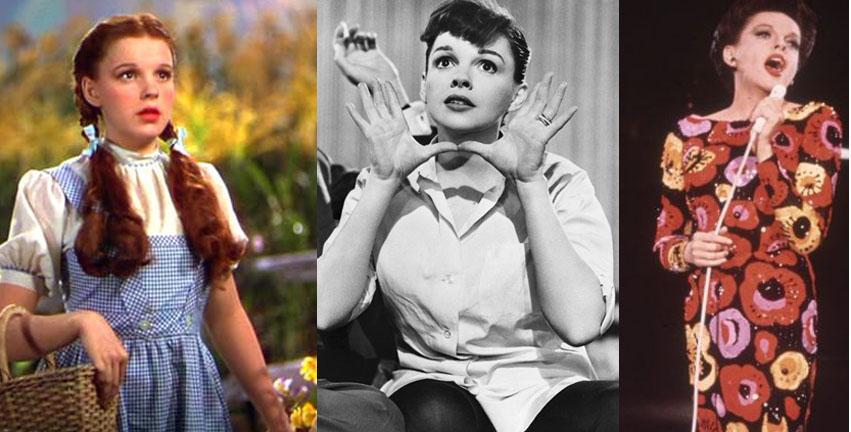 This evening’s salute to Judy Garland’s extraordinary 45 year career is bookended by “That’s Judy,” a parody of Howard Dietz/Arthur Schwartz’ “That’s Entertainment.” Penned by Jerry Herman, the song is performed by amiable co-hosts Klea Blackhurst and John Fricke. Fricke is an eminent expert on his subject, having written a shelf full of books about Garland. (He’s also the eloquent, unsung author of Mabel Mercer Foundations Award plaques. he song is fluid and specific. 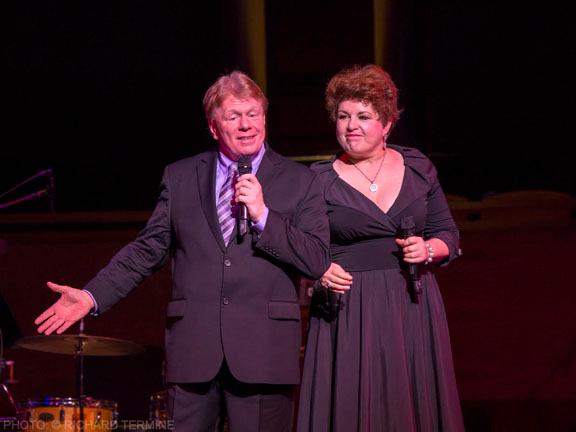 “2019 is the 50th anniversary of The Wizard of Oz, the 70th anniversary of Meet Me in St. Louis, and the 60th anniversary of A Star is Born– the good version,” he tells us. “As Donald Smith said at the opening of an earlier Garland Tribute, ‘Nobody tonight will attempt to imitate or try to sound like Judy Garland.” Performer credits (and advertisements) are notably absent. The show wisely chooses to concentrate on its honoree. Entertaining, illuminating anecdotes add immeasurably. Highlights follow.

Jennifer Sheehan’s “Once in a Lifetime” (Anthony Newly/Leslie Bricusse), with which Garland opened several important shows, gradually swells with self-realization in Sheehan’s hands. An attractively lilting “But Not for Me” follows. (George Gershwin/Ira Gershwin) This is a vocalist who connects with the audience. (Welcome back) James Followell-piano 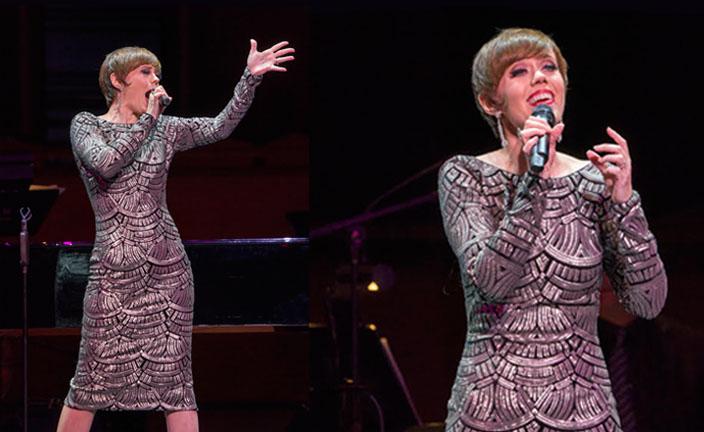 Carole J. Bufford, like a sparkler on good gams, offers “Lose That Long Face” in a terrific arrangement by Ian Herman. (Harold Arlen/Ira Gershwin) One of the few artists to move across the stage, she epitomizes vivacity. “It’s just a little early for this song…” introduces a warm, familial “Have Yourself a Merry Little Christmas.” (Hugh Martin/Ralph Blane) – Ian Herman-piano

Place winner in The Adela and Larry Elow High School Competition, new bright light Hannah Jane Peterson, ably steps back to the 1940s with “The Joint is Jumpin’ at Carnegie Hall.” Peterson, it seems, was inspired to her burgeoning career by the icon. In the thirty years he wrote for Garland, the song’s author, Roger Edens, also created such bespoke numbers as “Dear Mr. Gable,” and “Born in a Trunk.” Jon Weber-piano 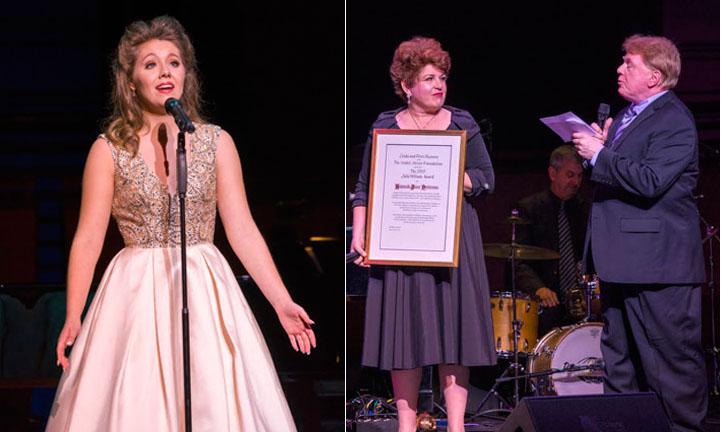 At the tender age of 18, Peterson is presented with The Julie Wilson Award (endowed by Linda and Peter Hanson), because, it states, she “…would earn the benediction of this award’s namesake.”

The gracious appearance of concert/opera singer Stephanie Blythe is a highlight. Ms. Blythe, who earlier this year volunteered to do a benefit concert for the Foundation, has, it seems, a soft spot for cabaret. “It’s a dream to be here tonight,” the vocalist tells us. 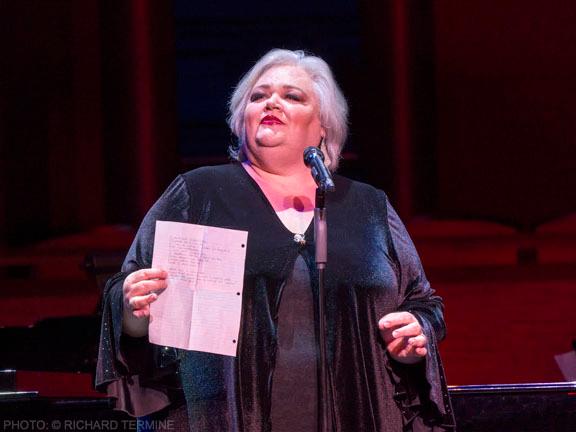 “If you don’t mind I’m just gonna take out my cheat sheet, she continues, reaching into her “stage purse” (bodice). Blythe then unleashes a galvanic “I Don’t Care” (Jean Lennox/Harry O. Sutton), joyously bouncing and swinging her arms. Between the first and second verse, she ceremoniously mops her brow “Madame Butterflies wish they could do this;” before the last, she tosses the lyrics over her shoulder. A wonderfully abandoned performance. The crowd roars. Drew Wutke-piano

“If there were still vaudeville and song writers like Irving Berlin, there’s no question this artist would be playing the Palace fifty-two weeks a year,” Fricke says introducing the beloved Sidney Myer. “When the Midnight Choo Choo Leaves for Alabam” (Irving Berlin) is predictably fresh and chipper. 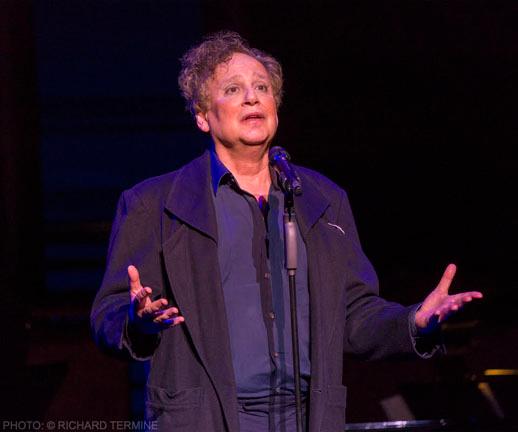 Garland was a kind of lighthouse to Myer during painful school years. He’s been devoted to her ever since. Asked to share a childhood story of his meeting the star, he tremulously lays himself bare. (Read my profile of Myer for the story.) By the time he segues into “It’s All for You” …I live for your sake…(John Meyer), emotion occupies every fiber, every lyric. I for one, have tears in my eyes. A remarkably moving performance. Tracy Stark-piano

A third home run is delivered by the splendid Karen Mason who was the first of several to request “The Man That Got Away.” (Harold Arlen/Ira Gershwin) The actress delivers a muscular, sensationally controlled interpretation. “There were four cities in the world Judy especially loved: New York, London, San Francisco, and this one…” introduces an equally dynamic “Chicago.” Wowza. Jon Weber-piano 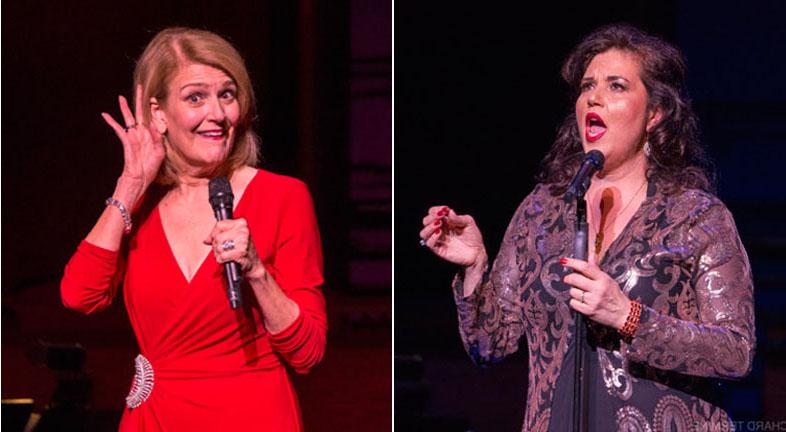 “A Pretty Girl Milking Her Cow” is an 18th Century Irish ballad rendered as swing by Garland in Little Nellie Kelley. (Additional lyrics by Roger Edens) Host Klea Blackhurst does admirable justice to the unexpected material, first, with Irish accent as a lovely folk tune, then morphing into inimitably resonant swing – Jon Weber-piano 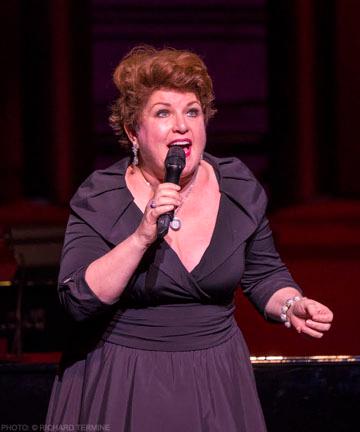 At this point, the lights dim evoking atmosphere in which we hear Garland’s own voice sing “Somewhere Over the Rainbow.” Due to technical issues, however, the recording stops after two lines. Veterans Blackhurst and Fricke spontaneously return to the stage and lead the audience in the song’s final verse. A graceful save, overflowing with bonhomie.