Julie Benko and Jason Yeager in “Hand in Hand” 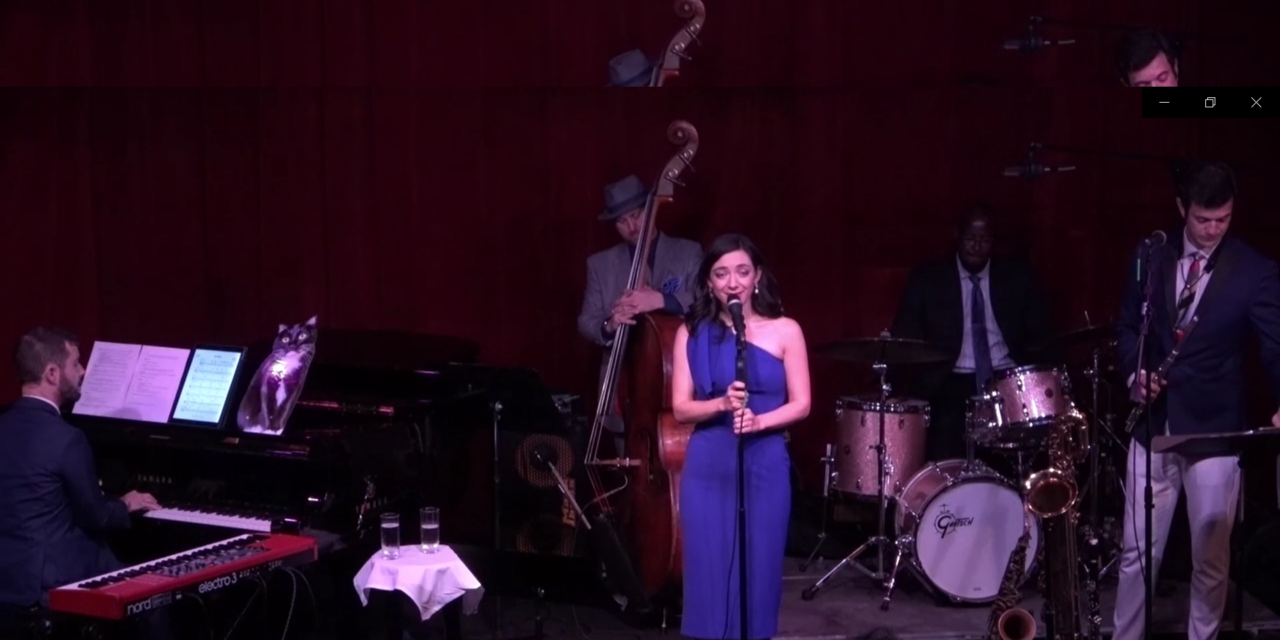 Julie Benko is having one hell of a year.  It would be fair to say that this is “The Year of the Benko.”  Prior to 2022, you likely did not know the name of this enormously appealing singer and actress.  But then came the hubbub when Funny Girl opened on Broadway.  Ms. Benko, the standby for Fanny Brice, then played by Beanie Feldstein, got her opportunity to fill in within days, and her voice, comedic timing and those big, fabulously expressive eyes were the talk of the town.  While the attention was new, her preparation was not.  Julie and her husband, pianist/composer Jason Yeager, performed throughout the pandemic on their popular “Quarantunes” livestream, and recorded their album, Hand in Hand.  This show, the album’s release event, presented most of the album, plus a surprise or two.  The show completely sold out well in advance, and had a sizeable livestream audience.

Hand in Hand is a delightful, intimate album with spare arrangements, consisting primarily of Julie’s voice and Jason’s keyboards, with all other sounds and instruments layered in by the couple.  At Birdland, the duo achieved a fuller, lush sound with the addition of the versatile Patrick Laslie on woodwinds, Michael O’Brien on bass, and Jay Sawyer on drums.  Jason, the more jazz-oriented of the two, shifted seamlessly between Birdland’s grand piano and his Nord Electro 3 (sometimes playing simultaneously); Julie is best known for musical theater.  Together, they created an entertaining, eclectic set that displayed the star’s ability to sing very diverse types of music.

Ms. Benko, wearing a one- shoulder blue dress, kicked off the set with a cold open of “Myself, and I” (Irving Gordon, Allan Roberts and Alvin S. Kaufman), a swinging traditional jazz number with just a touch of scat at the end.  The couple moved to the musical theater spectrum with “All I’ve Ever Known” (Anaïs Mitchell) from Hadestown, their favorite show.  There is much unspoken communication between the pair, and the love is palpable.

“Sweet Pea” was written by Mr. Yeager in 2015 to honor composer Billy Strayhorn on his centennial.  It is appropriately sophisticated with complex chromatic changes, reminiscent of Strayhorn’s “Lush Life.”  (The word “lush” even sneaks its way into the lyric.)  Mr. Yeager humorously quoted the opening notes of “People” in his piano solo, to everyone’s amusement.  Julie, who used her expressive eyes to their full advantage here, impressively sings with long, legato lines that require strong breath control.

A great deal of fun was had on “Louisiana Fairytale.”  Julie unveiled her “washboard tie,” an actual washboard percussion instrument in the shape of a tie.  The couple love going to New Orleans, and this song had a decidedly New Orleans feel.  Jason set his Nord keyboard to sound like a celeste.  While Julie played clarinet on the album (a skill she picked up during the pandemic), she left that job to Patrick Laslie here.  Astute listeners may recognize the tune from the original run of the PBS show This Old House, where Fats Waller’s recording of “Louisiana Fairytale” was used as its theme music for many years.

When the star discussed her audition self-tape for Funny Girl, she surprised everyone with the revelation that she hadn’t heard the score.  “This song is amazing! We were only what, 60 years late to the party.”  She approached “People” with a low-key approach, with just piano accompaniment.  It was quite the opposite of the Streisand arrangement, yet was quietly effective.

For much of this show, Ms. Benko seemed slightly restrained, perhaps because this was her “day off” from a week of Funny Girl performances.  She let loose, as did the band, on a hot version of “If I Were a Bell” (Frank Loesser, from Guys and Dolls).  Michael O’Brien’s bass sizzled here.  She then returned to the Fanny Brice character, performing “Second Hand Rose,” which the couple performed at the recent Cast Party with Jim Caruso anniversary show (reviewed here), along with a tap dancer from Funny Girl.  Jay Sawyer’s drums filled in for the tap dancing.  Julie continued in this unrestrained mode for the “final” song, a powerful, jazzy Janis Joplin song Mercedes Benz, with a bravura finish that showed off her powerful upper register.

Hand in Hand was a solid show, with fine performances by all.  Julie Benko is simply enchanting. (For this reviewer, the immersive experience of seeing her in Funny Girl on Friday and reviewing her show at Birdland three nights later was a personal highlight of 2022.) Her talented husband, Jason Yeager, is the perfect mutual partner. Their CD is available on Club 44 Records and can be found on the usual digital and streaming sites.  For more information about Julie Benko and Jason Yeager, visit juiliebenko.com and jasonyeager.com, respectively.  For more great shows at Birdland, visit birdlandnyc.com.

Julie Benko and Jason Yeager in “Hand in Hand”

Photos from Birdland’s livestream on flymachine.com