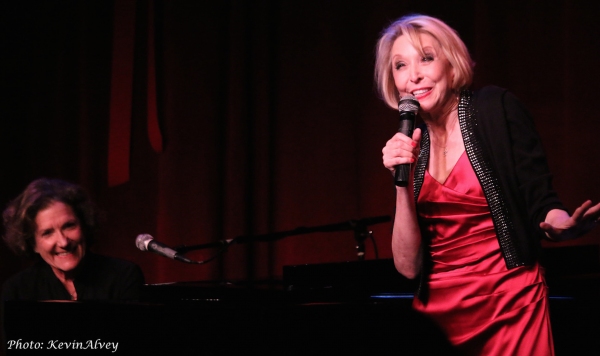 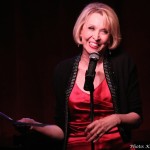 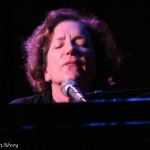 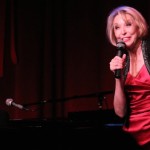 Julie Halston, the beloved comic actress and the award-winning songwriter, Julie Gold cobbled together a genteel, moving and very entertaining show at Birdland the beginning of December, their first time together after well over a decade. Their duo showing was part of Jim Caruso’s Broadway at Birdland series.

The program was divided pretty much equally between the “song stylings” of Ms. Gold, the creator of the phenomenally successful “From a Distance” (which, of course she performed), and the comedy bits of Ms. Halston who revived her popular signature Wedding Notice routine in which a verbatim reading of a New York Times wedding announcement becomes hilariously surreal. Ms. Gold accompanied herself on the piano.

They began with a duet about the need to clear away possessions like old People Magazines and long-unworn clothing, which included the telling line, “When is it enough, already? They chatted about their lives, kitchen renovations, facelifts, Broadway shows and their bucket lists. Julie H told about her “starring role” as a body in Silence of the Lambs and running into a very pushy, rude, self-involved Elaine Stritch. She also channeled Joan Crawford, reading from Crawford’s inadvertently—and sadly—funny advice book “My Way of Life,” which tells women to drop friends if they get in their way!

Julie G’s songs ranged from a comic ode to Roscoe, the bedbug-sniffing dog, to a gentle, childlike “Come to Me as a Bird,” imagining the reincarnation of a beloved pet cat in avian form. Her “Good Night, New York,” though a tad overlong, was a poignant remembrance of her mother’s life journey.

What better way to end the show than “From a Distance,” the once ubiquitous anti-war song, whose meaning still reverberates today.

Let’s hope that these two get together for chat, comedy and song way sooner than a decade!