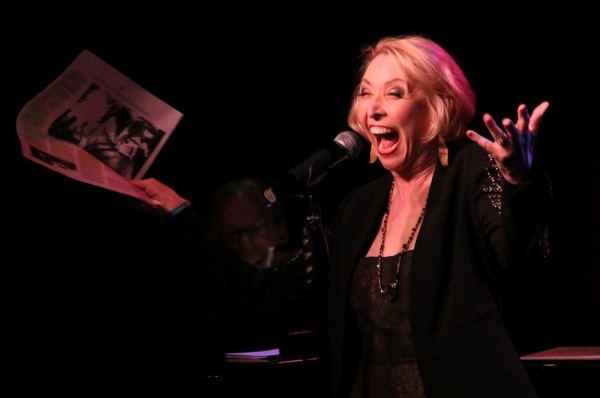 “Sit back, relax, Mama’s gonna read.” The lanky instantly recognizable and inviting presence of Julie Halston, described as “a cross between Joan Rivers and Hayley Mills” (and I’d add with a vocal delivery that has blended delightfully over time with that of her great friend and colleague Charles Busch), regaled a full house for a Monday night set as part of the Broadway at Birdland series. No singing, no dancing, just Halston, in one, with books and pamphlets and journals and clippings to one side. Our gal of the hour, just as comfortable on a Broadway stage as a downtown bistro, performs her cabaret at the Birdland jazz joint, perched on a stool, delivering pieces selected from moments from her life and the current world – in the written word.

There are delicious precedents for this “reading from the paper” idea as a stage act, from Will Rogers who brought his down home “aw shucks” style and incisive mind to his newspaper-inspired standup act in the Ziegfeld Follies, to Hallie Flanagan’s Federal Theatre Project’s Living Newspaper productions in which newspaper stories were portrayed on stage.

Like Rogers, Halston provides dramatic readings of the pieces that inform her cabaret act. This isn’t a structured monologue in the lines of Spaulding Gray or Mike Daisey or Anna Deavere Smith. Rather, Halston shares her pieces with us, like a beloved professor who has just assembled that day’s class from her books with pages are interleaved with well-worn familiar notes, sometimes yellowed with age, that she now reads aloud. You imagine Halston gives herself the freedom to select from the ordered pile of books and pamphlets and clippings she has set beside her for possible inclusion in the show. There’s a sense of thoughtful serendipity in this act, and it feels delicious.

First stop is a ragged edged paperback pink covered edition of The New Saint Joseph Baltimore Catechism, the book that rocked her terrified seven-year-old world. Intoning as she was taught “by my fault, by my fault, by my most grievous fault,” Halston’s wide-eyed wonder and terror evokes the terror of her early training, and we laugh with her and are also a little terrified when she repeats in her classic deadpan: “I was seven!”

From child catechism to adolescent journal to high school yearbook to a favorite documentary she knew by heart (Grey Gardens and Little Edie Beale’s endless parade of verbal wonders such as “Any year with ‘8’ in it I’m not apt to do well” and “I have to go now, I have to put makeup on, a hurricane’s coming”), we learn about the Halston pre Vampire Lesbians of Sodom.

We enter the New York Times wedding announcement and “Vows” reading era gingerly, a long-time part of Halston’s act for which she has achieved a measure of renown. She reports early readings to herself, as a young woman from the suburbs, of these announcements with the multiple names and multiple generations and people who “summer” and volunteer. “No one had a job!” Once she began reading the pieces aloud, the laughter came instantly. The substance of the stories brought a different kind of realization. “That’s when I realized the world was very different than the way I grew up.”

A delightful surprise comes at the show’s midpoint – a letter Halston was given by an unnamed general manager, who had received the missive from a disgruntled patron. The lessons Halston is sharing, between the laughs, is that “the people with the real power are the audience.” The disgruntled patron enumerated costs for driving in and parking and happiness with the quality of the performances but dismay at the lack of pizzazz. There weren’t enough sequins on the costumes; the look wasn’t flashy enough. “Pizzazz is Broadway,” this patron instructed and harangued in her letter. Imagine that in Halston’s voice. It brought down the house.

This kind of piece is especially suited to the boîtes and cabarets that made New York night life famous. Halston allows us to delight in the present, enjoy a journey through her past, and appreciate a delicately honed delivery of an often hilarious act.