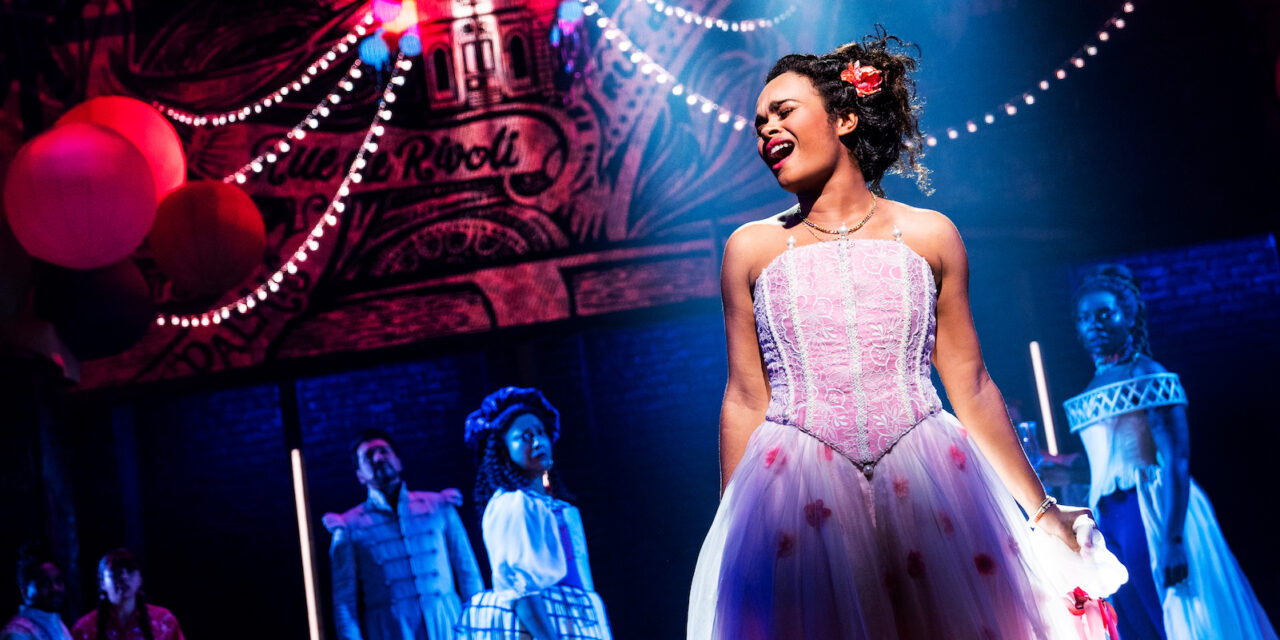 Life is about second chances. So believes Juliet Capulet, the once tragic female protagonist of William Shakespeare’s Romeo and Juliet, who steps out of 14th century Verona and into 21st-century empowerment in the kaleidoscopic, riotous & Juliet, currently delighting audiences at the Stephen Sondheim Theatre.

The upbeat, modern themes of this award-winning musical flip fate on its doomed head. Juliet (the magnificent, gobsmacking Rachel Webb who covered for Lorna Courtney when I saw it), reclaims her destiny and refuses to “die for love.”

Superbly directed by Luke Sheppard, Read and Martin’s hit-filled jukebox comedy/farce is downright subversive. Shakespeare (the hysterical, on-point Stark Sands), out of love for his clever wife Anne Hathaway (Betsy Wolfe is LOL amazing), collaborates with her as they reshape his newest play, which she feels works better as a comedy. This occurs only after their introductions to the audience in “Larger Than Life,” and their argument about her revisions in the funny “I Want It That Way.”

Anne and Will write new outcomes with the help of the characters. The audience gets to watch as their final revision becomes a luminous, comedic musical retitled Juliet and Romeo. This only occurs after the complications, jokes, plot gyrations and kinks have been ironed out and another 29 songs (one original and 10 chart-topping Martin winners), have been seamlessly added.

It’s through Read’s and Martin’s prodigious efforts that the selected hits weave beautifully with the book’s action and characterizations, so few lyrics were changed. Read listened to Martin’s pop numbers of love’s heartbreak and allowed them to inspire him toward Shakespeare’s iconic love story, revamped.

The Shakespeares add wealthy Lord Lance (Paulo Szot’s performance is scene-stealing), and his son, the shy François (the fine Philippe Arroyo). Anne and Will modernize Will’s former characterizations beyond the folkways of 14th-century Verona, so we appreciate how the leads become more insightful, self-determining and understanding.

Paloma Young’s costume design brilliantly reflects the fusion of the 14th century, Shakespeare’s Renaissance and the modern with suggestions of punk rock (i.e. Romeo’s jacket), and a nod to the pop songs’ shimmering notes and colors of romance and hot passion. Check out the beautiful scenic design and costumes during the bedroom scene between rekindled former lovers Lance and Angelique, Juliet’s nurse.

As a result of Anne’s input and the hair-brained events that unfold, there are heightened passions and two new love stories, three if you include the uplift of Anne’s and Will’s marriage experiences.

When the dust settles, we note that Martin and Read’s ingenious romp offers up a musical within a musical. The structure allows the principal characters like Juliet to write their own lines and sing with glory and power the superb orchestrations and arrangements by Music Supervisor Bill Sherman. With the excellent sound design by Gareth Owen, I heard and understood all the lyrics and the actors’ humorous lines. This is not your average “jukebox musical.” It has its own unique stylization with avant-garde flavors that are rich and always surprising.

Indeed, what makes & Juliet engrossing and fun is the book’s immediacy, the performers’ incredible voices and Martin’s recognizable, tuneful numbers. For those who enjoy the profound, the musical’s themes boast timely, current explorations into women’s talents and genius. The enlightened Will and the other males don’t resent the women as offensive or “scary.”

Thus, Will listens as Anne explains her vision for the new ending. Juliet and the players enact it, and we get to enjoy the new version. For example, after Juliet wakes up to her dead husband (“Baby One More Time”), instead of killing herself, an ensemble member takes away her knife. In the next scene, the Shakespeares have Juliet go to Romeo’s funeral, where she discovers Romeo had many relationships with both men and women. This inspires Juliet to sing (“Show Me the Meaning of Being Lonely”).

To help her escape her parents and a mournful Verona, Anne writes in a new character, Juliet’s friend May (the funny Justin David Sullivan), who is non-binary. This prompts an occasion for LOL dialogue between Anne and Will. Encouraged by Sheppard’s sharp pacing required for Read’s Shakespeare-esque puns and riotous one-liners the actors are on-point and keep the events popping for maximum audience engagement.

May and Juliet’s nurse (the LOL Melanie La Barrie portrays the raucous, heavily accented Angelique), make plans with Juliet to escape as they sing “Domino.” Anne writes herself into the play as Juliet’s friend ‘April,’ and Will injects himself into the role of carriage driver.

Their spectacular road trip to Paris (“Show Me Love”), is whimsically created in a fanciful carriage colorfully accoutered. Soutra Gilmour’s scenic design, Howard Hudson’s lighting design and Andrzej Goulding’s video and projection design create movement through projections on the back wall, as the carriage journeys on a turntable center stage. The turntable is also employed during Jennifer Weber’s energetic, athletic choreography and various songs which include some break dancing and pop-music style movement and dance.

Juliet and Angelique strike out for a new life in Paris with the Shakespeares on an adventurous romp. There is no spoiler alert except one. Will’s ego, in conflict with Anne’s, has him resurrect Romeo in Act II. And it is this complication that fires up the farce to its high-energy Act II and mesmerizing conclusion. As Romeo, Ben Jackson Walker’s gorgeous voice and expert delivery of some of the funniest lines are superb.