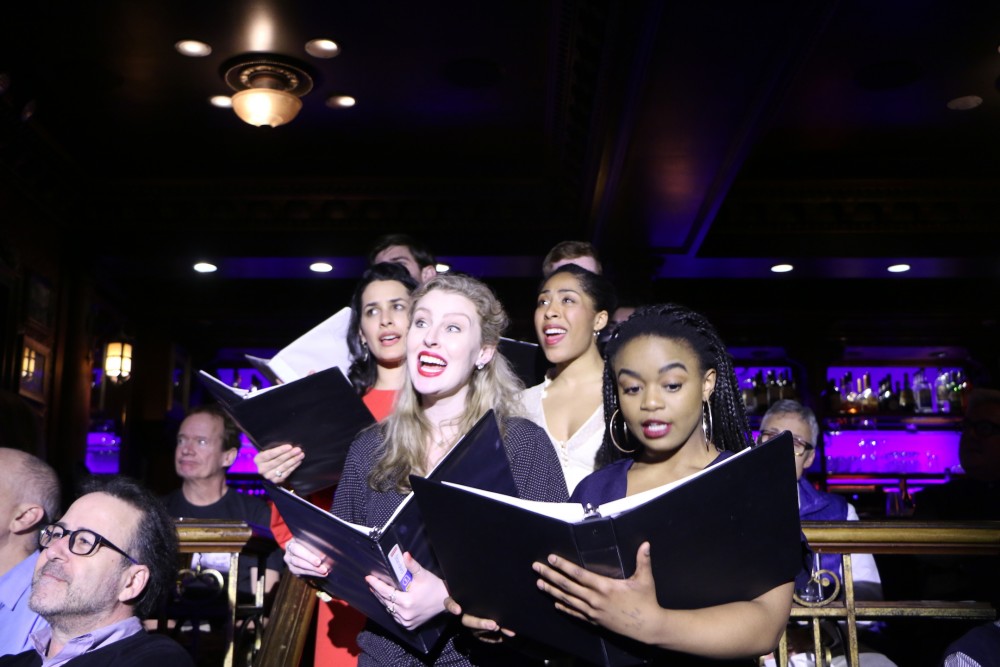 Having seen my first Broadway musical as a child in 1967, I have always been sorry that I missed the 1968 musical The Happy Time. With a score by John Kander and Fred Ebb, its original cast album is one that makes you wonder why the show didn’t last longer than its 8-month run. It’s fresh, inventive and melodic, and featured a great starring role for Robert Goulet, then at the height of his leading man status and singing power. Co-starring, was the never-less-than sensational David Wayne, and it introduced a sixteen-year old actor from Los Angeles, winning his part over a thousand others, in a search director-choreographer Gower Champion felt essential to casting the role properly.

Last night that young actor, Tony Award winner Michael Rupert, directed and hosted a 50thanniversary celebration of The Happy Timein a one-night only concert at Feinstein’s/54 Below. It gave us a chance to listen to its robust score, sung by a legion of gifted people, as well as to hear some of Rupert’s personal reminiscences, which had him questioning if the calendar was correct: could it really be fifty years? It didn’t seem possible to him, nor to us either, as Rupert still sings with that unique, dulcet sound, unlike anyone else in the musical theatre, and looks sensational for a man of sixty-six. It was a joy to hear Rupert’s stories of how he won the role, learned professionalism from his supportive co-stars, and even what his mother said to him immediately upon coming offstage after singing and dancing on the nationally televised Tony Awards broadcast (“You’re really not going to be an orthodontist, are you?”), all of which added a classic touch of warmth and nostalgia to the proceedings.

With Eugene Gwozdz at the piano, the singers who stepped up to the mikes ranged in age from thirteen to past four score and ten. Disregarding age (as well as gender), as to how the songs might previously have been performed, made for some delightful surprises. Peyton Lusk, of Bar Mitzvah age (and recently the star of the Musicals-in-Mufti production of Jules Styne’s Bar Mitzvah Boyat the York Theatre), wonderfully reinterpreted Rupert’s lovely solo from The Happy Time, “Please Stay.” And what made it all the more poignant, was watching Rupert up stage left, perch on a chair in his role as narrator, observing this young man’s wholly original way with (what was once) his song. Rupert also stepped in as the character of Jacques from time to time, singing numbers first introduced by Goulet. But when it came to the showstoppers, it was two women who took the stage in ways that only seasoned pros such as they are capable. Tony Award winners Karen Ziemba and Debbie Gravitte showed what makes them the lethal talents they have been throughout their careers. Singing The Happy Time’s best ballad, “Among My Yesterdays,” Ziemba’s plaintive understanding of Fred Ebb’s beautiful lyric conveyed complex and deeper meanings to a song I’ve heard many times. Gravitte’s comedy timing and exuberance made “The Life of the Party” just that. Entering through the audience and interacting with patrons at their tables, Gravitte’s mix of insouciance and irreverence led the way to the show’s ensemble stuffed onto the tiny 54 Below stage as if they were all playing the Winter Garden. In addition, there were welcome contributions from Jim Brochu, Janet Metz and Jim Walton—veterans all. And I was particularly by taken the charms of Kara Lindsay, Jesse Markowitz, Nic Rouleau and A.J. Shively, all of which added up to … well, a happy time.