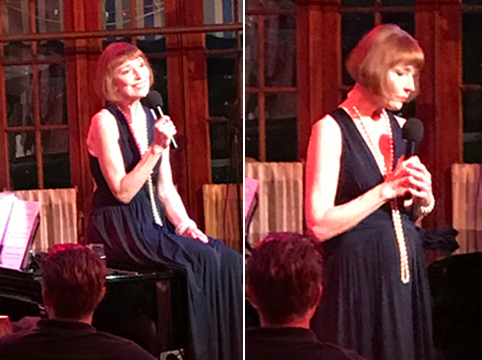 Karen Akers eases towards the stage with playfulness that implies. This is an artist who can sing …my life was simply hellish… ridiculing pretense with attitude. (“I’m Throwing a Ball Tonight”) Who else would roll the “r” in paprika?! Knees bend, an endless arm swings…She almost emits bubbles. “This feels like a party.” So it does.

By the age of 10, Akers had memorized all the songs on her mother’s one Cole Porter album. It was, however, years into her substantial career before garnering sufficient confidence to perform them. Remember, this is an actress. Even a number like “Don’t Fence Me In,” ordinarily tossed off as slight, arrives with thoughtful comment about its being more than a cowboy song. Akers doesn’t just sing, she explores lyrics. You may not hear it the same way again.

Peppered with brief personal comments and well chosen quotes, the show offers wry, romantic, exuberant, and wistful material reminding us of Porter’s range and the vocalist’s skill as a storyteller. A clever, updated version of “Anything Goes” (Joe Keenan) is enhanced by Akers’ subtle mockery.

During the snappy “Come to The Supermarket in Old Peking,” it’s as if she’s seeing and often smelling wares. The audience become tourists. “We often hear about fabulous dinner parties, but rarely from the point of view of an hors d’oeuvre” introduces a sweetly deadpan “The Tale of The Oyster” that sounds like an upper crust fairy tale. All that’s missing is animation. “What is it that’s so seductive about a beguine? We hear … passion, but tinged with melancholy.” Starting in a stage whisper “Begin the Beguine” emerges slowly, savored. At …swearing to love forever…her lowered hands make determined fists; articulate eyebrows shift, otherwise the performer is still, all emotion directed toward a vocal that becomes sheer torch.

Curiously, I don’t believe Akers’ version of “It’s All Right With Me” which doesn’t seem at all as if it is (all right.) Arriving on a beautiful roiling arrangement, the number is a lost opportunity.

Like Porter, the performer is an ardent Francophile. Her Paris Suite: “I Love Paris,” “You Don’t Know Paree,” Who Said Gay Paree,” and Allez-vous-En” (in English and French) is clearly heartfelt. Akers understands the power of genuine, unfussy sentiment. Songs shimmer. Inclusion of the signature “Non, je ne regretted rien” (Charles Dumont/Michel Vaucaire), though beautifully performed, is, to me, superflous here.

An infectiously gleeful “Ridin’ High” emits sparks, while the understated, “Take Me Back to Manhattan” returns, aria da capo, to (champagne) bubbles. Warmth is palpable.

At the piano, Alex Rybeck is bankably swellegant.