Karen Akers: Water Under the Bridge 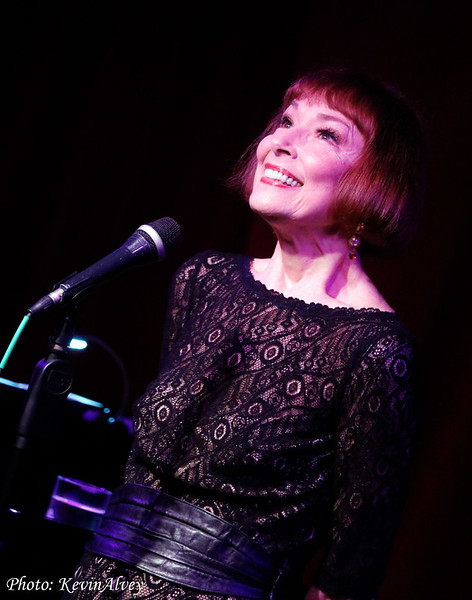 The legendary cabaret chanteuse Karen Akers reprised her acclaimed Water Under the Bridge show to a near-capacity crowd at Birdland Jazz on September 12th. The Tony-nominated (Nine) actress took a lifetime of songs and stories that were intimate and revealing, through which she let us into her inner world so candidly as to take one’s breath away. The largely autobiographical show was brilliantly directed by Sara Louise Lazarus, with exceptional music direction and accompaniment by Alex Rybeck, with Tom Hubbard on bass.

The statuesque Ms. Akers, elegantly dressed and with her trademark pageboy haircut, opened with a lovely medley of “Among My Souvenirs” (Horatio Nichols/Edgar Leslie) and “Walking Among My Yesterdays” (John Kander/Fred Ebb). This pairing brilliantly set up the evening’s story: everything that came after was a rather personal souvenir of a relationship, of a specific time or event, or a life change that she could now reminisce about from an older and wiser perspective.

“I’m Checkin’ Out” (Shel Silverstein, from Postcards From the Edge) was a pithy country song that took the Elvis hit “Heartbreak Hotel” and turned the lyrics inside out:

I’m checkin’ out of the heartbreak hotel.

I ain’t gonna live on lonely street no more

Ah, but why was she checking out? Karen’s first big reveal was that her first husband, Jim Akers, came out as gay well into their marriage. More than anything, he had wanted to be a father. Indeed, they had two children together, and she still has his last name. Now, singing a devastatingly heartbreaking rendition of the 1970s AOR hit “Sometimes When We Touch” (Dan Hill/Barry Mann), some of the lyrics seemed written just for them:

You ask me if I love you

And I choke on my reply

I’d rather hurt you, honestly

Than mislead you with a lie

(For the record, this is the first time this reviewer has gotten emotional hearing this song.)

A trio of songs written by Craig Carnelia let the star share her life from young mother and wife to divorced, lonely lady. Karen Akers’ superpower is making songs like these sound like “special material” written just for her. “Just a Housewife” came off as a powerful statement, almost a march. In “I Met a Man Today,” one had the sense of a diary entry, or a letter written to a far-away lover, confessing an affair that meant nothing to her, while “You Can Have the T.V.” was a wryly funny post-breakup list song about a couple amicably but sadly divvying up their marital home and possessions. She sings, most generously, “You keep the dog. I’ll come around to see him now and then.”

Her role in Nine as Luisa Contini, the wife of promiscuous film director Guido Contini (Raul Julia) dramatically changed the trajectory of her professional and personal life. She instructed the audience, “I need each and every one of you to become the press, and I shall do my best to explain . . . my husband.” She sang “My Husband Makes Movies” (from Nine; Maury Yeston), a song that is in essence a press conference put to music.

The star described her second marriage, which also was not permanent, but noted that “both of us were willing to risk love.” It was all “just water under the bridge,” a segue to the show’s title song, “Water Under the Bridge” (Stephen Sondheim, from Singing Out Loud). Karen pleaded to “Whoever You Are” (Tom Snow/Amanda McBroom) to show his face, since she was “Ready for Love,” which sounded like an Erma Bombeck essay with lines like, “When my teeth are rinsed in a glass by my bed, and my hair lies somewhere in a drawer,” but was written by Mike Stoller and Jerry Lieber, the same songwriters who wrote “Hound Dog” for Elvis. Karen was prepared for a new man to “Take Me As I Am,” a lovely song written by Alex Rybeck with lyrics by Barbara Fried, who is still writing wonderful lyrics at 97!

The star’s powerful reading of Edith Piaf’s “Non, Je Ne Regrette Rien” was the perfect capper to the story. For all the ups and downs of her personal life, she could sing with confidence (and in perfect French) that she did not regret a moment of it.

A standing ovation garnered an encore. Ms. Akers’ mother loved to sing, in a low baritone that inspired Karen to call herself a “dramatic tenor,” though she confessed to being a “failed mezzo.” Her encore of “If I Sing” (David Shire/Richard Maltby, Jr.) was, to an extent, special material, in that she asked Mr. Maltby if she could alter the lyrics so she could sing it for her mother, who passed away in 2021. It was a beautiful coda to a fine evening of cabaret.