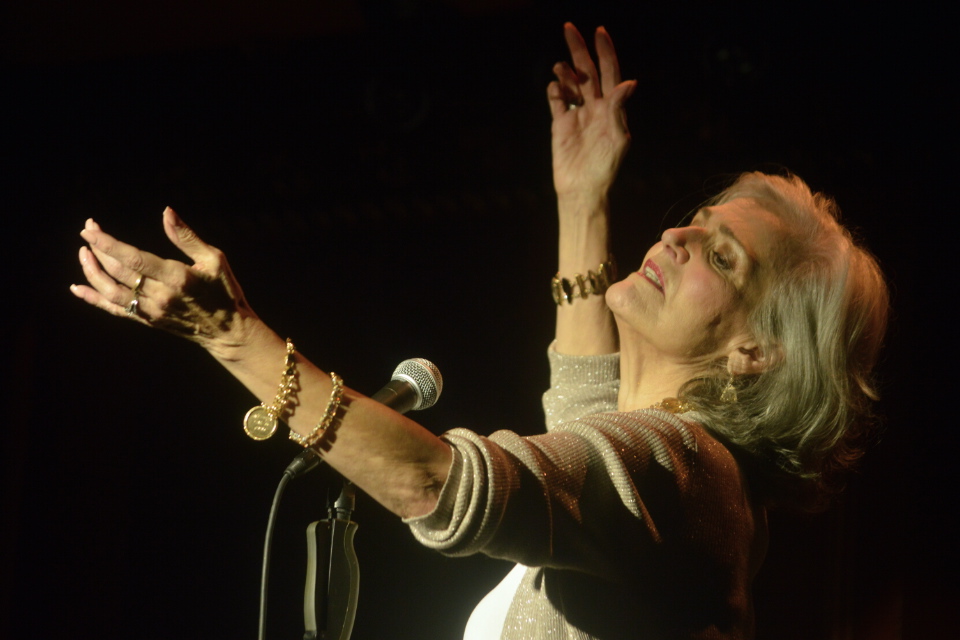 Back in November 2021, after a the long lockdown-induced live-performance drought, Karen Mason was back on stage at Feinstein’s/54 Below. Her long-awaited Birthday Bash show was a hot ticket. There was a wait-list miles long and certain people were rumored to be trying to sell their grandmothers to get in. The lucky ones experienced an unforgettable show. The unlucky ones could only dream, and then got to hear about a night never to be forgotten.

But patience has its rewards and behold, Mason decided to do it again, much to the delight of those of us who could only press our noses against the window last Fall. We’re happy to proclaim that those reports were spot on. Mason was dazzling, sharing favorite music, stories and plenty of joy. The original Birthday Bash was supposed to happen in March 2020, before COVID closed the door on it. Two years on, the object of that show, a big birthday, has passed. But no matter, toasting this ageless star of Broadway, recording, concert halls and television needs no special hook—Mason is a delight on any day of the week in any week of the year. Besides, there was her very new CD, Let The Music Play, to be celebrated!

In addition to major talent in acting and singing, Mason is genius at comedy. It’s all in the timing. Her delivery of quips, off-the-cuff remarks, witticisms and adjusted lyrics is priceless. Thanks to director Barry Kleinbort, there were several of these tailored lyrics, such as a pandemic version of Jonathan Larson’s “Seasons of Love” and “Karen’s Back in Town” (with a nod to Harry Warren and Al Dubin’s Lulu). Self-effacing and wry, she spoke about her first post-lockdown gig—in a funeral home. She told the story of her appearance as the only vocalist among 61 dancers in Jerome Robbin’s Broadway, the 1989 stage wonder in which she sang (as she did here) Irving Berlin’s “Mr. Monotony.” The humorous kick came in the revelation that this in-the-spotlight tune won a Tony Award—for Debbie Gravitte, whom she replaced. Mason resurrected the title tune, by Harry Manfredini and John R. Briggs, from her first Broadway show, the open-and-shut Play Me a Country Song, drolly claiming it hadn’t been heard since.

In song, Mason’s exceptional timing translates to a perfection in phrasing. From her first “giglet” on Facebook, during lockdown, she rendered a poignant, beautifully phrased “You’ve Got a Friend.” Paul Simon’s “The 59th Street Bridge Song (Feelin’ Groovy)” was a delight, with long-time music director/pianist Christopher Denny and bassist Tom Hubbard contributing vocals. Hubbard is also one of the most accomplished bow players in the business on the upright, and his on-the-melody accompaniment for “Over the Rainbow” (Harold Arlen, Yip Harburg) was a treat. Denny and Hubbard proved ideal partners for Mason’s style and her song choices; the synergy, in addition to masterful musicianship, was quite fulsome in its own right—no extras needed.

Another big chunk of Mason’s appeal is her ease and sincerity. She’s like your very talented best friend just happens to be on stage. Her accessibility opens doors to the heart, making her storytelling ability—her interpretive skills—that much more powerful. Mason not so much sings a song as inhabits it fully. In a masterful rendition of Sunset Boulevard’s “As If We Never Said Goodbye” (Andrew Lloyd Webber/Don Black), she became Norma Desmond. Equally emotive and extraordinary was The Rink’s “Colored Lights” (John Kander/Fred Ebb) in which Mason painted a powerful visual imagery with each deeply felt word.

A charming encore and thanks sequence, of course included, “Let the Music Play” by husband, Paul Rolnick, and David Friedman. It was followed by a heartfelt “In My Life” (John Lennon, Paul McCartney). At the top of the show, Mason revealed that, at this point in time, she’s decided to renew her dreams, make more music and seek out new adventures. To this, we say brava—go for it, as we look forward to many more years of Mason magic.